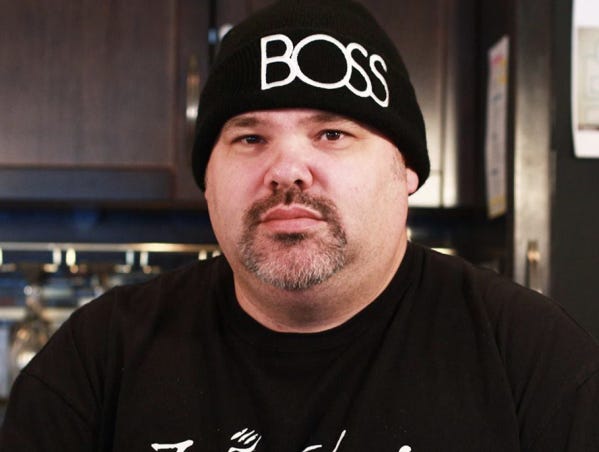 NATIONAL POST - dtudents at Wilfrid Laurier are outraged after the operator of a popular campus café was fired for posting a tongue-in-cheek ad looking for a “slave.”

Sandor Dosman, who runs Veritas Café at the Waterloo, Ont., university, said the school’s Graduate Students’ Association called him into its boardroom on Monday, showed him a copy of the ad he posted and terminated his contract.

“I had the ad in front of me, saying, ‘What was it? Was it the word slave? Was it the word kill? As in try not to kill our customers?” he said. “I dug a little bit and said is there something more to this? But they just said, ‘No, it’s because of this ad,’ and that’s it.”

The student group had two security guards escort Dosman off campus. The café, which was set to close next week for the holidays, was shut down, too.

Not to kick a guy while he’s fired, but he’s probably not the “boss” that his beanie claims him to be if he can get the axe from his lunch lady position after posting a questionably worded ad. The devil here, of course, is in the details. If he said something racially sensitive surrounding slavery, that would make some sense. But he didn’t. At all. It was so clearly a joke that it’s infuriating. Here’s the exact ad. 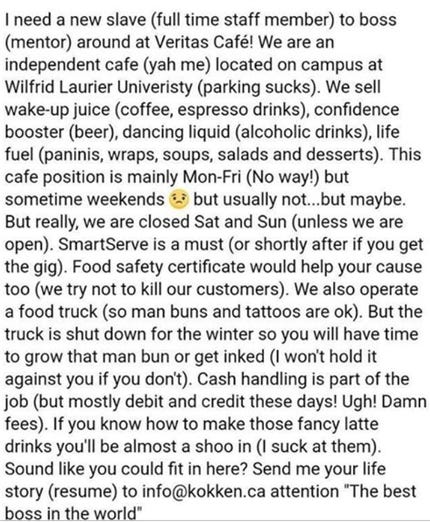 That was the most tame, least offensive, most milquetoast, least troublesome ad I have ever seen. The Pussification of America’s Hat is in full swing. America’s universities aren’t the only ones that are overrun with over sensitivity about every last bit of language. There was probably someone on in the Graduate Student’s Association who had a man-bun and felt triggered because of his derogatory reference to them. I’m surprised they didn’t fine him for saying that he sucked at making the fancy latte drinks. No self-deprecation around here! It’s a full blown war on comedy and it’s manifesting itself in every nook and cranny of our precious society.

Good thing the had security escort him off of the campus though. We can’t have maniacs like that running amok through lunch lady land.