Wouldn’t it be sick if the NFL were run like top European football clubs, where players were scouted into farm systems when they were like 5-years-old and bred to do nothing but play football. We could drop this whole charade of getting an traditional education for people whose lives are clearly going to be dominated by the game of football. Having little-kid-farm-systems would take power from one evil organization, the NCAA and give it to another one, the NFL, but it would be make a lot more sense for kids didn’t go to play school. 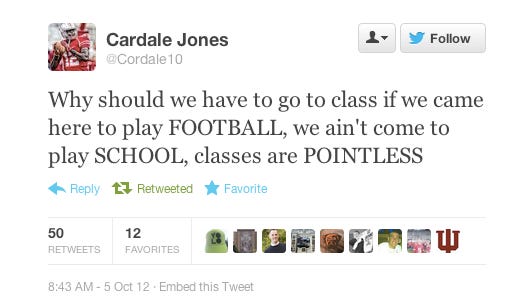 If we could just plug kids into a feeder system, this kid would be a prime prospect. Grinding it out in the parking lot like this would give the Eagles the toughness they’ve lacked since they played on the concrete canvas of Veterans Stadium. And you know who else I’m scouting out there? That chair they had lined up at left tackle. Those four sturdy legs are three more than Jason Peters has, and as an inanimate object, he might be able to teach Peters a lesson or two about pre-snap movement.

This is also a case of great parenting. As if having a great work ethic weren’t enough, having a father who will introduce him to steroids at a young age is a sure fire way to guarantee a spot in the the pros.

While your kid is probably out somewhere flipping off a stranger out the back window of a bus, this kid is out flipping tires like JJ Junior, and his pops is flipping the stereotypical narratives on African-American parenting.