I thought Roger Goodell was riding a hot streak recently. After solving breast cancer, domestic violence, and getting to the bottom of a second deflate-gate in record time without costing a penny in legal fees, it looked like smooth sailing ahead for the NFLs head honcho. But after Sunday nights debacle I am left with the conclusion that Goodell might possbly be going too soft on players, perhaps after getting to know too many of them.

Roger Goodells decision to not supsend Ezekial Elliot for leaping into the salvation army kettle could start a detrimental ripple effect in America’s youth. Football is a copycat league, and the millions of kids at home could think that its “swell” or “cool” to jump into the first cast iron cauldron that they see. Goodell could of sent a important message about kitchen saftey but instead all he’s done is encourage our nations youth to go ahead and get really into pot. Folks I thought we learned our lesson from the last Ohio State running back that immersed himself in Ketel. 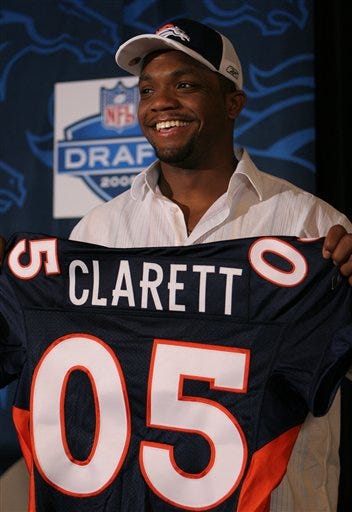 Kind of ironic how the NFL gets in trouble for advertising for the miltary, but Ezekial Elliot is allowed to tell people to donate their money to a army that francly, would get there asses kicked by the French. Maybe Elliot needs to spend more time worrying about how to ring the other guys bell instead of his own.

You have to admit its rich that Elliot all a sudden pretends to care about feeding the hungry when his first down celebration is literally a dance where hes wasting food:

Perhaps Elliots “look at me” touchdown antics would ring just a bit truer if he carried his passion for feeding others into the rest of his game. Instead he pretends to eat like a toddler when there are starving children all over this planet who would of killed there own parakeet for a few drops of the soup or cereal milk that Elliott glorifies spilling during his signature display. Instead hes just another half-back that cares more about his own belly then sharing a wishbone.

And by refusing to disipline Ezekial for an act that is clearly a violation of NFL bi-laws, Goodell is telling  players that its ok to break rules if its for a cause that they deem just. Civil disobedence is still disobedence last time I checked. They called it the “Civil” War too, but still a bunch of people died and perhaps even worse- confused millions more about wether or not the confederate flag was racist. Just because something is a charity dosent mean its good. What if Ezekial Elliot wanted to do a sponsorship for “The Second Mile” once he crossed 1760 yds in a season? The NFLs my cause my cleats week was last week, and its time for the league to get back to thinking more about parity and less about charity. 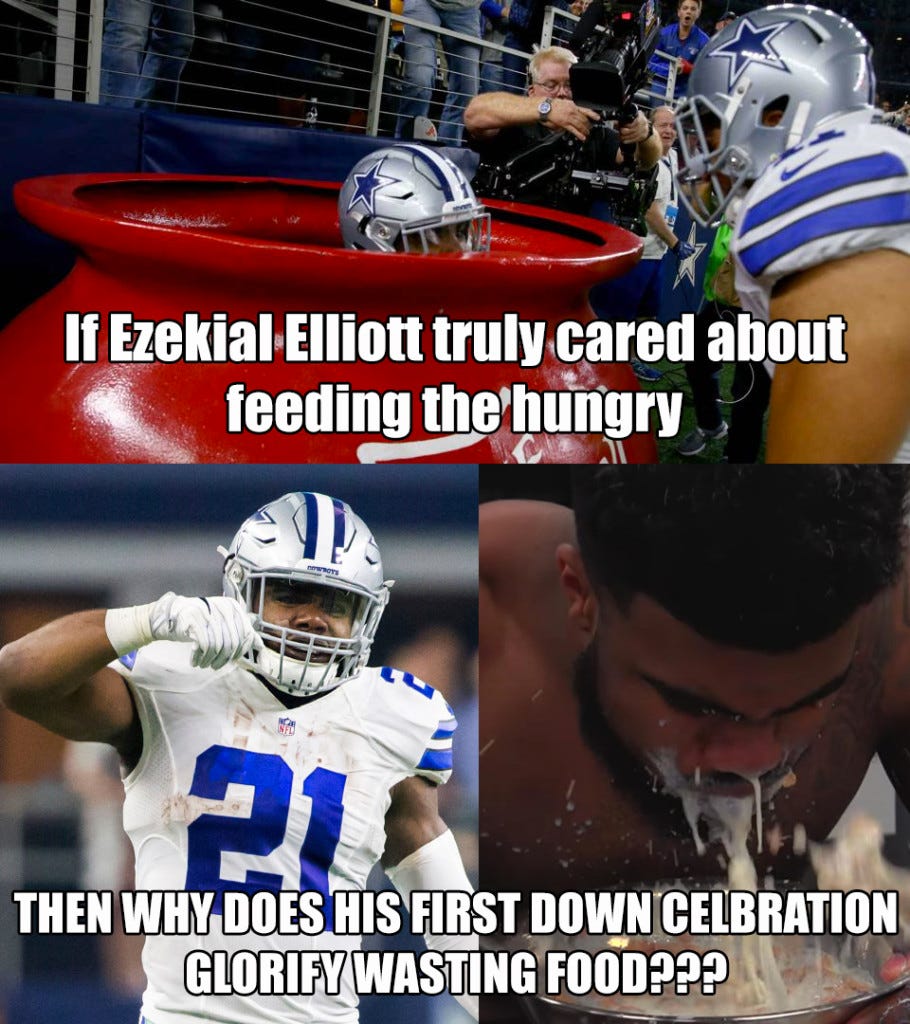 Road Grader of the Week: Joe Thomas of the Green Bay Packers

If global warming is real then how come it was literaly cold in Chicago yesterday? I call Ka-Deem Carey “Unexcused absence” because he just got a full letter knocked off. 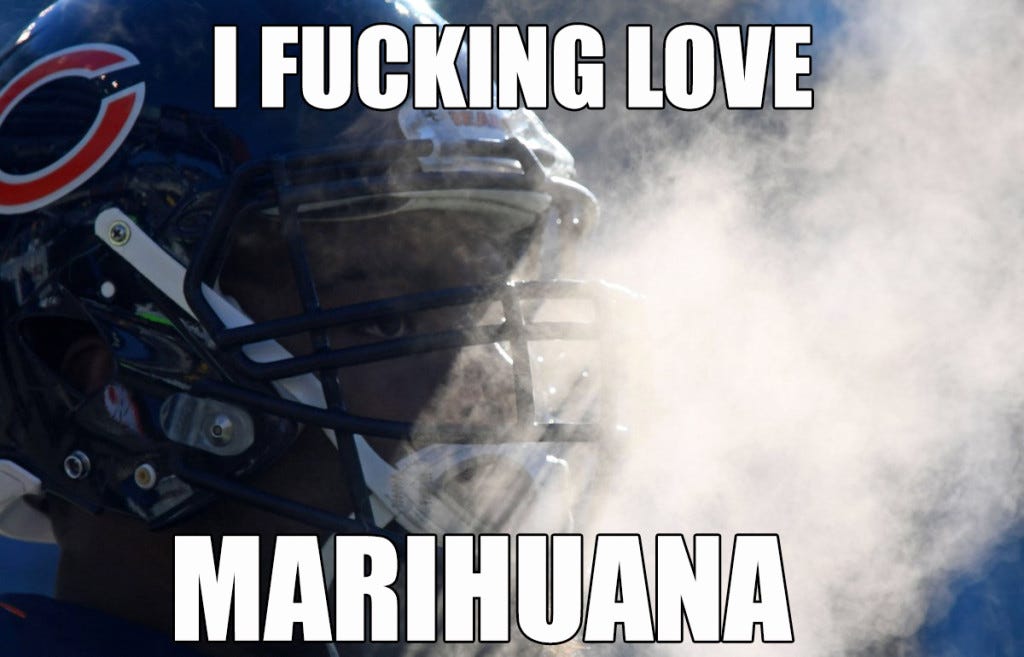 2. Stay woke on Mike Tomlin wearing sunglasses in cloudy weather yesterday. Could mean hes hungover or possbly blind from to much masturbation. One things for sure is that boy, the Steelers and the Bengals, they sure dont like each other very much folks. The game faetured a bunch of fights, Jeremy Hill trying to tear up the terrble towel, David DeCastro and Vontaze Burfict playing a game of “lets pretend we’re those dinosaurs with the big skull type helmets fighting for mating territory.” This is all shaping up for a wild week 16 matchup between the Steelers and the Ravens where, once and for all we might find out if Joe Flacco is Elite.

3. Suprise Suprise Tom Brady wins a game being played in the stadium with the lowest air pressure in the league. And woudnt you know it the Pats are cheating again, this time by playing zone:

4. Is Carson Wentz a bust? I think its time to start asking the question. In a battle of the birds Wentz had his wings clipped a few times and caught a case of turnoverburculosis as Joe Flacco got another feather in his cap. Ironic that Carson Wentz is a bird because if he reads what there saying about him he’s going to want to crap all over newspapers.

5. Mark Ingraham staged a sideline conniption fit after being taken out of the game when the Saints were at the 1-yard line and he got confused by a bunch of fake news that said he was going to get $100,000 escalator in his contract if he scored another TD. Turns out thats not true but for my argument here lets pretend that it is. His behavior Stands in stark contrast to Christian McCafferey who voluntarly is sitting out the Sun Bowl so that some of his teamates can get more national exposure and maybe earn a little bit of NFL money for there families. A superstar taking themselves out of the game is like a General stepping up to the front lines of a battle. And its literaly braver for him to sit out then it is to play.

You remember at the end of Rudy when the whole team put there jerseys on coach’s desk? Thats bascially the same thing. A small scrappy undersized kid born with nothing but incredble genetics and rich parents & unlimited football resources was able to scratch and claw his way to be the starting running back at Stanford, and now hes letting some unheralded teamate named Barry Sanders Jr steal the spotlight out of the goodness of his own heart.

Alternatieley Christian could play but just resolve to not get tackled by any UNC playersor at the very least, hit them better then they hit you. Its called putting a hat on a hat and when your going up against a guy whose literally named Fedora that kind of changes the math.

6. From my warm, slippery hands

7. Little sabermetrics for you here- Tom Savage attended as many colleges as inches shorter he is than Brock Osweiler. Tom Savage is so good at QB because of all the different life experences he’s gleaned in his studies. The guy spent time in college in New Jersey, Arizona, and Pittsburgh for university which really gave him a sense of what to expect in the real world where life is kind of misreble. All these other guys go to school in places like Los Angeles, Austin, or Tallahassee and when they get out there wondering where is their supermodel girlfriend, margarita, and accomodating police department. Not Tom- he wisely chose to give himself a dose of the real world before he was actually in it. All that prepared him to step in for his megabucks starting QB once the going got tough.

8. Cam Newtons immaturty, flightiness, and lack of commitment that we saw in his college days are back again. Seems like this guy cant go two days without changing his damn mind about something and folks thats not how you want a leader to lead. Does he want to be a running back or a QB? Does he want to win a MVP or the Superbowl? Theres a very interesting poll being run on ESPN980 out of DC ahead of tonights matchup between the R-words and the Panthers. it asks which QB youd rather have starting for your franchise- Kirk Cousins or Cam Newton but dosen’t mention if the poll is talking about marrying your daughter or winning a football game so its sciencificcaly unreliable.

9. I’m not sure why the Jaguars thought it was time to fire Gus Bradley before they got on a plane, leaving a man without a job just inches away from a cockpit door and a unarmed pilot. Bradley could of Germanwingsd that plane into the Golf of Mexico and completely screwed up the NFLs week 17 divisional scheduling with playoff births on the line. There needs to be better fired coach protocol to avoid a potential bracket-busting disaster.

So was it a good choice or bad choice to fire Gus? Well lets look at the stat sheets:

So in other words, Gus Bradley could win his division until 2025 and lose every playoff game he played in and still have fewer playoff losses then Belichick.

Kind of ironic because by playing in the house that Peyton built, Luck is literally The Man In The HGH Castle.