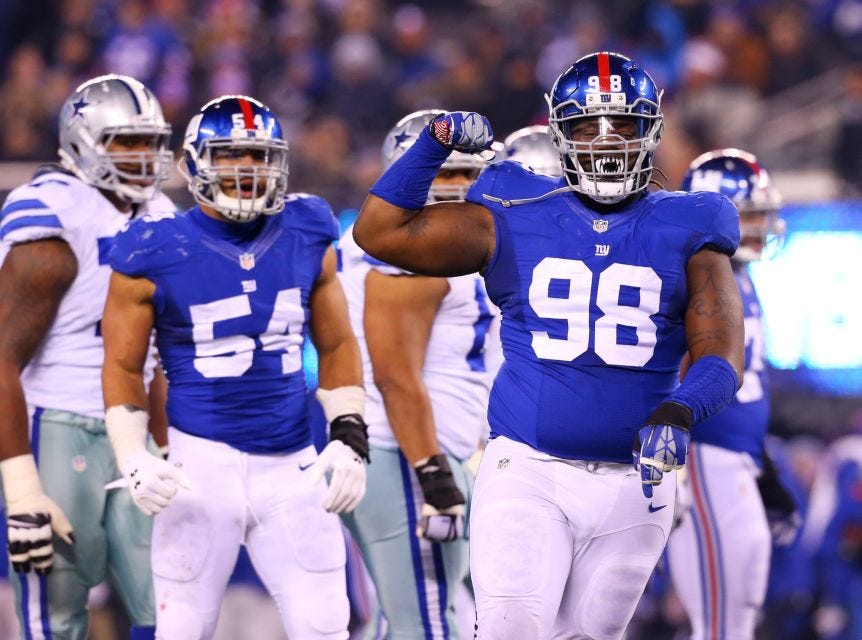 After a prime time showcase of what they’re capable of against a team that had won 11 straight, the Giants defense gets another opportunity to carry the load & solidify a spot in the playoffs. The Detroit Lions have been streaking themselves, but there’s a lot that falls in the home team’s favor as they close out their regular season slate at MetLife.

The Lions run to the top of the NFC North hasn’t been all that pretty. During their 5-game win streak, they trailed at home against both the Bears & Jags in the 4th quarter before scraping by. Still, Stafford’s been able to get the job done late during his best season since 2011’s 41-TD campaign. He’s had at least 15 giveaways in every full season he’s played – but brings just 8 into his 14th game of 2016. Two came last week though in a game where he obliterated tendons & ligaments in the middle finger of his throwing hand.

That injury is a pretty big deal despite Stafford always being a lock to play today. Detroit can’t run the ball & will be without their biggest backfield threat in Theo Riddick. If healthy, Riddick would be a huge safety valve for his QB as he’s a virtual lock for 5+ catches. Stafford will have to move the ball downfield instead. Plus he hasn’t played an outdoor game in over two months. With rain expected, Stafford not only has a defense looking to pitch a shutout to deal with but has every other variable working against him in a bid to lock up their division.

Big Balls Benny with the good hair still needs some contributions from his offense though. Eli’s got yet another shot against a soft pass defense to revive his season. The Lions allow a league-high 73% completion percentage & have totaled just 22 sacks. With Pugh returning, the line should be stronger in front of him to pick apart a mediocre-at-best secondary outside of Darius Slay. He’s a gambler – there’s gonna be at least one big play coming out of his matchup with Odell. I know who I got my money on…

Obviously this is a big game for the G-Men. Not only are they looking to RSVP for the postseason but if you look at potential wild card matchups, give me Detroit all day. The Lions have Dallas & GB left after today so there’s a real good chance they’ll fall to that 4th spot. I’d rather the Giants travel there instead of ATL or SEA. And even though they’re in a good position right now, a loss puts a TON of pressure on Big Blue. Hostile fans in Philly & D.C. would love nothing more than to see their squads play spoiler against a division rival.

I’m still waiting on that “perfect” game where both the offense & defense click together. No better time to do it than their home finale. Call me crazy but I think today’s gonna be a blowout. Eli’s gonna post his best game in two months while Jackrabbit, Vernon, Collins & Co. put the clamps on Stafford. 27-10 cakewalk. Book it.