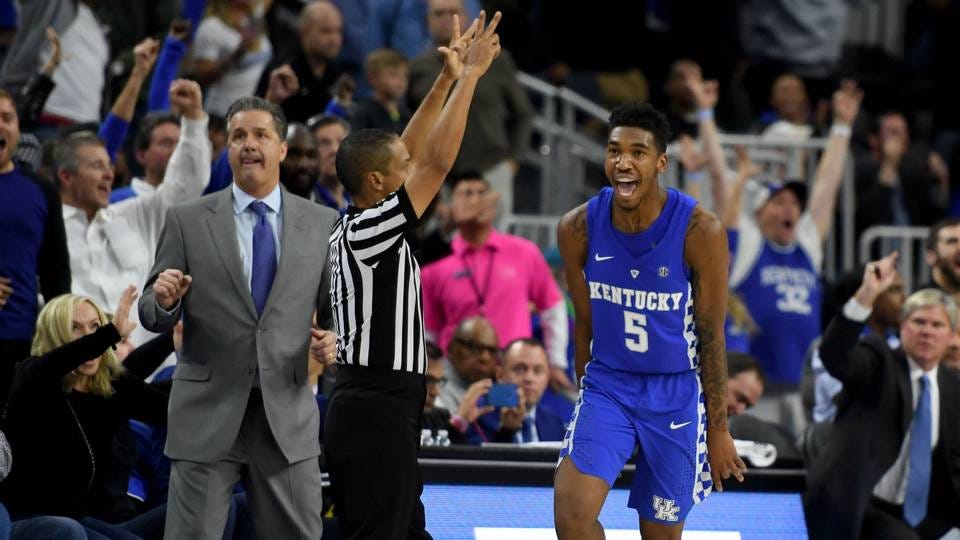 Yeah, so that was an awesome day of hoops. We got what was probably the best-played game of the season in UNC and Kentucky while the Crossroads Classic had two strong games. Throw in a furious Texas A&M comeback to make the game vs Arizona entertaining and Syracuse wearing the best jerseys they’ve worn in years and there was no need to get off the couch or leave the bar. Here are my reactions from those games, let me know yours @barstoolreags

– We need more games played at the pace of that UNC/UK one. There was an awesome flow to the game and the only people bitching about the scoring are those who hold grudges against one-and-done type players. The officials let the game happen for the most part, but still had some weak intentional foul calls and the double-foul against Meeks and Bam was absurd. Just call the first foul, it’s really not that hard.

– Malik Monk, as Kmarko elegantly put it, is a god. That was one of the best individual performances I’ve ever seen out of a Kentucky player as he didn’t force anything – which is the most shocking part. Coming out of high school people questioned his shot selection, despite being on fire I can only count two times he took a bad shot. He’s obviously not going to shoot like that all season, but when he’s playing well it shows how open the floor can be for Kentucky’s offense.

– Derek Willis can’t play in games like that. He’s been awful this year and struggled bad yesterday. He’s a complete liability on defense and Cal should start giving some of those minutes to SKJ or Mulder. If Willis isn’t shooting 40%+ from 3, he’s not worth playing.

–  Joel Berry is making a serious case for most important player. Carolina is night and day without Berry on the floor. We saw them struggle against Davidson and Tennessee at home. With Berry they dominated the Maui Invitational.

– Kentucky needed that win badly in order to stay alive for a No. 1 seed. With the SEC being trash, Kentucky only has so many opportunities for great wins. This was one of them along with Louisville and Kansas.

– Does Notre Dame know there are two halves to a game? This is the second game in a row against a marquee opponent that the Irish gave up a first half lead and got completely dominated in the second half. You can’t blow a 14-point lead to Purdue on a neutral court.

– Notre Dame did solidify the way to beat Purdue if you’re a smaller team. You make Isaac Haas decide whether to stay in the lane or try to defend the three. They torched Purdue in the first half with a man trailing at the 3-point line or putting their ‘big’ in the corner for open looks.

– Purdue can go small as we saw in the second half when they benched Haas and played Swanigan at center. Expect to see more of that going forward, especially if Haas is struggling on the offensive side of the ball.

– I assumed with Anunoby back that Kelan Martin would struggle. That was the exact opposite of what happened. Martin had 28 points and looked like the best player on the floor.

– This was another big win for the Big East, which is the second best conference in America if you ask me. Their top teams – Nova, Butler, Xavier, Creighton, Seton Hall, can compete with anyone in the country. Find out what channel Fox Sports 1 is for you, because conference play is going to be all sorts of fun.

– Indiana continues to rely on the three, which is why they have the ability to run UNC out of the gym or lose to Ft. Wayne. They don’t force turnovers and they turn the ball over a ton. These games are going to happen for Indiana. If you’re a Hoosiers fan, you just hope this doesn’t happen during the first weekend of the NCAA Tournament.

– A name you need to know if John Collins from Wake Forest. He’s averaging over 17 and 10 this season and looked the part of the star for Wake against Xavier. He missed 5 bunnies, which ultimately cost Wake the game, but for a rebuilding project down there at Wake, Danny Manning has something with him and Bryant Crawford.

– Syracuse, can we go in the trust tree for a second? You guys just aren’t good. There’s a lot going wrong – the 2-3 zone is borderline trash this season, you can’t rebound and Frank Howard struggles against decent teams. For a team that people thought would contend in the ACC and be a top-4 seed in the NCAA Tournament, they need a helluva ACC season just to get in the NCAA Tournament. Syracuse won’t have a decent nonconference win and only get Duke, UNC and Virginia each once. The Orange are in serious trouble.