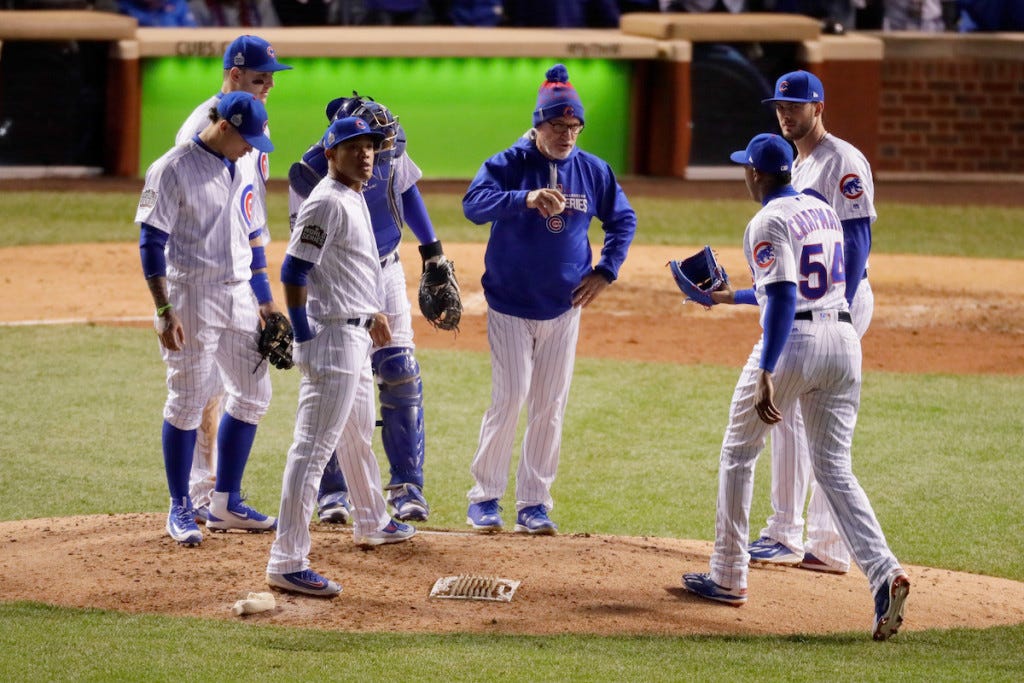 People bug out when I say that I can see an issue from both sides, like “PICK A SIDE DOOD. THERE GOES CARRABIS SITTIN ON THE FENCE AGAIN.” Relax. Sometimes you can see both sides, and this is one of them.

Aroldis Chapman didn’t mention which outings he was referring to, but I’m sure we can put two and two together here. First point I want to make is that Joe Maddon was definitely influenced by Terry Francona’s use of Andrew Miller, yes? We can all agree on that? Prior to meeting up with the Indians in the World Series, Chapman appeared in 28 regular season games for the Cubs and was used for more than an inning twice.

He pitched two innings once and went an inning and a third the other time for a four-out save. Come postseason time, he was used more than one inning prior to the World Series just once, Game 6 of the NLCS, which was the clinching game that the Cubs won 5-0, so that’s somewhat justifiable when you’re trying to get to your first World Series since 1945.

In the World Series, the Cubs fell behind three games to one, and Chapman let his nuts hang in a do-or-die Game 5, getting an 8-out save to push the series to a sixth game. I’ve got no problem at all with using Chapman for eight outs in that game. But his use of Chapman in Game 6 was borderline idiotic, and that’s not even a hindsight’s 20/20 thing.

Luckily for Maddon, the Cubs were able to pull out the victory in Game 7 to win the World Series, but if that Rajai Davis home run to tie the game in the eighth was the spark that led to the Cubs’ demise, Maddon’s head would’ve been on a stick for his use of Chapman in Game 6 — an inning and a third in a blowout 9-3 victory for Chicago. I’d imagine that after throwing an unprecedented 42 pitches in Game 5 that Chapman could’ve used a breather in Game 6, especially given what the score was. He threw 20 pitches in Game 6, and then another 35 in Game 7.

If you’re Chapman, you’ve gotta figure that you would’ve had a better performance in Game 7 had you not been used in Game 6, right? I mean, it’s Rajai Davis. Dude hit 12 home runs in 2016, and that was his career high by four home runs. He’d never hit more than 8 in his entire life.

Now, here’s the other side of the argument — the Cubs gave up a ton to get Chapman in Chicago, and they knew he was a rental. They knew what his price tag would be in free agency, so I have no problem with running that dude into the ground in exchange for a World Series title, as long as you’re smart about doing it. His use in Game 6 made absolutely no sense, and almost cost them the World Series. If Game 6 were a tight game, you’ve gotta use Chapman there. He was their best bullpen arm by a pretty wide margin, so you roll with your best in that scenario. But they didn’t have to, and they most definitely got away with one there.

I think the most interesting part about all of this is that Chapman is the direct source. Usually this stuff is all speculative, or it comes from a “source close to Player X” type deal. I’m sure Maddon will have something to say about it once he gets in the same room as some media members. Or, maybe he won’t. They won the World Series, and I’m sure that’s all he cares about. That, and Chapman is no longer his player, so it’d be wise for him to just brush it off and move on.