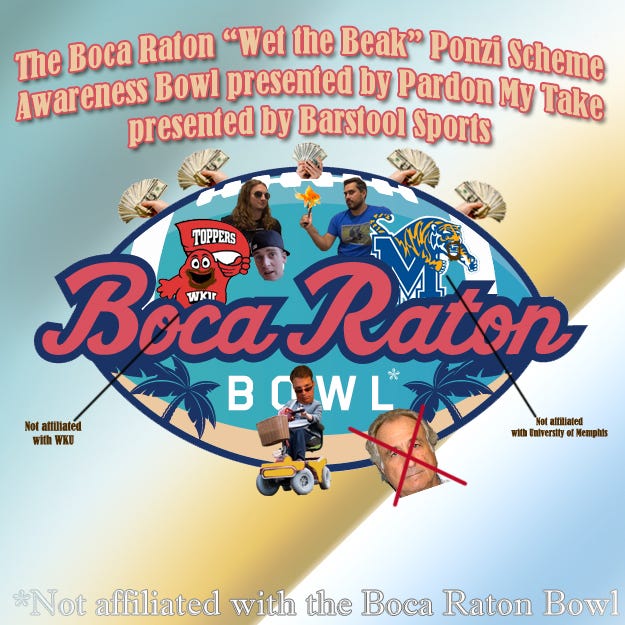 In case youve been living under a rock that dosen’t have the internet, Pardon My Take has heroically and troop-ishly stepped in and bravely agreed to sponsor-cuck the Boca Raton bowl by forcing our way into its naming rights without there permission.

For all you who thought we were going to half-ass this like we half-assed cult week and airport revews by not doing them, well your wrong. We’ve designed a sweet logo, we are getting the finishing touches put on our trophy today, and we are filming a hype video for Monday. Not to mention the act that we are planning wall-to-wall coverage for the game on Tuesday.

This game is going to be explosive. The over/under is at 79 points which means that it is going to be a points factory with more incompetent defense then Manitowac county Wisconsin, and we will have Caleb Pressley on-site giving you all the excitement live from Sunny Boca Raton and interviewing the elderly about how much money they could realistically afford to pay a month for piece of mind that they aren’t in a ponzi scheme. Also, we will be annoucning a very exciting opportunity for you to get educated about the dangers of Ponzi schemes for a low low one-time installment where you will learn how to educate other people about the dangers of ponzi schemes and make some cash while you’re at it! Win-win!