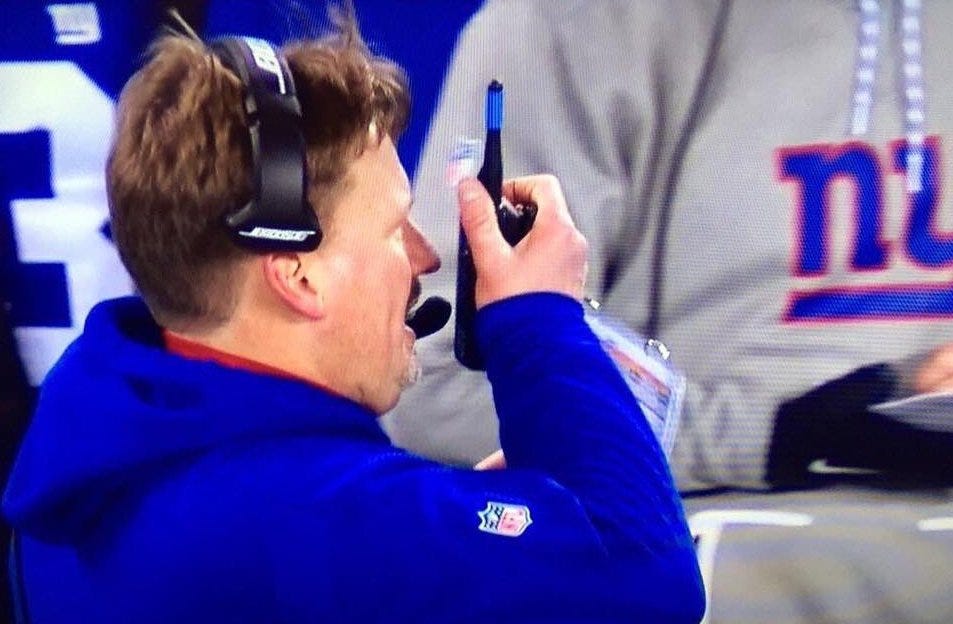 “Hey Jerry, why don’t you investigate my butt? Over. Chhhh (Walkie talkie sound)”

ESPN- The NFL is investigating the New York Giants’ use of a handheld, two-way radio in the fourth quarter of Sunday night’s 10-7 victory over the Dallas Cowboys, a source told ESPN’s Todd Archer, confirming a report by the New York Post. Coach Ben McAdoo was seen using a walkie-talkie to relay plays to quarterback Eli Manning when the Giants were having problems with their headsets early in the fourth quarter. Coaches are not allowed to hold any two-way radios during a game. Another source told ESPN the Cowboys have not filed a formal complaint with the league, but that the NFL had already begun its own investigation of the Giants’ use of handheld, two-way radios.

Desperation is a stinky cologne, Jerruh! The fact that the Cowboys have now resorted to the level of the Deflategate conspirators in order to try to slow down the Giants train going 1 million miles per hour is downright depressing. Dallas has only lost two games this season, probably has the NFC East locked up, and will likely take home their fair share of trophies once the Player Awards roll around. But the Cowboys know full well that their entire dream season could vanish in an instant as Benny and Eli drag their big balls all over Cowboys Stadium. Hell, I’m scared for them. Nothing worse than having one of your rivals blow up your best chance for a Lombardi trophy. So of course they went to the principals office and complained about the big bully. Benny Mac had them figured out Week 1 and he had them figured out in Week 14. I bet he just turned on the walkie talkie to fuck with Jason Garrett’s weak mind. Benny Mac was probably playing army or some shit. Launching imaginary offensives against the commies all while tap dancing in Jerry Jones’ brain. Next level coaching.