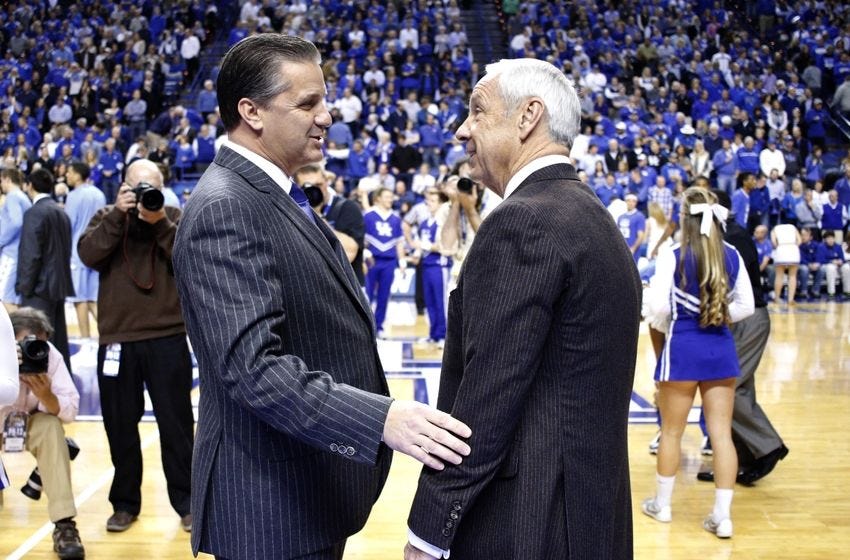 It’s been a long week of shit games. We’re finally rewarded with one of the better matchups of the season thanks for the CBS Classic. Kentucky and North Carolina square off in Las Vegas (after Ohio State/UCLA) Saturday around 6pm.

The first and really only thing that matters in this game is the health of Joel Berry. He’s missed the last two games with an ankle injury and it’s shown how value he is to the Tar Heels. He’s a top-10 point guard in the country, but more importantly knows how to run the Roy Williams offense. That offense is tricky because it’s predicated strictly on when to push tempo and when to slow down and play through the paint. That’s something Roy lets his point guard decide – until he decides to step in, usually with a late game timeout. On top of that Berry is an excellent defender, giving up just .58 points per possession in the 93 possessions he’s been the lone defender. If he can’t go, can only play limited minutes or looks hobbled, De’Aaron Fox will have a field day. If that’s enough for you, Berry is a much better ball-handler than Britt, Williams or White – who would have to beat that Kentucky press. Fox might be the best on-ball defender in the country, which means if it’s a backup point guard trying to bring the ball up against him, there will be a million turnovers.

A lot of people expect this game to be up and down with a ton of transition. That’s something that will greatly benefit Kentucky. UNC grades as ‘below average’ in transition offense, which they run 18% of the time. Now, defensively the Tar Heels grade out as ‘good’, but you want Kentucky to play a halfcourt game. UNC should try to slow this game down, look to push when they can, but really they want to make Kentucky work at a slower tempo.

Defensively if I’m UNC here’s how I’m matching up. I’m running a good amount of zone (UNC has only run zone 36 possessions this year) with the shade on Malik Monk. Run a 2-3 or 3-2, put Jackson and Britt on the wings and let them shade up on whatever side Monk is on. If UNC stays man, I think you have to put Berry on Fox (unless the ankle doesn’t let him), Britt on Monk and Jackson on Briscoe and switch any screen or dribble handoff. The reason for Jackson on Briscoe is you let Jackson sag off of him, using his length to play more inside and dare Briscoe to beat you from the outside.

North Carolina might outrebound Kentucky by 20 this game. It’s the first time since Calipari took over in Lexington that Kentucky has struggled rebounding the ball. The Wildcats rank 237th in the country in defensive rebounding, though they are 10th offensively. The way North Carolina dominates the glass, can lead to a handful of second chance points. Because of this, UNC should fire up more 3’s, especially with Berry in the game. Let your big guys dominate the glass and take advantage of getting the free point from three. Hell, Berry can also shoot the shit out of the ball.

Calipari has suggested playing four guards with Mychal Mulder running the four essentially. I’m sure he watched the national title game against Villanova to get this idea by running the 4-out, 1-in offense that Nova ran with Ochefu. Mulder does provide more shooting, which could in theory stretch the Carolina defense and let Bam to go to work one-on-one against Meeks in the post, or leave the lane open for Fox/Briscoe to drive. I think Calipari is mostly bluffing with this, but you’ll see this lineup happen for a couple minutes if the Wildcats trail/struggle at some point.

Pick: Since lines aren’t out yet, we’ll use KenPom, which gives UK -1. With Berry not expected to be 100% healthy, I like Kentucky here. The lack of that elite point guard is what Kentucky thrives on defensively and the key to stopping UK on the other side of the ball is slowing De’Aaron Fox from getting into the lane and creating havoc. If Berry was healthy right now I’d like UNC to win this game. Look for either Monk or Briscoe to take advantage of a mismatch and get into the lane against Britt. Whoever can control the tempo of this game (expected to be in the 80s) will ultimately win. UNC should want to play this in the low 70s, while Kentucky will want this to get up to the 80s.

The Crossroads Classic is another beautiful thing in college hoops that I wish more states did (looking at you Ohio with OSU, Cincinnati, Dayton and Xavier). The four major teams in Indiana meet in Indianapolis for a rotating matchup each year. We saw this game earlier this year, we just didn’t realize it at the time. I’m talking about the Villanova/Purdue game, since those Irish are similar to Nova in the style of play. What hurt Purdue in that game was the ability to put Eric Paschall in the corner for threes while Isaac Haas had to decide whether to challenge the shot and leave the paint open or stay in the paint. Notre Dame will do that all day. It’s teams like this that can give Purdue problems – not the bigger teams.

Pick: Notre Dame is +3 on KenPom and I like them to win the game outright. We saw they are capable of playing with anyone in the country and I haven’t been as high on Purdue as others. This game being neutral court means there will likely be a tad more Notre Dame fans as well. Notre Dame takes care of the ball and if they come out shooting well, Purdue will be in trouble from the start. Notre Dame by 4.

The second game of the Crossroads Classic means we get another star back in college basketball. OG Anunoby is expected to play for Indiana after missing some time after injuring himself dunking. That means Indiana becomes dangerous defensively again as Anunoby can defend multiple positions and lets Crean get creative with his schemes. Indiana still is too careless with the ball, with the 314th worst turnover percentage in the country.

Pick: Give me Indiana by 7 with Anunoby on the floor. He’s going to create hell for Butler’s Kelan Martin and throw in a Robert Johnson to guard Lewis or Baldwin and it’s even tougher. The way Indiana shoots the ball, they can make up for that turnover percentage.