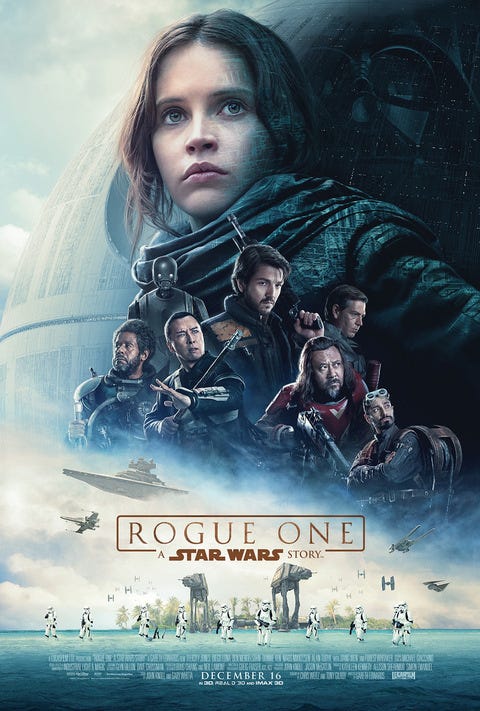 And the answer is a resounding yes. As I have said with each trailer’s release, I thought this was going to be a grittier version of Star Wars. Not gritty in the sense of white running backs or Skyline chili. But a Star Wars movie with a lot more ground fighting, slow transitions, and character development that we wouldn’t care about. The rumors of re-editing and re-shoots only further made me worry about this. And to be honest, so did the first 20 minutes or so of the movie. While I wouldn’t say it was good or bad, it just wasn’t anything memorable or Star Warsy, if that makes sense.

But the movie improves the whole way through except for maybe a slight lull in the middle. Rogue One didn’t feel like an event when it first started. But by the end, it felt like you are watching another great movie set in the Star Wars universe even if it isn’t one of THE Star Wars movies. The humor in the movie is real and not corny. While I thought Disney would do their best to fuck up a beloved franchise, I have to tip my cap to them. They are 2-for-2 thus far and have given me nothing but hope for the future of the entire franchise.

Also I didn’t realize the movie I was going to was in 3D, but it was actually really good in 3D and I’m not a huge 3D fan or anything. So if you are into 3D, I think it’s worth the few extra bucks.

And that’s the end of our review. The recap is below but it is full of spoilers.

Again, below are a bunch of spoilers, so stop reading if you don’t want anything spoiled for you.

I’m gonna give everybody one last warning…

Okay so that was the quick review letting everyone know that this was a good, fun movie. Now lets talk specifics with some quick hitters.

– I love that they opened the with the “A long time ago in a galaxy far, far away…” quote but didn’t do the text crawl. Definitely a good way to differentiate these spinoff type movies from the Star Wars nine (or however many Disney ends up making so they can keep printing money).

– I almost puked when I saw that one of the settings was a trading post. Trading + Star Wars = Bad Phantom Menace memories.

– I barely knew anyone’s name in the movie and I’m not going to remember any of them now after the movie is over. It’s just like Mr. Robot. I have to look at IMDB in order to find out who people are talking about.

– Hey Forest Whitaker, I’m a big guy who hates running as well. But show me a little bit of hustle one time with those robot feet as an entire city blows right into your face. I went in hating Forest Whitaker and his scary ass eye but was ready to love his character because his character was so feared. Turns out he was just a dickhead with an asthma problem.

– LOVED the “I have a bad feeling about this” line showing up but getting shot down before it could be completed. Like the full version is reserved for only the real Star Wars movies along with the text crawl.

– Darth Vader ruled half the goddamn universe yet he spent his off hours chilling in a milk bath on Mordor. What a bitch move by the artist formerly known as Ani the podracer. If I was Darth, I’d have that entire beach planet to myself, even though I was burnt to a crisp and wearing black at the beach is a terrible idea.

– Cassian was a bootleg Oberyn Martell and I won’t hear anything otherwise.

– I don’t know if it’s because I’m old, washed, or never go to the movies because I am an old, washed dad. But I don’t know the first thing about Felicity Jones and I don’t think I will care after the movie. That being said, I obviously fell in love with her by the time the credits rolled.

– K-2SO stole the motherfucking show. The sass of R2-D2 and the wit of C-3PO to go along with the brute strength of Chewbacca. I’ve cared less about real humans dying than I did about K-2SO dying. Damn near started crying. RIP in peace K-2SO

– And the fact that K-2SO was voiced by the pirate from Dodgeball means I am going to have to rewatch it and laugh the entire time by that utterly ridiculous fact.

– Blind Asian Dude was easily my 2nd favorite character. He definitely tried to lift stuff up using the force as a kid like every Star Wars fan ever. Need more blind guys being badass killers just by their other senses in other movies.

– I also like that the blindo had a right hand man with a shit ton of firepower. Asian Gun Guy’s weapon reminded of the Super Soaker with a backpack. Bulky as fuck but just ridiculous power. Almost Death Star level power.

– Moff Tarkin remained a fucking boss even if he was CGI. And I feel like that power struggle with the dude in white was basically every middle manager power struggle in every corporation in America.

– Ahmed from The Night Of was meh as hell. I wish his Star Wars character was sent to Rikers.

– Shout out to all the nostalgia and subtle callback references in the movie. Yavin had the same feel as it did in A New Hope. Kinda retro 70s graphics, dude with the speedometer, the temples, the uniforms and just the overall vibe.

– This was also the case for when people that fired Death Star. Identical uniforms, camera angles, and all that mumbo jumbo. There was a lot of talk (a lot unfairly) about how The Force Awakens was pandering to fans of A New Hope. But Rogue One could literally use that nostalgia to their advantage since a lot of the characters in the movie were actually in A New Hope.

– Seeing Pig Face and Pussy Lips from the Mos Eisley Cantina was great too. They should appear in all these spinoff movies as the Forrest Gump of Star Wars, stumbling upon big moments in history.

– The R2 and 3PO cameo was obviously the bees knees. Love those silly sons of bitches. And again RIP the guy that was in the R2-D2 costume during the original movies. Another great one lost in 2016.

– An entire fleet of ships coming out of hyperspace at the same time does things to me. Very weird things.

– The fact that Rogue One had an actual meaning and was said in the movie was cool. Not sure why I love when that happens so much but I do.

– Shout out to the admiral fish for thinking of the space ship bumper cars to cause the Star Destroyer to destroy the shield generator. Is is racist to say fish people make good admirals?

– Speaking of which, I would have looooved to have seen Admiral Akbar bopping around in the background as a lieutenant or some shit. They may be saving that for a future spinoff movie.

– It seemed like a few big scenes from the trailer were cut from the movie, which was surprising. Especially the Tie Fighter pulling up on Jyn like Arnold in the motherfucking fighter jet from True Lies.

– I think the best part of the movie was Darth Vader just crushing motherfuckers with the force, his lightsaber, and whatever machines make up his body. I could watch an entire spinoff of just Darth in his prime murdering fools. And putting his lightsaber through a guy and the door was cooooooold bloodeddddddd. I need at least a short film of Darth going full Darth on people more than he needs pumped in oxygen.

– The black dude saying he was going to flick that switch and promptly getting blasted to oblivion was LOL funny.

– Everyone in the movie theater geeked out once they realized the plans being passed along was going to end with basically the beginning of A New Hope. And that had to be a CGI of Leia, right? Carrie Fisher did wayyyyy too many drugs in the 70s and 80s to ever have a prayer to look that good with 100 of the best makeup artists in the world working on her around the clock for a month.

– But that ending. Wow. That ending was fucking fantastic. Had the whole theater hyped and kinda has me wanting to fire up A New Hope immediately afterwards. Being able to fill in the backstory plots of the old movies with new movies like this is fucking awesome and exactly how the prequels should have been made. Fuck Jar Jar Binks. After the first 35 minutes or so, I didn’t think I would ever rewatch Rogue One. But after that ending, I may go back and watch it again this weekend.