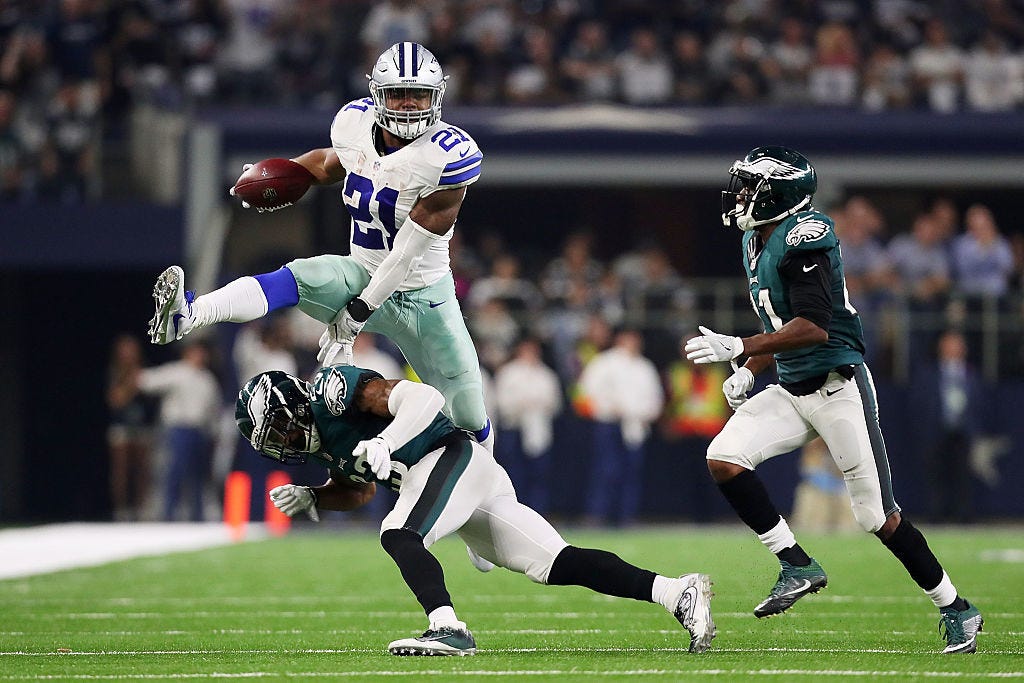 MMQB – The woman told the police she had been dating Elliott for a year and a half, and that they had lived together for three months. According to the police report, she said that the night of his birthday, when she showed up at the after-party, he forcibly yanked her out of her car by her wrist. She told police that the two of them had gotten into several fights over the five previous days, and that he had pushed her, choked her, struck her, dragged her and thrown her around.

Elliott wrote in a police statement that he had “NEVER” dated the woman, that they just had a “sexual relationship,” and that he never assaulted her. One of Elliott’s friends, who had spent most of those five days with Elliott and the woman, later said in an affidavit that he hadn’t seen any abuse. Elliot told police that the woman was upset that he had not taken her home, and that her bruises were from a bar fight she was in that night. Two other officers confirmed that there had been a bar fight earlier, and a friend who accompanied the accuser that night confirmed to the police that the accuser had been in an altercation at a bar. Three witnesses at the after-party told the police that they did not see Elliott assault the accuser. The woman who accompanied the accuser also said in an affidavit that the accuser asked her to lie to the police about Elliott yanking her wrist and pulling her out of the car.

“I’m calling the cops to ruin your career, your career is done,” the woman shouted at Elliott that night, according to one witness’s account to the police. Other witnesses, including the woman’s friend, said in affidavits that they heard something similar.

The police did not arrest Elliott, and the city attorney’s office later declined to bring charges, citing conflicting and inconsistent evidence.

So this situation has hung over the head of the Cowboys’ season like a Sword of Damocles, a team with a reputation for rostering players with checkered history having a stud draft pick come in and change the team only to possibly be another Greg Hardy. It’s something the media hasn’t covered a lot and everyone seems confused about the situation with some assuming he’s guilty and the NFL is holding up the process due to Elliott’s success. But the MMQB, as much as they have to play it close to the vest, did a good job spelling out the issues at play after they got the Ray Rice situation so wrong just a few short years ago:

When the NFL got word of the Elliott incident from the summer, Friel and Roberts began investigating. It was a messy he-said, she-said case to begin with, the kind that often does not result in an arrest or charges. It would be difficult for the NFL to determine the facts of the matter and reach a conclusion.

Then Elliott emerged as the NFL’s leading rusher, and the league fumbled another, separate domestic violence case, and the stakes seemed to get higher. The NFL could not afford to get this investigation wrong, too, not after pledging to be better, and so the Elliott case has dragged on. It’s still going, three and a half months into the season, with no end in sight.

So reading between the lines: The NFL is afraid to get this one wrong even though there’s a preponderance of evidence saying this is a situation where Ezekiel Elliott may not be in the wrong. Are there some facts missing? Are the sources defending Ezekiel Elliott credible? They pretty much have to get it right or else they’re a laughing stock and, worst case scenario, Elliott somehow were guilty and does it to another girl. It sucks that that the investigation has gone on so long but it’s a little reassuring to hear that it’s not some sort of corruption keeping Elliott in the game until the Cowboys’ season ends. It’s a little easier to root for him with a clean conscience.

Here’s hoping Zeke clears his name en route to an offensive rookie of the year award (maybe an MVP?) and a Super Bowl victory, a great triumph for men everywhere given the facts at play. We are all Cowboys fans! *looks around