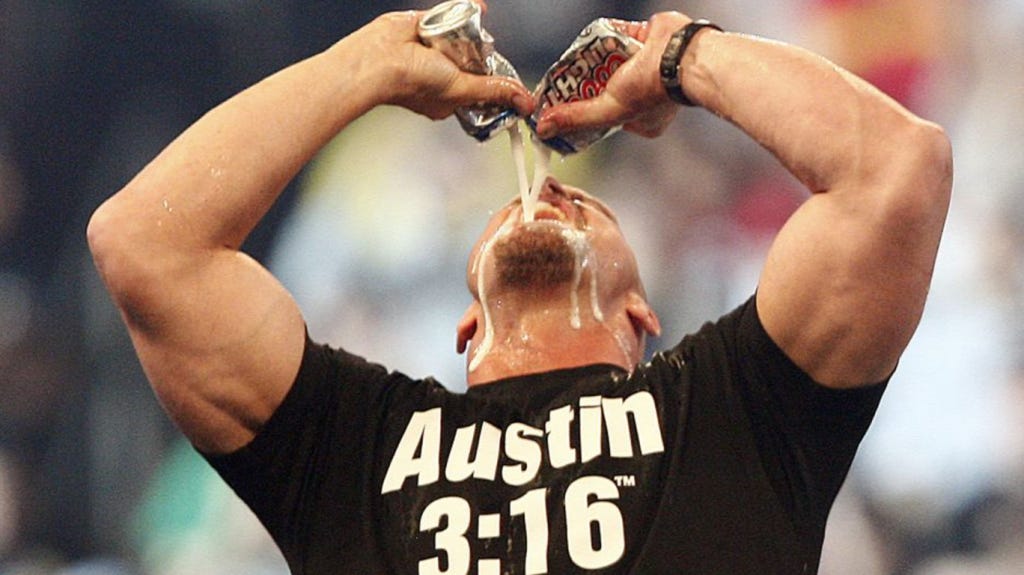 News AU - ON the latest episode of The Steve Austin Show podcast, Stone Cold talks with the guy whose job it was to throw him cans of beer for his signature celebrations. Mark Yeaton worked for WWE for decades as a referee and timekeeper, and it was his responsibility to bring cases of beer to his ringside seat and toss cans in to Stone Cold whenever he signalled for them. During the discussion, Austin says that he often left the ring with a buzz due to how much beer he was drinking.

I love this peek behind the curtain of Stone Cold Steve Austin. Were the beers real? Yep. Was he getting drunk in the ring? Absolutely. And how many can he put down in a night?…..115. 115!!!!

Steve Austin: “Were you in Japan the time we did the beer bash with the Dudleys and Stacy Keibler? …. We went through 115 beers that night [in Japan], and that was the most I ever went through. And a lot of people said, ‘Hey man, was that real beer?’ And I say yes, it was always real beer… except for the one time. We were in Montreal, I think it was Sunday, something like that. Whatever it was, or maybe it was against the rules of the building, but it was NA beer, non-alcohol. And so all of a sudden those pictures start making the rounds and people are thinking, ‘Oh they’re throwing this guy non-alcohol beer.’ … that was one time.
“I can’t tell you how many times I left the ring and I had a little bit of a buzz because of all the beers I was drinking. When you’re shotgunning anywhere from six to 12 beers, and maybe you get half of ‘em in. On an empty stomach, after you’ve wrestled, it goes to your head pretty quick.

Outrageous. Him, the Dudleys, and Stacy Keibler putting down 115 beers in Japan. From what I understand, it happened in the ring, with the timekeeper just continually throwing them beers. I think? Wish there was a picture of the ring after 115 Steveweisers got poured. Either way, 115 beers is awesome. Love me some good Stone Cold stories.