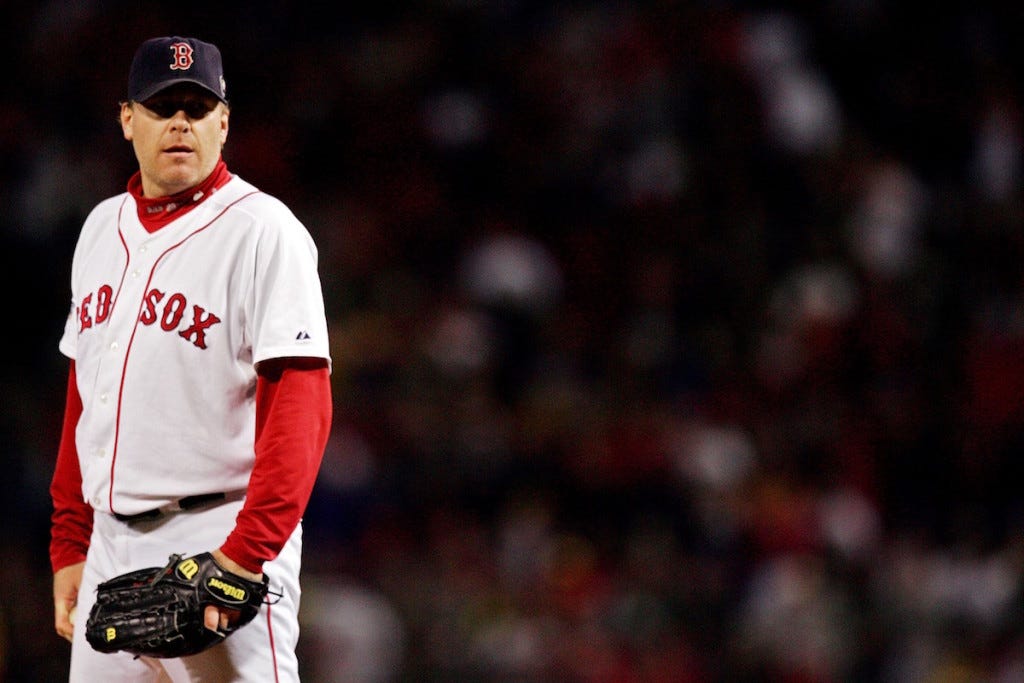 All the steroid guys on the Hall of Fame ballot should be sending Christmas cards and fruit baskets to Curt Schilling’s house this holiday season, and thanking him for using his Twitter account to take all the attention away from their years of steroid use during their playing careers.

A couple of weeks ago, I wrote about how Dan Shaughnessy is choosing to “invoke the character clause” this year as a means to withhold his vote for Schilling on the Hall of Fame ballot. My take was that his stance was horse shit, and that what Schilling tweets as a 50-year-old man has nothing to do with what he accomplished between those white lines during his major league career. If you’re only looking at a player’s major league numbers to determine whether or not they’re Hall of Fame worthy — as in no minor league or post-MLB statistics — then why would what they do character-wise be any different, unless they committed a horrific crime?

Schilling was a Roberto Clemente award winner, and raised significant funds for ALS research during his playing career, which should really be all that matters in regards to the “character clause” for his Hall of Fame case. By the way, that clause was originally created for cheating on the field, and had very little to do with off-field related matters. It’s not a fucking good samaritan clause, although stuffy writers are now using it as such. By the way, I asked Schill what he wanted for his birthday last month, and he said a donation to Fisher House Boston, which is a place where military families can stay so that they can be close to their loved ones, while receive medical treatment. What an asshole to ask for something like that.

Anyways, a New York columnist by the name of Wallace Matthews is one-upping Shaughnessy, and instead of just simply not voting for Schilling, he’s giving up his vote entirely.

If baseball’s Sabremetricians could come up with a way to quantify character, Curt Schilling’s would be a negative number.

But a guy’s personality is not supposed to be the criteria for voting, his performance is. However, voters are human beings and sometimes it is difficult to separate the man from the player.

That is where the question of Curt Schilling’s candidacy comes up for me this year. I have voted for Schilling in the past, based on his superior career WAR (80.7, higher than that of Tom Glavine, Don Sutton, Jim Palmer, Bob Feller, and yes, even Sandy Koufax) and his outstanding post-season numbers.

His personal views have often troubled and at times offended me — he is an unabashed collector of Nazi memorabilia — but I have kept that out of my thought process.

Until, that is, about a month ago, when he retweeted a photo of a man wearing a T-shirt advocating the lynching of journalists, with the comment, “OK, so much awesome here . . .”

Beyond the offensiveness of any reference to lynching, which is profoundly racist in itself, is the threat to the men and women in my profession. That is something I take personally and if Curt Schilling really wants to “lynch” journalists, he can start with me, in a boxing ring with 10-ounce gloves on. That will put an end to his sick little fantasy.

Which brings me to this year’s ballot. I can’t bring myself to vote for a player who advocates — or at least thinks “funny” — a call to violence against me or any of my brethren.

And I can no longer bring myself not to vote for proven cheaters when the person who was supposed to be policing them will soon have a plaque in Cooperstown.

So it seems as if there’s only one solution: I’m giving up my “privilege” of voting for the Hall of Fame.

The Hall, of course, will go on quite nicely without my vote.

And I will be able to sleep soundly without the headache of having to face an “honor” that these days feels more like a curse.

Oh, fuckin’ boo hoo, guy. Yeah, it’s such a daunting task to circle in some bubbles on a piece of paper. Does it suck to play the witch hunt game and try to keep players out who you think took PEDs, but there’s no circumstantial evidence against them, yet, at the same time, it’s fairly obvious they used PEDs? Yeah, I’m sure that can’t be fun. And I actually agree with him that it’s incredibly hypocritical to enshrine Bud Selig in the Hall of Fame, while shaming all the steroid players. But to throw a temper tantrum and give up your Hall of Fame vote because of Selig getting in and Schilling’s tweet is such a crybaby move.

Schilling is a Hall of Famer, who a lot of people view as an asshole. He will not be the first person in the Hall of Fame who fits that description, and he will certainly not be the last.