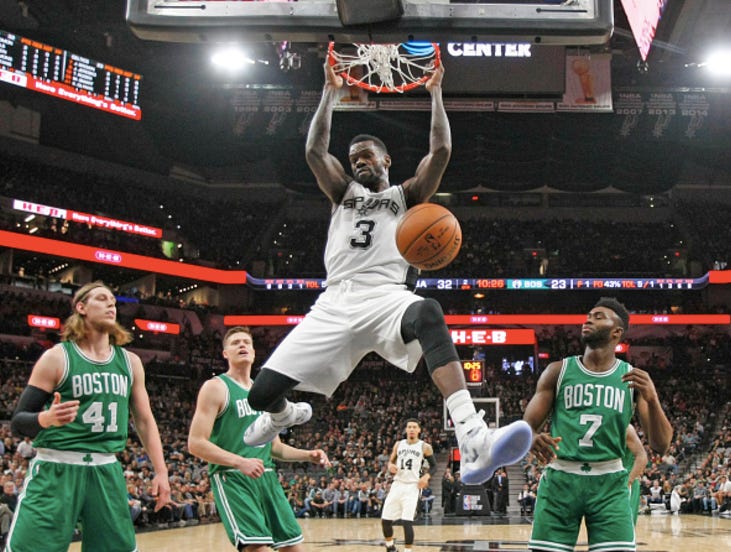 Make it 11 straight. The Celtics haven’t beat the Spurs since March 31, 2011, but it feels like 20 years. After dropping the first meeting 109-103, they faced a equally painful result last night falling 108-101. I’m going to go out on a limb here, but I’d say the Spurs are a slightly better team, in fact, I’d go as far as to say they are way better. Despite that obvious claim, the Celtics did find themselves again in a position to win this game, and with every run, the Spurs had an answer, like good teams do.

I hate that it had to come with three straight losses, but part of me is smiling knowing that there are a whole bunch of people out there that should feel pretty stupid in regards to how good this team is with or without Isaiah. Their claims that we have Smart and Rozier so who really needs Isaiah, the offense works so much better without him! That’s what we heard after that Orlando game. Well, let’s just check the facts over the last three games

How exactly is that better? A lot of the talk I heard was that Isaiah’s offense was overrated, as if his 26/6 wasn’t really that impactful. Does everyone agree yet? Can you all see it? This team needs Isaiah’s offense WAY more than whatever liability he is on defense. Rozier and Smart showed me nothing over the last three games that they are legit options to fill the Isaiah role. Opposing PGs in ALL THREE games had an absolute field day against our guards. I have no idea why this city and some of its fans are so quick trade Isaiah, bring him off the bench, or discredit what he does. It’s a shame it took three straight losses to get this point across, but I think things are fairly clear. This team is in no way better without Isaiah Thomas. The offense does not look better without Isaiah Thomas. This case is closed.

Much like their game in November this one was just as entertaining, and while mostly negative there were some shining moments. Just remember as shitty as you feel and as shitty as they are playing right now, the Celts are still 1 game out of the 3 seed. Things will get better.

– I cannot imagine what this team would look like if it did not have Avery Bradley on it. What a breakout year this has been for the guy. Another double-double in this one (25/10) I’m not sure you realize how crazy this is

Where on earth has this come from? Who knows and who cares because I love everything about it. Obviously Avery knew he had to be the one to step up with Isaiah out, and he continues to do just that. His 25 points came on 10-16 (3-6) shooting and even though those two things are impressive, I was most pleased with his 6 assists. Avery hasn’t passed the ball that well since early November against the Nuggets. Remember this was a guy who was a 34% shooter his rookie year, and could not shoot a three. Now to see his form, and how he scores the basketball, you can’t help but be impressed with the development.

As is tradition Avery filled his role as Mr. First Quarter with 9 points early, and from there he was off. When I think of Avery’s improvement as a scorer, one play of his stands out.

This should give us all hope when we realize that we are going to have to develop players because nobody is going to trade us anything.

– I thought the Celtics started this game offensively the exact way you would want. Marcus was aggressive with an early floater, then Horford hit a jumper, and then Avery followed. They had 6 assists on their first 10 baskets so they were moving the ball, and the threes they did take were for the most part within the flow of the offense. Sure maybe they were down 9 after shooting 50% and turning SA over 5 times, after the first quarter, but it wasn’t because they were taking bad shots.

This rang true again during the third quarter. A nice 26 point effort on 50% shooting they had 6 assists on their 8 baskets and that ball movement was the reason they were even able to climb back into this game in the first place. Well, that and The Theory never lying.

– One would think that with how well he’s been playing, and with the obvious need, that Jaylen was in store for a big night. Well, the good news is he doubled his minutes from their first meeting. The bad news is that means he only played 10 minutes in this game. Jaylen hadn’t played this few minutes since the first game of the month against SAC. In his 10 minutes though, he wasn’t half bad! I thought he played really good defense on Kawhi in his limited opportunities, Kawhi was simply better and made ridiculous contested jumpers. He had that nice steal and breakaway which is what we already knew he could do, but 7 points in 10 minutes is something I can get behind, I just wish he played more.

– At times a little out of control, but Terry Rozier’s development took a step forward as well. Without him in that second quarter, the Celtics are in a much bigger pickle heading into the half. He was a game high +11 in his 24 minutes, so obviously you can see how impactful his time was. He may not have made them all, but I loved that Rozier was really the only guard to was consistently aggressive at attacking the rim. I didn’t love that possession where he dribbled around for forever and then hoisted a corner three, but we’ve seen him start to play with a greater level of confidence offensively, so that’s a positive to take away.

– I did not know Jonas could dunk like that. Sometimes your friends never seize to amaze you.

– Well, where to start. I guess it doesn’t really matter, so let’s begin with how lazy the Celtics passing was. Pathetic really. As Brad said in his interview after the first quarter, they needed to be better about not throwing the ball to the other team. A wild concept, but you know something that you probably shouldn’t do. Not only were they passing it to the Spurs, but they were also passing it to the fans on the sidelines. Every little handoff seemed to be tipped by a Spurs player, Kelly Olynyk damn near turned the ball over after holding it for like 15 seconds, they just didn’t look as sharp as they needed to be to beat a team like this on the road.

– That laziness made its way to the defense, because lord let me tell you that wasn’t much better either. How on earth are you going to beat the fucking Spurs if you allow them to shoot 55% from the field? Guess what, you can’t. It all started in that first quarter where the Spurs hung 32 on 65% shooting and the Celtics never recovered. Now part of this were tough makes by guys like Kawhi, but others were easy ass alley-oops and layups by Tony Parker. Say what you want about the Celtics defense, but teams do not usually shoot that well against them, so to see them have that kind of defensive intensity coming off two days rest was disappointing.

– There were two key stretches in this game for me, both sucked dick. The first, the Celts finally crawl all the way back and take the lead 43-42 with 3:31 left in the second quarter. They then entered halftime down 56-47. Unable to capitalize and go on that one push.

Then, after trimming a 15 point lead to just 1 with 1:06 left in the third quarter, you give up a Pau Gasol corner three to push the lead to four. The Celtics then gave up a 9-0 run to start the fourth and just like that they were down by double digits again. Another opportunity wasted.

– And I’m sorry, but when Tony Parker has the best performance he’s had in like a month, I am pointing the finger at my two supposed defensive minded point guards. This now marked the third straight PG to kill them. Lowry had 34, Westbrook 37, and while Parker just had 16, 10 of them came in the fourth quarter to essentially ice it. Rozier was getting absolutely roasted, allowing Parker to get to the rim whenever he wanted. It was almost as if nobody had seen any tape of Parker of the last decade to realize he has a really really good floater.

– Really needed something better than 14-36 from Smart/Jae/Horford if we’re being honest.

– It fucking happened again. David Lee is going to haunt my dreams for perhaps all of eternity. His 8 points and 10 rebounds were maybe the most frustrating thing I’ve ever watched, and no play was bigger than his tap out offensive rebound with like 1:30 left in the game. It is absolutely inexcusable to basically allow David Lee to beat you twice in one season. It isn’t even acceptable to allow that to happen once. It’s not the Celtics fault David Lee showed up out of shape I’m not sure why he has to have these revenge games against us.

– You are lucky League Pass isn’t updated at the time of me blogging this because I cannot show you the absolutely HORRIFIC 2on1 in the third quarter that quite honestly might have set basketball back a few generations. I don’t even want to talk about it anymore, you know which one I mean. So embarrassing.

While this loss might have been expected, it still sucks all the same. I can’t be too upset because obviously not having a full roster didn’t help, but neither did they. At the end of the day this was a winnable game that the Celtics just couldn’t pull out because when things got tight, Kawhi scored and we missed threes. Big picture this doesn’t really change anything for me, I don’t think any of us think the Celtics are on the level SA is at, so really Friday’s game is the one to focus on. Isaiah is set to come back, and CHA is a much more relevant opponent based on how things are going to shake out in the East. They lost last night too, and like I mentioned at the top of this blog, the East is still VERY much wide open from the 2 seed down, and despite all the injuries the Celtics are right there.

Get this team healthy and let them play together for a considerable stretch of time, is that so hard to ask? 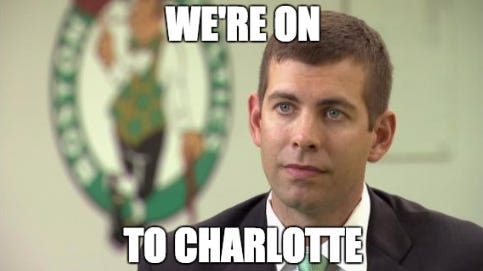