I honestly have no clue how somebody could watch that absolutely showstopping performance and not donate money to the Salvation Army. And I don’t just mean a couple of pennies that were sitting in your middle console like that black pickup probably gave him. That dude earned some actual paper money. He can slip and slide his way without breaking his stride and that bell doesn’t stop chiming. Entertainment at its absolute zenith. Not to mention that he actually helps a woman with her groceries like a cop from the 50s or some shit. If this police offier ever pulled me over for speeding, I’d gladly accept the ticket, shake his hand, and make it my goal to be a better driver. You know why? Because this cop clearly gave up a career in dancing to serve his fellow man. Something to be said for that. Plus he clearly has an impeccable taste in music. That doesn’t hurt either. I don’t know what that giant red Salvation Army pot in Cowboys Stadium resides when it’s not Thanksgiving, but this cop and that pot should go on tour and put world hunger out of business for good. 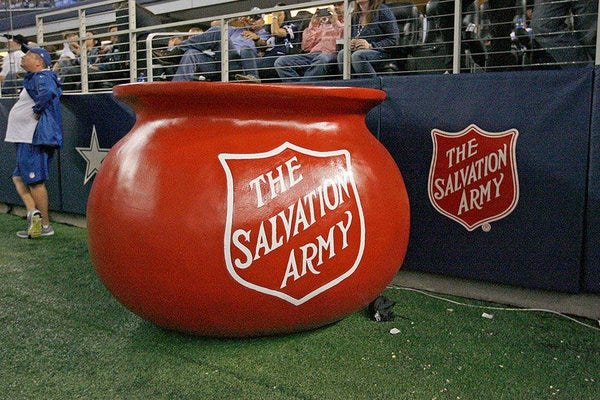