Nothing like starting your Wednesday morning by feeling sexy as fuck while awkwardly smiling at your computer for a full 15 minutes. Sure I should hate the fuck out of James Corden for basically living my dream of being a fat guy that gets paid to hang out with Bruno while singing some of his greatest hits. Should despise him with every fiber of my being. But it’s impossible to get angry at a guy with a personality like Corden. Bubbly as fuck plus the British accent goes a long way. And I know I can shoulder shake better than him. My shoulder dance moves are just as much a reason I’ve ever had sex in my life as anything else.

But back to the real star of the show. I think we are at the point now where even the Bruno Mars haters have come around on Bruno, right? All the guy does is make hit songs, dance like a fucking God, and pull off a full silk outfit with those outrageous hats. Trust me, I never thought I’d ever consider a 4-foot-nothing Hawaiian with curly hair my favorite musician on the planet. But here we are. The word electric factory gets thrown around on this site a lot, but you can’t watch a Bruno Mars performance and not wonder if ConEd is trying to figure out a way to kidnap his tiny ass and use him to power the entire island of Manhattan.

Oh yeah and how disrespectful was Corden asking Bruno if he could do the Elvis lip. That’s literally the first thing they teach you before becoming an Elvis impersonator. 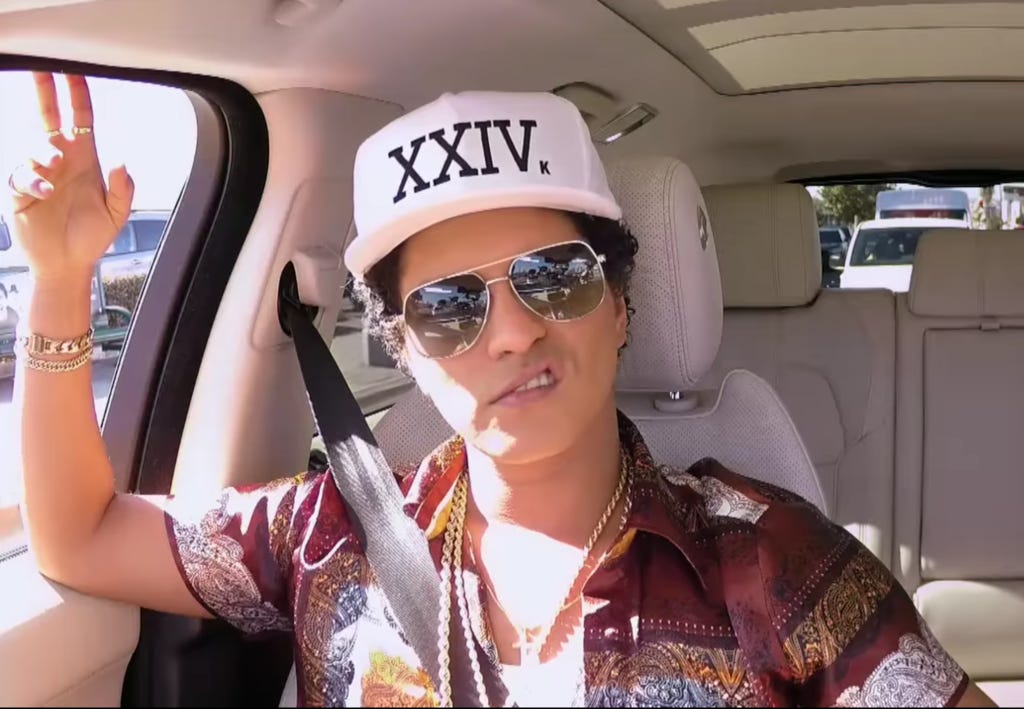 But again Corden saved it with the Fat Elvis line. Damn cheeky Brits charming my pants off.

As for gripes, I only have one. I don’t understand why they didn’t include Chunky in the constant stream of hits. I’m guessing there were enough babies being made at 1 AM last night after Versace On The Floor played and CBS didn’t want to be responsible for a a full blown population boom.

I need a cigarette. Or a shower. Or something.