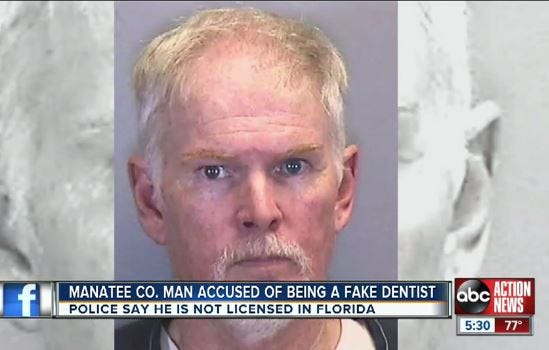 Huffpo - A Florida man was arrested last week for allegedly posing as a dentist and performing dental work from a reclining chair in his living room ? including making dentures and removing teeth, which police say he sometimes did without anesthesia.  Robert “Robbie” Rheinlander, 53, is accused of working for cash from his home and the homes of his patients, according to WFLA, the NBC station in Tampa.

We’ve posted a lot of crazy stories in our time at Barstool but a fake dentist pulling out teeth without Anastasia is right up there.   I mean that is flat crazy town.   Like imagine sitting in his chair and next thing you know he’s just ripping your teeth out?   It’s not only painful, but it’s legit horror movie type stuff.   It could be the plot of a Stephen King movie or something.  Also I’m assuming he had these people strapped into his chair?  I mean how else could he remove 11 teeth on 1 person?   If somebody actually let that happen to themselves they’d be more crazy than the crazy dentist.

PS – Can anybody ever look more like a fake dentist who rips out teeth without anesthesia looks like than this dude? His face screams fake dentist.