I have chosen one of the truly great business leaders of the world, Rex Tillerson, Chairman and CEO of ExxonMobil, to be Secretary of State.

First things first, great name. Rex is just a great name. You follow it with Tillerson and you’ve got yourself a home run. If we’re going solely based on name appeal — which Trump very well may be doing — Rex Tillerson is an excellent choice.

Second things second, this dude’s rich. He’s made over $200 million since taking over as Exxon CEO in 2006, a position he very much earned — he’s been at Exxon for 40 years and started out as a low-level engineer.

Third things third, Tillerson’s BOYS with Putin. He literally received the “Order of Friendship” from Russia in 2013. This all stems from Tillerson doing deals and negotiations with Russian oil giants over access to the oil-rich Arctic. With everything that’s going on with Russia and the election, I’m sure you can derive the connotations surfacing from this relationship. 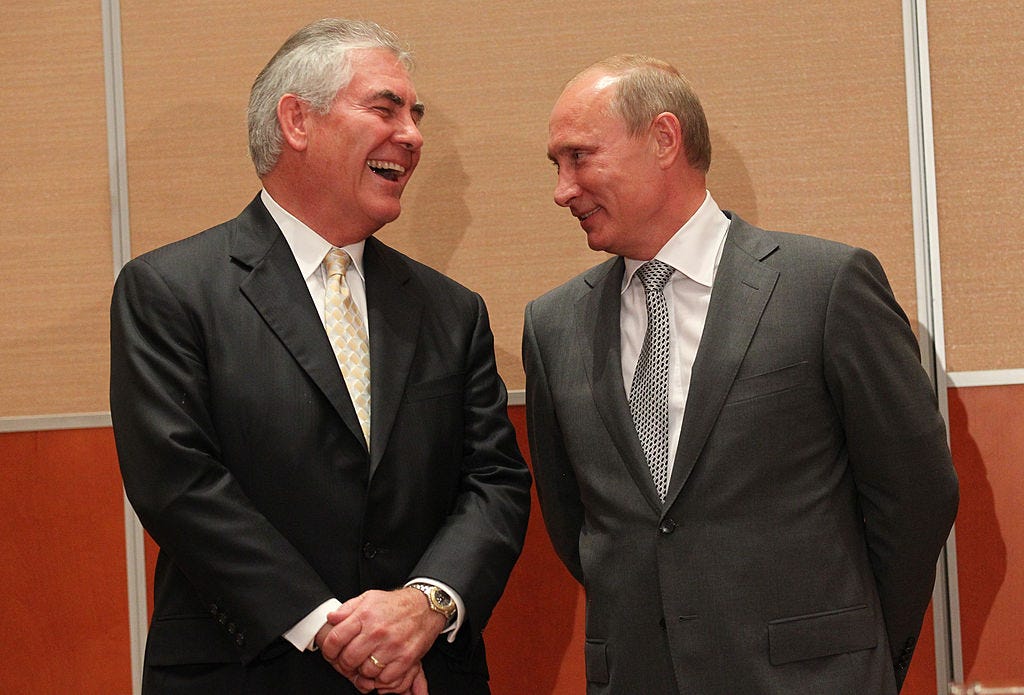 Fourth things fourth, people are not going to like the fact that this guy has zero formal state or foreign policy experience. Yes he’s done all sorts of business deals and when you’re the head of an international giant like Exxon, you’ve dealt with damn near every world leader. But negotiating on behalf of oil is different than negotiating on behalf of the United States of America.

Fifth things fifth, people are not going to like that he reps “big oil.” There’ve long been accusations that America goes to war for oil and having the most important cabinet position be taken by Mr. Big Oil himself will ruffle some feathers. Toss in that sanctions on Russia and their whole Ukraine situation have cost Exxon an estimated $1 billion and you can start to see how any future move to lessen those sanctions — or other moves like it — will be received.

Sixth things sixth, if you’re a “drain the swamp” kinda guy then it’s hard to not like this move. He may be big oil, but he’s not Washington establishment.

Seventh things seventh, Tillerson’s confirmation process is likely to be the most gruesome. Of all the cabinet nominations thus far, Congress is expected to pushback the most over Rex. Trump says as Congressional members meet and get to know Rex, they’ll basically fall right into his dreamy eyes and immediately go home with him. With just over a month until Inauguration, will be interesting to see how that plays out.

Ninth things ninth, Tillerson was recommended to Trump by former Secretaries of State Condoleezza Rice and James Baker, and former Secretary of Defense Robert Gates. Yes those are all Republicans, but their endorsements carry weight as deeply experienced diplomats. And Gates served as Obama’s Secretary of Defense during the first 2 years of his administration, from 2009 until his retirement in 2011.

Gates acknowledged that ExxonMobil is “one of many clients” of RiceHadleyGates, Gates’ and Rice’s consulting firm, but said he met Tillerson “years earlier through our mutual involvement in and leadership of the Boy Scouts of America.”

All in all, it’s an interesting choice. I think we all have similar feelings — he’s impressive as shit because he’s the CEO of Exxon, but he’s also a bit of a question mark, as he’s never served as a formal diplomat ever.

**For transparency: I decided to make this a late addition. Rice and Gates are widely and deeply respected foreign policy experts, but do believe it’s worth mentioning any financial ties to Exxon.

The above information was accumulated from my brain, the internet in general, listening to radio and television, an OK ability to formulate my own thoughts and opinions, and Business Insider and CNN.