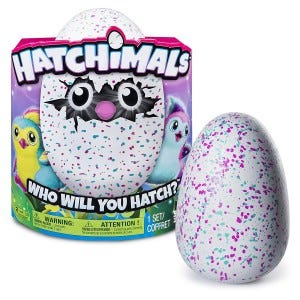 This just in: Hatchimals are the 2016 Tickle Me Elmos. On Tuesday’s episode of KFCRADIO Kevin told a story of these sold-out toys, but I didn’t retain any of the details. It’s something like an egg that hatches and then you have to feed it when it’s hungry, but no matter. When I hear the words “sold,” “out,” and “everywhere” I cease to exist in this realm; my eyes glaze over and I go to an intangible place where the inside of my brain looks like Russel Crow’s in A Beautiful Mind, except instead of secret government codes, I am deciphering methods to get my hands on a Hatchimal. I start with the basics and call my local Target to make sure the rumors are true, that this Furby-Tamagochi hybrid is in fact in as high demand as Kevin claims, that this toy is even worth me vying in the first place. When the woman on the other end laughs like I’m an idiot for even asking if it’s in stock, I am happy to know the hype is real. I do a quick search on Craigslist, and find a few units at 100-200% markups. After a few fruitless email exchanges, I find an available Hatchimal in Soho – and immediately, I have a flashback of my last encounter on Craigslist. It was the year 2002, I was a sophomore in high school responding to a hooker job listing. I had never done anything like it before, but young, dumb, and bored, I made my ex-boyfriend take me to an apartment complex where a man in a wig wearing a silk robe opened the door and when I shook his hand his skin was so creepily soft that I turned around and left without saying a word.

So what is a girl with Craigslist PTSD to do? It’s too dangerous for me to go by myself to meet a stranger in a dark alley with cash. What if he rapes me? Or worse, what if he rapes me and then doesn’t even have a Hatchimal? I wonder for a split second if I can convince my dad to go pick it up for me, but I ultimately decide I don’t want him to get raped either.

So I call Glen, who was once my intern. 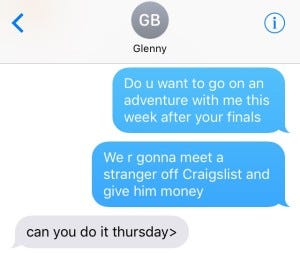 So it’s decided then, Glen is my bodyguard. I email the guy back asking if Thursday is too late. 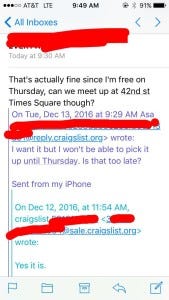 What? This guy is flipping the script on me. I’m supposed to be the one trying to meet him in a public place, not the other way around. I’m kind of offended, but I agree to it anyway.

If we go missing, you know what happened.