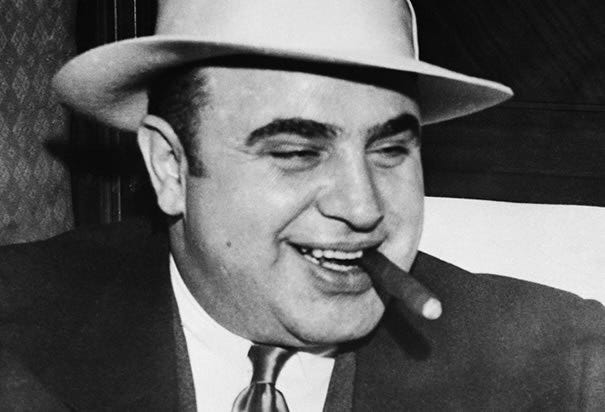 (Google imaged “Syphilis” for a featured pic and am scarred for the rest of this life and probably the next. So here’s Al Capone.)

DM - Syphilis could become impossible to treat with key antibiotics, doctors warn amid concerns over a new drug-resistant strain. Once a death sentence, the vast majority of syphilis cases today are curable with penicillin injections. However, a new study reveals an aggressive new strain of the infection is more widespread than previously thought – and there are limited ways to control it. There are two common types of syphilis: Nichols and Street Strain 14 (SS14). In an analysis of syphilis samples, researchers by the University of Zurich found the most common to be SS14-?, a sub-set of SS14. Alarmingly, 90 per cent of the SS14-? samples they analysed were resistant to antibiotics.

The curtain is closing on the show, sailors. It’s not a good day when you discover another STD tough enough to survive a pill or the total ignorance of being tested. I respect the fact Syphilis is making a comeback after being declared basically useless. It’s similar to a scrappy boxer like Rocky or Cinderella Man that keeps on fighting to survive and somehow becomes unstoppable. Now that’s a STD you can buy a beer. Regardless, it may be time to require everyone to wrap it up for good. What was there to fear going raw dog all the time before the invincible STD’s hit the streets? Chlamydia? Little to no side-effects besides infertility, which is a win anyways. Herpes? A nuisance that only comes out at random times that you are forced to deal with like acne or a woman announcing a college football game. Magic Johnson single handily cured the HIV. Even knocking someone up is fixable with hours of negotiation or scrambling some eggs. So let’s figure out something If there’s not a combination of drugs out there now that can take this bacteria bitch down then we’re just going to have to go old school and stick a turkey baster in the dick and give it a couple squirts of Mercury. If he dies, he dies. Or just follow the words my drunk Uncle boldly proclaimed once during Christmas dinner: If it smells like Trout, GTFO!

Still, I’d take Syphilis, Ebola, and Zika to the face combined rather than dance with that deadly version of Super Gonorrhea I’ve spoken about before. Having your balls feel like a bubbling cauldron while pissing sulfuric acid is no way to go through life.

PS – Still the best advice you can give to a child: