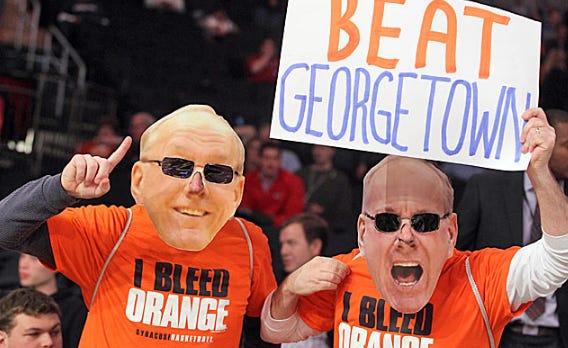 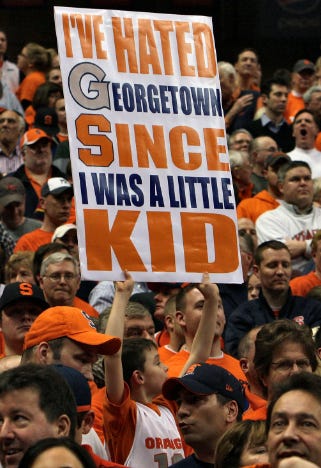 Let’s start off with the big elephant in the room. It’s been a rocky start for the Orange, a team myself and others thought would be something special. We’re 6-3 through the first nine games, but have lost all three important games (South Carolina, Wisconsin, Connecticut). There have been disappointments all over the floor, particularly the big men, and it’s tough to watch at times. The good news is that it’s still very early, but it’s time to wake the fuck up. Let’s look at the good and the bad thus far…

(When I refer to the important games I’m referring to South Carolina, Wisco, and UConn)

White has been the exact player we hoped he would be. He’s our leading scorer at 16.9 per, and is shooting 41% from beyond the arc. These are the numbers we expected from the Nebraska transfer, but he cannot do it all by himself.

Thompson broke out on Saturday against BU scoring 22 points off the bench and grabbing 7 boards. He even earned the start in the second half as the Orange went on a 16-0 run. Thompson hadn’t gotten much of an opportunity before this game so expect Boeheim to increase his minutes and see what the kid’s got.

Gillon’s 23 point outburst against BU on Saturday was very encouraging considering he had been shutout in his previous two contests. After going 6 of 7 from long distance Gillon sits at 48% from 3 point land. He’s been a great addition off the bench and brings an instant-offense type game to the Orange. The issue is that he was fairly invisible in Syracuse’s three losses.

The Rest Of The Team

White is the only guy on the team in double figures. I’m looking at you Tyler Lydon. Maybe being dubbed THE GUY is getting to his head a little bit and the added pressure has caused him to press, but he has to step up. Averaging 9.9 points and 7.2 rebounds a game is nice and all if you are a role player, but not as the star. His field goal percentage, three point percentage, and blocks per game are all way down from last year’s freshman campaign. If this team is going to do anything this year Lydon has to grow a pair and step up.

I’m going to try and not be mean here, but Tyler Roberson are you fucking kidding me? I wanted to believe in you. I wanted to trust you. I wanted you to be the guy we saw in Duke last year. And what have you done? Scored 12 points over the last FIVE games with 17 rebounds. That’s good for an average of 2.4 points and 3.4 rebounds per game. Roberson, the starter to begin the year, has fallen so far into the doghouse I don’t know if he can get out. Watching his opening minutes against UConn I got excited because he immediately ran the floor on a fast break leading to a layup and then got a steal on the following defensive possession. What a fucking fool I was to think this was a turning point. No of course it wasn’t. The bad Roberson soon returned and was extremely ineffective. This past Saturday he played his most minutes since South Carolina (18) since the Orange were blowing out BU in the second half. You know? Get some confidence in the guy, get him going. How are you 6-8 and in the game for 18 minutes against a far inferior opponent in BU and you grab THREE REBOUNDS. Shit just blows my mind. I gave as much effort being nice there as Roberson does grabbing a rebound.

Frank Howard has three games with double digits assists. Good. Those three games came against South Carolina State, North Florida, and BU. Not good. In the important games this year Howard’s assist numbers fall to 3,2, and 3. Really not good. He’s also missed his last 14 shots which is not ideal for a guy that looked upon as a vastly improved offensive threat. He’s failed to make more than four shots in any game this year. It’s becoming very obvious quickly that he isn’t the answer for the Orange at the point guard position.

Boston University, UConn, North Florida, Wisconsin, South Carolina. What does these five teams all have in common? Well they’re Syracuse’s last five opponents, but more importantly they’ve ALL out-rebounded the Orange. It’s just not going to work like this. We’re not even into conference play yet and you’re getting out-rebounded by NORTH FLORIDA AND BOSTON UNIVERSITY. When you’re 166th in rebounding margin that’s not good. In fact it’s actually very bad.

When UNC Wilmington, Saint Peter’s, and fucking Loyala Chicago are rebounding better than you that is as red as a flag as I can think of. Tyler Roberson wake up. Tyler Lydon wake up. Taurean Thompson step up. DaJuan Coleman step up. Crash the glass with the fucking glass it’s ridiculous. These guys are 6-8 and taller and they can’t manage to grasp the concept of finding your man and boxing him out. Let’s look at the finish at the Garden last week against UConn. 6-6 Freshman guard Tyus Battle gets caught ball watching with 2 seconds left in a tie ball game. Dude there’s two seconds left, your teammate just hit a prayer three pointer to tie the game, and you’re caught standing under the hoop ball watching. It’s these types of mental mistakes that will kill a season.

So What Needs To Happen?

I never liked him when I went to the school because of his stone hands and inability to be a stretch four (which he thought he was). What he did well was rebound the basketball. During last year’s magical tourney run Tyler averaged just over 11 boards a game including 18 against Dayton. Where has that Tyler Roberson gone? He’s a senior that’s playing like a scared freshman and that’s not going to cut it. We need him to return to last year”s form as soon as humanly possible.

It’s tough to ask a freshman to assume the leadership role on a team with graduate-transfers and upperclassmen, but nobody is stepping up. Andrew White is a fantastic basketball player and has tons of experience, but he’s not the leader we need. White can’t create for himself, he needs to be setup, which is fine but he can’t the guy. Frank Howard has the ball-handling ability and vision to be a leader, but his putrid shooting numbers don’t scare anyone. Lydon should be this guy, but it appears he lacks the mental ability to be THE GUY at the current moment. He was thought to be a lottery pick in next year’s draft, but he better assert himself more into the offense if that’s going to happen. Tyus Battle has all the tools, he just needs to play fearless. The biggest knock on Battle coming into 2016 was his shooting ability, but he’s silenced the critics on that end. Battle is now up to 44% from three point land, good for second on the team. We know he has great ability to slash and score at the rim no problem, the only issue is experience and confidence. By the time conference play rolls around I want Battle to transform into this go-to guy. Malachi Richardson turned into this guy late in the season, but hopefully it happens to Battle before it’s too late.

Howard in the important games has been mediocre at best. His high assist totals come against inferior opponents and the offensive improvement isn’t to the level we’d all hoped. In just 20 minutes per game, Gillon is averaging 9.2 points and 3.2 assists per game while shooting 48% from three. I’d really like to see how the offense would look with a Gillon-Battle-White-Lydon-Coleman lineup with Thompson first off the bench. That lineup is full of shooters and should be able to produce our best offensive numbers. It may not work defensively because Gillon is severely lacking in size to be at the top of the zone, but it could work who knows. All I know is that I’ve seen enough of Frank Howard and what he’s going to be, and it isn’t enough.

So that brings us to Saturday. One of the biggest rivalries in college basketball returns to the Carrier Dome for the first time since 2013. Thank God they brought this back as an annual match up and I’m happy to say I’ll be in attendance on Saturday. 91 games have been played between these two historic teams with Cuse having won 49 of them. Last year when they played Georgetown, Jim Boeheim was just beginning his suspension which threw assistant Mike Hopkins into the fire. The game wasn’t really close as the Hoyas stretched their 12 point halftime lead to as much as 20 in the second half. Georgetown’s only impressive victory this year was in the Maui Tournament against a depleted Oregon squad. They enter this game on a four game winning streak against cup-cake teams like Elon and Howard which doesn’t scare me. It should be a close game as Georgetown has shooters that can stretch the 2-3 zone, especially leading scorer Rodney Pryor who is shooting an absurd 52% from downtown. It does scare me that Syracuse doesn’t look great coming into Saturday and this game falls in mid-December when classes are done for the semester, so there’s no telling how many students will hang around for Saturday. Might be up to me to get the crowd going. Challenge accepted. 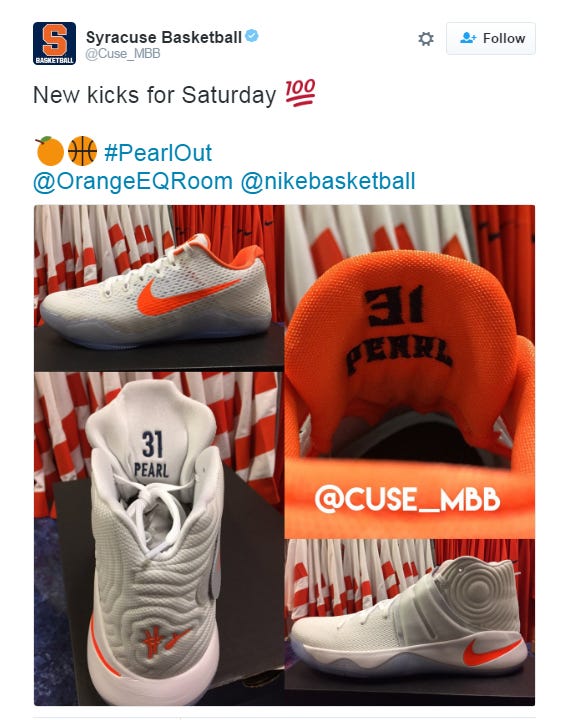 4. John Thompson Gets Ejected, Waves On The Orange Faithful, Syracuse Goes On To Win And Capture The Big East Regular Season Title

One of my favorite moments from one of the greatest men to put on an Orange uniform.

It’s 11:30 AM and Georgetown still sucks