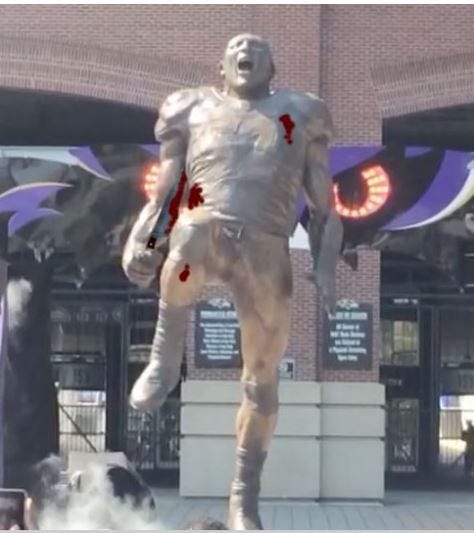 (Editors Note: Banks reposted his article from last year about how Pats fans are the most delusional, hypocritical fans in the world.  I guess that means I have to repost my original response as well? Here you go)

So everybody is up in arms about Barstool Banks article today trashing the Patriots.  They want a response. Well it’s pretty simple really. The easiest way to look at the difference between the Ravens and the Patriots is with how each team handles murderers. Aaron Hernandez killed a bunch of people. The Patriots cut ties with him instantly. Ray Lewis killed a couple guys and the Ravens built a statue for him. That’s the difference.

Listen every team has bad seeds. It’s the NFL after all. The difference is that the Ravens not only employ murderers, wife beaters and child rapists but they embrace and celebrate them after they’ve committed well publicized crimes. It’s not just the organization either. It’s the fans. That’s why Ray Rice was still getting standing ovations and still on the practice field even after the TMZ tape was released. That’s why the Ravens stood by him and made his wife apologize for provoking him. That’s why TSizzle is the face of the franchise even though he pours bleach on his wife and kids. Do you think the Patriots would have waited that long to cut Rice? Do you think Pats fans would have given him a standing ovation? The answer is obviously no. They proved it with Hernandez and they’ve proved it in the past. Remember Christian Peters? The Patriots 5th round draft pick in 1996? The Patriots relinquished the rights to Christian only a week after the draft. The team said that Christian’s behavior was “incompatible with our organization’s standards of acceptable conduct. It was the first time in NFL history that a drafted player had been waived by a team before the start of training camp.