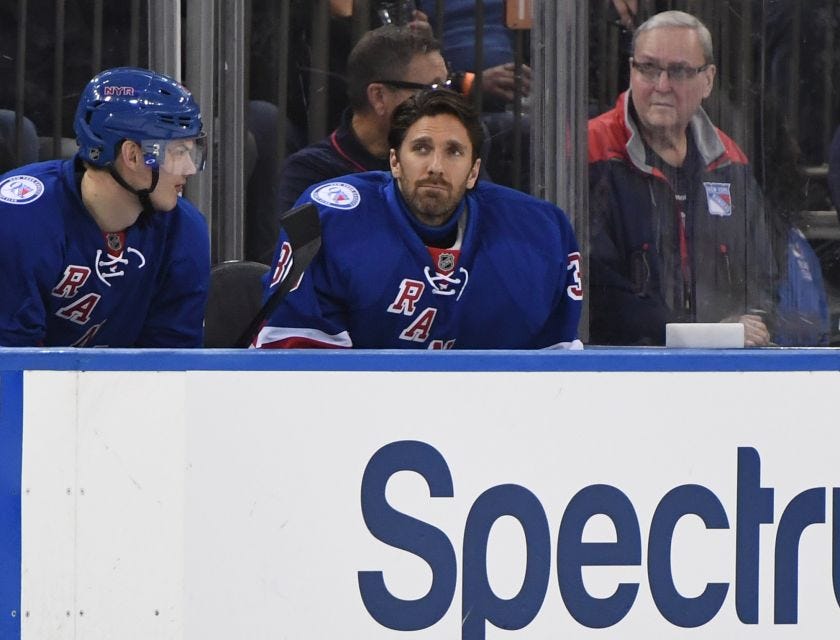 Of course he will. That’s called “click bait”. Relax.

There’s no goalie controversy in New York. Vigneault isn’t singling out Lundqvist for the team’s struggles before Raanta came in & received the NHL’s second star of the week (3-0-0, .984 save percentage with back-to-back goose eggs). It’s very strange that there’s a segment of Rangers fans complaining about their team being able to ride a hot backup. I understand the loyalty to Hank – he’s been the backbone of the franchise & one of the NHL’s best for the last decade. But it’s OK to acknowledge he’s hit a rough patch without saying he’s finished. Fact is, it’s not just his last handful of games that have been head-scratching. It goes back to March of last year, right after his 34th birthday.

Since then, Lundqvist has had 38 starts including playoffs. Only 3 times has he allowed less than 2 goals & one of them was Game 1 against the Penguins when he left after the first period. In HALF of those starts he’s been beaten for 3 or more. Now that’s not all his fault – the Blueshirts have their share of defensive inadequacies. This year’s team is certainly better though, yet Hank’s 5×5 save percentage this season ranks 33rd among goalies with 11+ games (.916). In comparison, Raanta’s 8th (.942) & they see just about the same number of shots per 60. Behind last year’s awful defense, Lundqvist finished in the top-5 while facing the most shots in the league. The deeper you dig into this year’s numbers, the worse they get. In close game situations his save percentage dips to 41st – below 90% – ahead of only Michael Hutchinson. You simply can’t dispute the drop off.

The biggest issue isn’t Henrik’s ability to make a big save – it’s making the low/medium percentage ones. In his last 3 games before riding the pine he ceded 10 goals to the Isles, Canes & Sabres. Four of those were from beyond the circles (one was outside the zone) & another two came from tougher angles outside the slot. It hasn’t been a question of being a little “off”. It’s clear that something is wrong and there’s no problem addressing it with a few nights off in early December. Especially if you’ve got a quality backup like the Blueshirts have had for the past few seasons.

So is Raanta this good? Obviously not – and Hank isn’t as bad as his recent play has shown. Antti’s had a couple easy games against the Jets & Devils, but let’s not give a ton of credit to the Rangers playing so much better defensively. Both those squads rank in the bottom 3 in Corsi-for. As for the game in Chicago, there’s no denying Raanta was lights-out. This team still belongs to The King though. He’s said all the right things recently, but you know this is burning him up inside. He knows his team needs peak Lundqvist if he’s gonna hoist that Cup and he hasn’t played at the level he’s used to. Call these last three games “rest”, “motivation”, or whatever you want. Just don’t be surprised to see Hank bounce back with a run of his own & we’ll forget all about this soon enough.