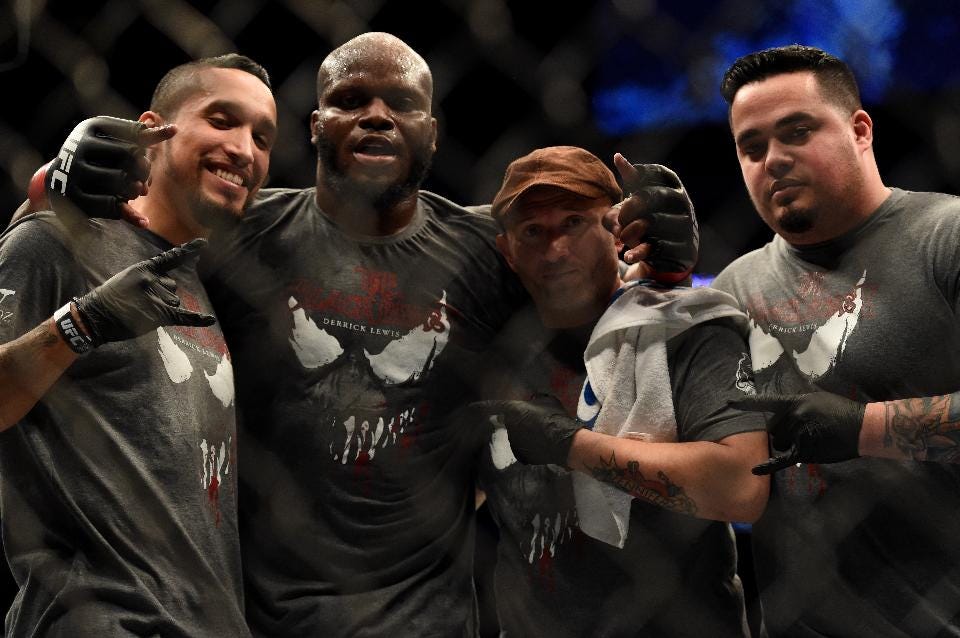 [Editor’s Note: Our UFC chap Bennett sent this puppy in a little too late last night to get published, so as a special surprise you get the Friday Night action previewed here, as well. So basically you can see how he did and heckle accordingly. Godspeed.]

Full slate of fights between tonight and tomorrow. Unfortunately, tonight’s fights are all on UFC’s Fight Pass (remember, Fight Pass = Netflix of UFC). Not much moves the needle tonight up in Albany. At least not much that would propel a casual fan to sign up for Fight Pass. Derrick “The Black Beast” is headlining against Shamil—don’t worry about his last name. The UFC is definitely trying to put Lewis over, and it seems to be working. Everyone loves a good Heavyweight, right? He’s very active, with this being his fourth fight in 2016. Good for him. He’s a -184 favorite.

Definitely have to shout-out to the only Hofstra bro (that I know off the top of my head) on the card, Gian Villante. All-American linebacker, great shit-talker, hopefully not on the losing end tonight. He’s favored, but after losing 2 of his last 3, you have to think his back is up against the wall against a stand in Russian who Villante doesn’t know much about. At -208 the odds are in Villante’s favor, and I’ll never pick a Russian. Maybe Villante will try puking up milk onto his opponent for old time Hofstra pride/Dutchmen sake.

Keeping in mind this is for the casual fan, I’ll try to get the fighters right this time. But really, does it matter what Thiago Alves fought? Jim Miller won. And to the birds chirping about my picking of Weidman over Romero, I’d hate to know who’s side you would’ve been on during the Bay of Pigs. JFK over everything. Also, Meisha Tate – maybe let us know that you were gonna mail in your last professional fight.

The main card looks great. But first, the Fight Pass prelims have one fight in particular that I can’t wait for. Makdessi v. Vannata is going to be good. Vannata filled in against Tony Ferguson for his UFC debut and shit got crazy. Vannata had Ferguson wobbled early before they both slugged it out. Ferguson won, but a mental note was made to be on the lookout for “Groovy” Lando. Makdessi is absolutely no slouch so you know this is going to be a banger. Lando at -185.

Gastelum has been fed to the wolves. There is no better opponent for a guy who continually misses weight than Tim Kennedy. Just a Captain America, if you will, who’s an actual Army Ranger Sniper. Because of active duty, Kennedy hasn’t fought since his flukey loss to Yoel Romero. The guy looks like an action figure, has a tv show called “Hunting Hitler,” and made weight for his last scheduled fight (which was supposed to be at the garden against Rashaad Evans before Rashaad was nixed) when he didn’t have to. Gastelum is a tough wrestler, but in this matchup I don’t think he could be facing a tougher opponent. Go Kennedy, Go America. Kennedy -145

Everybody’s hyping up the Korean Superboy Choi. He’s 14-1 with his loss to some guy whose name I can’t pronounce. His dismantling of Sam Sicilia was awesome. He looks the part for sure. Not so fast my friend. Cub Swanson isn’t about to be pushed over for some Sage Northcutt wannabe. Cub is 2 for his last 4, winning 2 by decision and losing 2 by submission. I wouldn’t say he’s done, he certainly has good fights left in him, but in the 145 lb weight class, I’m not sure Swanson is making any more noise. His last loss was to the guy headlining this card. He’s equally good on the ground and standing up, but I got a feeling about Doo-Hoo. Maybe a second coming of The Fireball Kid? Where my PRIDE guys at?! Doo-Hoo at -210.

Powerful fight. Great welterweight bout. Cowboy showed up to the media day face-off in his cowhide duster, cowboy boots, hat and weird turquoise rings that westerners wear – looked awesome. Matt Brown wouldn’t turn away from him to face the press and just continued to stare down. Donald, as a young fighter probably would’ve tried to throw down. Instead, he laughed it off. It makes for an exciting fight.

Cerrone at 170 is destructive. The 4 piece he ended his last fight with was textbook stuff. This should probably be no different if not for who he is fighting. Matt Brown literally died and came back to life. He is not going to be put away easily. I think Brown will come charging in and take the fight wherever it happens to go. If it stays on the feet, he’ll stay up and trade with Cerrone. But, if it makes its way to the ground he’ll be forced to wrestle. Either way, Brown will be over aggressive which is where I think Cerrone beats him. I’m thinking Cerrone by submission, because Brown isn’t getting knocked out. Cerrone at -280.

This is the changing of the guard between someone who was once the UFC’s golden boy/Wheaties box/show pony in Pettis against an emerging superstar – Holloway. I’m not really sure how the interim title works in but regardless, this is a title fight. Holloway is coming into this riding a 9 fight win streak while Pettis… jumped off the cage and kicked some guy in the face once (RIP in peace Bendo). It just looks like Holloway is unstoppable and is fighting the best he has ever fought at such a young age. Pettis on the other hand is at a lower weight class and I think is trying to still pick up the pieces from when he lost to RDA. Not being in his natural weight class is going to hurt him when he goes against an eventual champion like Holloway. I mean, did you see him against Lamas? Just looking to trade in the middle of the mat at the end of a fight. Pure Diego Sanchez stuff. I think Holloway takes the interim title and look for an eventual rematch with… Conor McGregor. Holloway at -210.