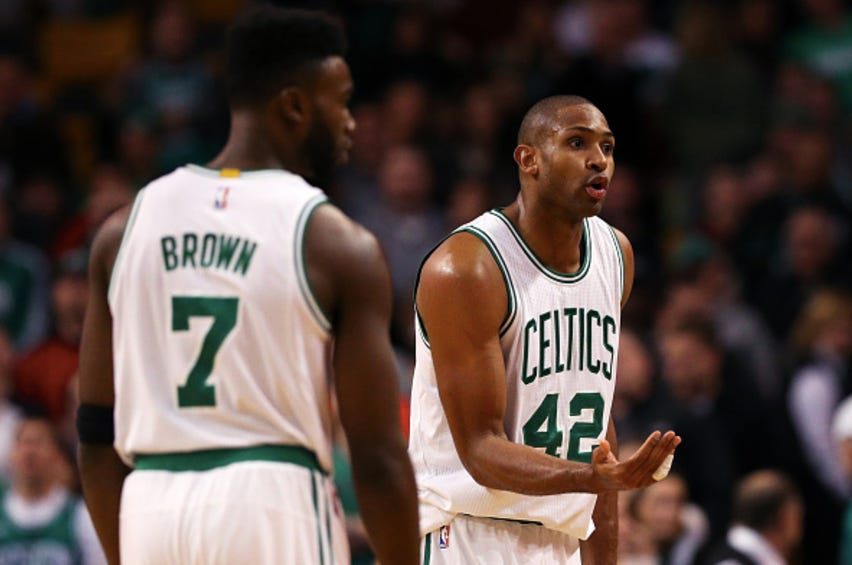 When I was younger and in high school and would go to the Garden to watch the Celtics play, it always seemed like they were playing the Raptors. I’ve probably seen more Raptors/Celtics games than any other matchup and those were fun because during this time period, the Celts rarely lost. Well, things have certainly shifted. Since the 2013-14 season, Toronto is 9-4 when playing the Celtics, and even more recently, is 4-1. If you go back and watch a lot of those losses there is one common theme. One bad quarter usually fucks everything up. The Celtics will be right there with TOR, then play a shitty 12 minutes, and that’s a wrap.

Well, last night was no different. It seems like every few weeks we talk about a frustrating loss, well just this past week I’d say you can add two more to that list. Despite not having Isaiah in the lineup, this game was still very winnable and really a game you shouldn’t lose at home against a team that played the night before. That’s bad.

And honestly I’m with some of you that are tired of this team dropping games to good teams. While it doesn’t cause me to panic or anything like that, these close games are going to be important when we take another look at the standings in April. The East will most likely be so close that every game is going to matter. Now I’m not one of those who think losing a game in December proves the Celtics aren’t title contenders because guess what. They aren’t title contenders even if they won this game, or the Houston game, or that SA game over Thanksgiving. Take last year for example, they beat GS, OKC, CLE, TOR etc during the regular season, and that certainly was not a title team either.

It sucked because for me, this loss was more self inflicted than anything TOR did, and we really saw why this team needs Isaiah (more on this later). I hate to start your Saturday this way, but let’s begin.

– The good news is there was a ton of stuff to like about last night’s performance, and we may as well start with the guy who had the best night, and for me that was Avery Bradley. Since Isaiah went out, Avery has been great in terms of being aggressive, and stepping up his game offensively. Another solid shooting performance 7-11 (5-7) his 19 points were tied for the team lead, and one of the main reasons you were probably happy watching this game early was because of him. He carried the team in the first quarter per usual (8/3) and it really is impressive when you think of where he was offensively when they drafted him, to how beautiful his shot looks now. One shot really made me stop and appreciate this, and it was this corner three

I know the more impressive part of this play was the Smart pass, but Avery’s mechanics on his jumper are so vastly improved, it gives me hope for some of the guys who “can’t shoot” currently on the roster. Oh, and don’t forget the Celtics didn’t score for another 3:00 after this bucket, so that was awesome too.

What stood out to me with Avery’s current stretch is he is scoring from the outside, the midrange, and taking it to the basket, something he doesn’t really do when Isaiah is back.

– It won’t happen often, but Al Horford led the team in shot attempts, and overall played pretty well: 19 points 7 rebounds 6 assists is something we can, and should, get behind. One of the best parts about having a player like Horford, is the wide variety of ways Brad can use him. For example, I used to lose years on my life being upset how Sullinger would run three point line to three point line. But now? With Horford? This negative has now become a true positive

As with any game Horford plays, it isn’t just about his scoring. I am getting VERY close to calling him the Celtics best passing big man since the KG days

This play stood out because you could tell Horford knew what he had before he even caught the ball. Absolutely zero hesitation and he passed up a good shot for a great shot. Basketball IQ like you read about

– We are quickly approaching the point where Brad is going to be forced to give Jaylen Brown consistent minutes and I for one could not be happier. Guess what? Jaylen was a team high +6 in his 20 minutes of action. We got a glimpse of everything I want for Jaylen. I want him to attack the basket

Check. I want him to play good defense

Check. And I want him to be able to knock down a midrange jumper

– It is almost shocking how different of a player Marcus Smart is when you simply ask him to create for others instead of focusing on creating for himself. He has shown me these last two games he’s more of “point guard” than Rozier, who I would consider a better scoring guard. The way Marcus moved the ball gives me hope for the future in a sense that we may have found a way for Marcus to be successful, because as we saw again last night, that way is not shooting.

– The Celtics usually don’t win if they don’t defend, and after giving up what seemed like a billion points to anyone who played them, I thought their defense was pretty good in the first half. They held TOR to 44 points on 41% shooting, DeRozen was 4-12, and the Celts owned the battle on the glass. If the Celts are ever wondering how they can beat this team, the secret sauce is in those first 24 minutes. A team that barely turns it over had 7 at halftime, and that helped play into how well the Celtics played

Their first half was nearly flawless. They shot 46% from the field and 47% from three, they rebound like I mentioned, and they even got great production from their second unit (21 points). Sadly, things were about to get way, way worse.

We talk all the time about how the Celtics usually lose when they stop being aggressive and settle for threes or contested long twos. Well, allow me to show you their shot chart from this third quarter and then let me ask you if you’re surprised about what happened 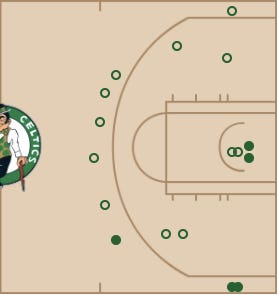 This makes me angry just looking at it. You have a chance to pull away from a team, and you take FOUR shots in the paint? Part of this for me is on Brad, but part of it is also on the players.  They need to cut this shit out because this type of basketball isn’t going to beat the fucking Nets let alone the second best team in the East. So infuriating. The numbers are horrific, 18 points on 27% shooting, and FIVE missed FTs. I’d say I was shocked but….

– 1st quarter: 28 points on 43% shooting. Then that third quarter happened. You say coincidence I say wake the fuck up. The Theory never lies.

– Yup, still not enjoying the Tyler Zeller experience. Never have I seen a 7fter give up so many offensive rebounds it’s really kind of impressive. Just give Jordan Mickey these minutes, how much worse could it be?

– I, much like you, probably screamed the following sentence three times at a minimum throughout this game. “KELLY SHOOT THE FUCKING BALL”.

I’ve certainly made no secret how much I hate hesitant Kelly Olynyk. When we get Aggressive Olynyk, this team is different. When he turtles and passes up open shots for no reason I want to pull my hair out. Really Olynyk is out there for one reason, and that’s shooting, so when he doesn’t shoot it makes you wonder what else he does? Screw hesitant Kelly, that guy is an asshole.

– Watch two seconds of film on DeMar DeRozen you see he LOVES midrange jumpers. Maybe more than any person on the planet. So why, at a critical moment in the game, is this your defensive strategy?

– I hate that it had to happen this way, but I’m glad we can put all that Isaiah bullshit talk to rest. The number one thing this team needed in that third quarter was a player that could create his own shot and get to the rim. Something to break up all the threes, and few do that better than Isaiah. The backcourt that is apparently good enough to take over shot 7-23, and Lowry had 34, so where was the defense? What do we say all the time, in the NBA to win you need talent. So someone will always have to explain to me there is a section of people that thought you could take a talent like Isaiah AWAY, and would be better.

– It’s been a while, but I cannot let it slide. The Celtics blew this game in part because their good shooters could not make a FT. Horford missed three, Olynyk missed, Smart, Rozier in total they went 15-22. What was the score?

– I understand that some of these were decent looks and threes you should live with, but 42 3PA when you take 81 shots is NOT how this team should play if they want to win. Great they tied a franchise record in makes but guess what, they shot themselves out of this game. I probably lost 2 hours of sleep replaying those Jae Crowder fourth quarter transition threes. That’s what I mean when I say it’s on the players too. They need to exercise better shot selection, and that starts with not falling in love with the three. They are good enough at it that they can 100% be part of the Celtics offense, but they are not the Warriors.

– No other way to say it, this was the worst performance of Jae’s season. Just one of those nights that happens to almost every NBA player. As well as Jae has shot the ball this season, I am confident in saying a 2-11 (1-6) performance is more the exception than the rule. Having said that, his misses were brutal. Nothing mechanically says his shot is fucked up, shit kinda just went in and out on him. Now I would have preferred he realize that and instead take it to the basket since he is a physical specimen, but he didn’t.

– Listen I think it’s really lame to talk about the officials in a game that you lost for legit self inflicted reasons, but shit the Celts have been boned a few times in their last two games. First the NBA admitted they fucked up the end of that HOU game, there was the Avery 3 that wasn’t, and now last night, this block by Horford is a tough call to make.

You gotta think Celts score on that fastbreak and still leave enough time for one last possession for a tie or win if they got a stop. Instead it ended the game.

Up next come OKC (who just lost) and SA so buckle up because these are about as big a stretch as you can have in mid December. Already on a two game skid, the Celtics need to stop the bleeding, and to do that, are going to have to beat some pretty fucking good teams, on the road. Word is that Isaiah isn’t coming back until maybe Wednesday, and rest assured, the Celtics play like this against OKC, they are going to get blown out. 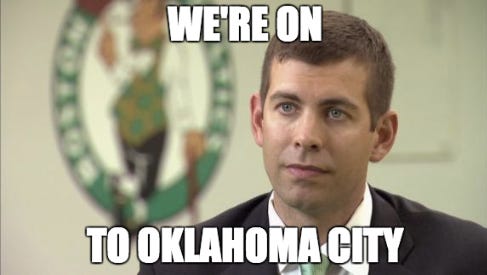