It’s finally Saturday and a solid slate of games for college basketball. After a rough couple of days in the college basketball world, we’re finally treated to a day where there is a good game on at all times. The story right now though is Carlton Bragg from Kansas, who is accused of striking his girlfriend and throwing her down stars. On top of that the mugshot he took is uh not a good look. It might help to look somewhat regretful and not happy that you are accused of domestic battery. I’d be surprised if he ever plays for Kansas again, especially with Bill Self’s history when it comes to booting people off the team. Here’s a look at his mugshot: 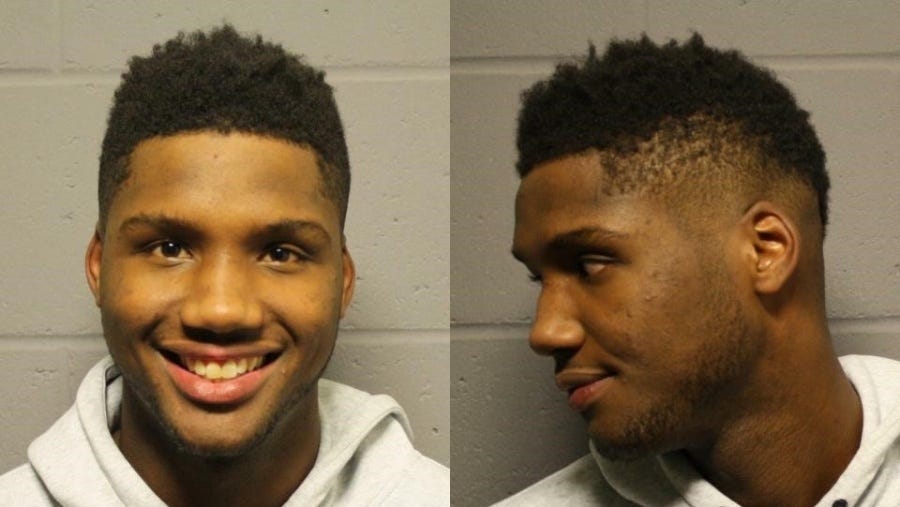 This game is for all the old curmudgeons of the world who hold being a one-and-done against a program or player and I fully expect them to use highlights of this game instead of Viagra. These are two teams who have a bunch of upperclassmen and we saw what Mike Brey had to say yesterday. On the court though, they are pretty similar to each other. Notre Dame isn’t a team that’s made to beat Villanova. You beat Villanova with size and defense. Notre Dame doesn’t really have either of that. The Wildcats still have a gaping hole in the frontcourt the size of Omari Spellman. Neither team draws a ton of fouls, so expect this game to be free flowing and fun to watch. They are both methodical on offense, spreading the floor and looking for the better shot, but both can run when they have to. There are a lot of similarities on the roster but watching Vasturia vs Hart go 1-on-1 is going to be all kinds of fun. The other thing to watch is how they try to spread each other out on the floor and let guys like Eric Paschall and Bonzie Colson go to work.

Pick: I like Villanova here. Neither team will have a true homecourt advantage since the game is being played in Newark, although that means everyone who has never been to Indiana will be wearing the green and gold. As I said earlier the way you beat Villanova is with a contrasting style. You slow them down offensively, making them turn the ball over and on the offensive side of the ball you have a presence in the post. Right now they are similar teams with Villanova just being better.

Wisconsin figured shit out and they are starting to become scary. After what looked like a letdown last week against Oklahoma, they bounced back in the second half to completely dominate the game. Marquette on the other hand has struggled a little bit, despite winning games. The biggest change for Wisconsin has been the play of Nigel Hayes and getting him comfortable in his role. The Badgers need Hayes to be a playmaker first with his passing and then hit spot up shots. They need to continue to play through Ethan Happ and Bronson Koenig as the main two scoring options, this is how they are dangerous. But, what I really like about Wisconsin has been the play of D’Mitrik Trice, who is shooting 63% from three.

Pick: Marquette needs to keep Wisconsin off the offensive glass as the Badgers are one of the 10 best teams at getting offensive rebounds. Ethan Happ always gets in the right position and does a good job of keeping the ball high and finishing strong. Marquette will look to run, wanting to hold the ball as short as possible. Give me Wisconsin by six in this game.

Cincinnati has been a pretty pleasant surprise this season and really just saving the AAC from being completely irrelevant. The Bearcats aren’t nearly as bad on offense as they have been in recent years and that’s thanks to the play of Kyle Washington – a transfer from NC State. If Cincinnati can get Troy Caupain going, they become that much better. They still are struggling shooting from three, but that goes hand in hand with Caupain as he’s shooting just 22%. If you’re Butler, you’re going to want to get Kamar Baldwin going. He’s a great change of pace compared to Tyler Lewis. The Bulldogs do like to work for a good shot, especially when you consider its effective field goal percentage being 57%.

Pick: This will be a slower pace game as Cincinnati wants to beat you in the 50s. Hell, look at what they did to Iowa State in Ames (sure the loss to Iowa makes that win a little less impressive, but winning on the road is tough). I think Cincinnati has the depth to play with Butler and despite it being at Hinkle, this will be a close game. Butler will want to open the floor to score. Give me Cincinnati to cover though.

One word here, tempo. That’s who will win this game. Michigan wants to play slow, take clock and make you work on the defensive side of the ball. UCLA wants to run and gun. They want to try and score 100 on you each time they are on the court. Whoever wins tempo, wins the game. While Michigan does play the 348th slowest pace, Beilein does want them to run a little bit more and he has the team to do it. With a veteran backcourt and a guy like DJ Wilson, the Wolverines should look to run. But, against UCLA that just means Lonzo Ball has the rock in his hand more times.

Pick: I honestly have no idea on this game. I still like Michigan and think they are talented, but we’ve seen what UCLA can do. They have the ability to go on a 15-0 run and really open the game up. It’s sort of a rock and hard place for me as I don’t love taking road teams and I love going against teams coming off a big win. Pauley will be sold out and UCLA is just getting better. Gun to my head I’ll take the Bruins at home to win by 12.