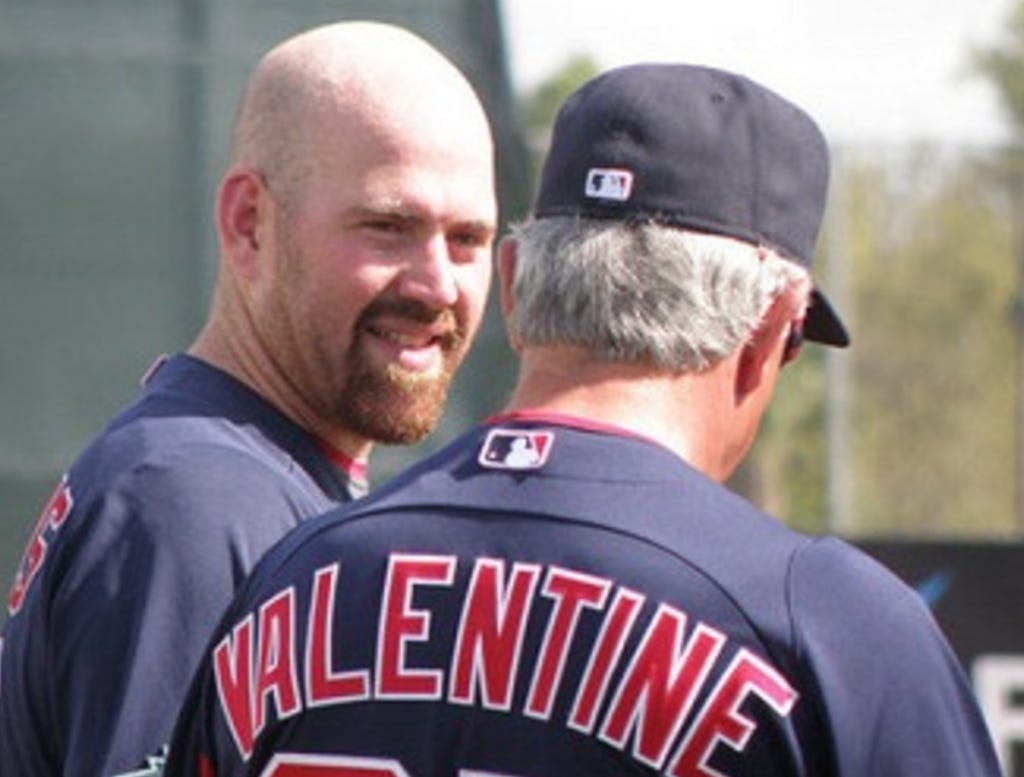 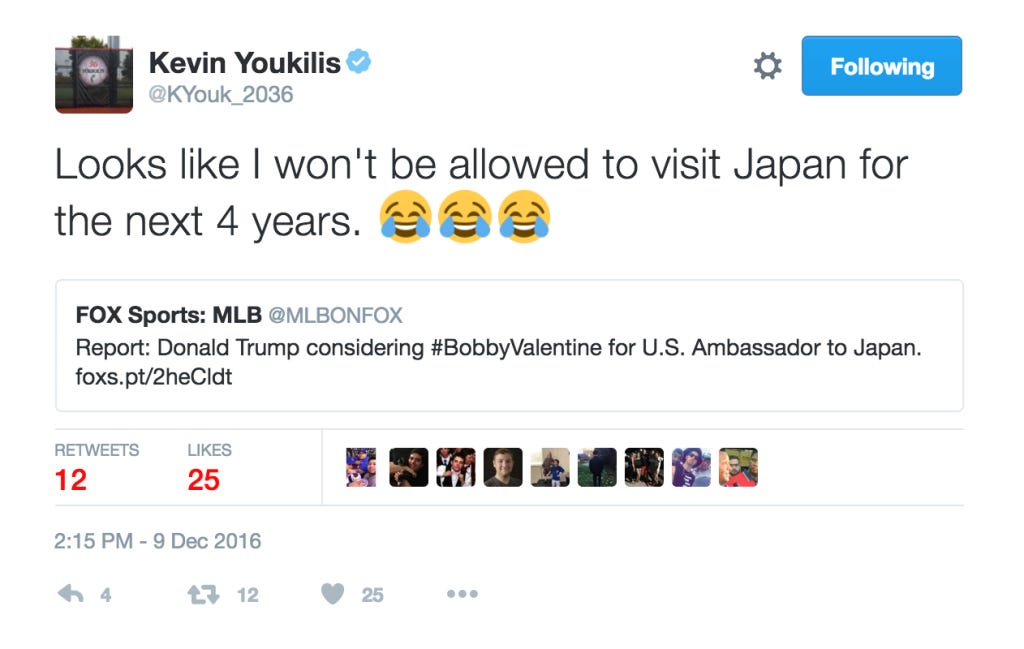 By now, you’ve probably heard that Donald Trump is considering making Bobby friggin’ Valentine the ambassador to Japan for the United States. Of America. The country.

I avoid politics like the plague. I’m not a politics guy, and I never have been, nor will I ever be. My closest involvement with the political scene was when I drunk texted Riggs after the KFC Radio show at the Wilbur. But when Donald Trump gets elected president, all the rules you knew before get thrown out the window, and the next thing you know, I’m getting dragged into somewhat of a political topic because this crazy bastard wants to bring in Bobby Valentine to be an ambassador to a foreign country.

KFC covered it this morning, and I agree with his point that it’s not actually as crazy as it sounds, because Valentine’s kind of a big deal over there in Japan. That, and baseball in Japan is very cult-like, and Bobby V won a championship there as a manager, plus he invented the wrap. People don’t forget that, but he’ll remind you constantly as if they did.

As this news made the rounds, some very valid questions have been asked. Is this a joke? What the fuck is going on? How did we get to this point? What is the meaning of life? And, most importantly, will Kevin Youkilis be allowed in Japan if Bobby V becomes the ambassador? It’s a valid question. I have tried my best to erase the memory of the entire 2012 Boston Red Sox season from my brain through several years of alcohol abuse, but of the memories that I was unable to abolish, the relationship between Bobby V and Kevin Youkilis was one of them. As a refresher, here’s what went down.

“I think the comment I made early, he made a big issue out of, and I don’t think he ever wanted to get over it,” Valentine said in response to a question about Youkilis, who will return to Fenway Park on Monday as a member of the Chicago White Sox, the team to which he was traded June 24.

Valentine was alluding to a comment he made to WHDH-TV’s Joe Amorosino on April 15. “I don’t think he’s as physically or emotionally into the game as he has been in the past for some reason,” Valentine told Amorosino. Youkilis responded angrily the next day, meeting with both Valentine and Red Sox general manager Ben Cherington. “I’m more confused than anything, because I think everyone knows I go out and play the game as hard as I can,” Youkilis said at the time. But it was obvious the relationship never healed. Asked Sunday if it was strained, Valentine said, “I have no idea. It was whatever he wanted it to be.”

Youkilis, told of Valentine’s comments before Chicago’s game in Kansas City on Sunday, chose not to address them. “I got nothing about any of that stuff,” he said before a game against the Kansas City Royals. “I’m over all the Boston thing of this year. There is a lot of great past history, but the focus is on the White Sox.”

Valentine strongly disputed he had any problem with Youkilis in spring training, though he acknowledged he was aware that some teammates had issues with the infielder. “Yeah, I was aware of that,” Valentine said. Did the manager have concerns it could morph into a bigger problem? “Don’t know,” he said. “What’d you think? I inherited that situation. I didn’t cause it.”

“There were tons of things going around where guys had questions,” Youkilis said. Valentine, asked if he was aware that Youkilis was accused of being a snitch, gave a vague response. “I don’t know if I heard any of that stuff,” he said. But he blasted the notion that he and Youkilis had a falling out in spring training. “I think that’s a joke,” Valentine said. “I wasn’t here last year. There was no friction in spring training, so I think that’s a joke. I’ll take that.”

Asked if he was surprised that Youkilis appeared healthier, Valentine said, “Not surprised. As a matter of fact Maggs (hitting coach Dave Magadan) said he had no doubt if (Youkilis) went somewhere else he’d play better.”

The Bobby V experience in Boston was an unmitigated disaster. That was the most unlikeable team I’ve ever witnessed in all my years watching the Red Sox, and it all started roughly two weeks into the season when Valentine questioned the work ethic of the man who led the league in sweat, dirty jerseys, thrown helmets, and smashed bats, Kevin Youkilis. Can’t do that. He was probably just trying to light a fire under a team that shit the bed the year before, but you picked the wrong guy to make an example out of, and the wrong comment to accompany that player selection. There was no coming back from that.

Seems like Youk is still pissed about that whole ordeal, which I can totally understand. So, to answer the question, I’d say it’s a no on Japan, my man. At least not for another four years.