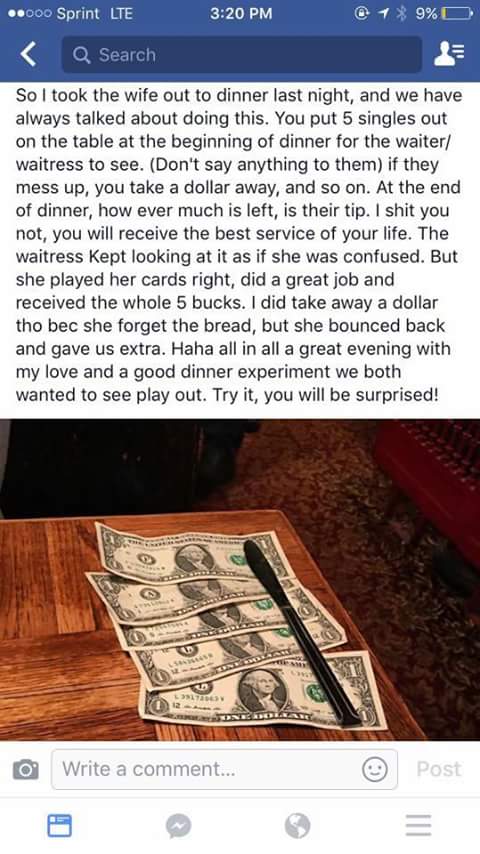 So I’m one of those people who’ll always err on the side of tipping more than less. I get the arguments about tipping and how it’s only enabling a broken system and also appreciate some restaurants that take the Japanese model of giving staff better salaries to keep customers from having to make the tipping decision. But even if you are tough on someone waiting on you, doing something like this is an unconscionable asshole move. Being a waiter or waitress fucking sucks. You deal with people who are often surly or dismissive or patronizing, you have to keep a smile on your face and make sure all the other moving pieces are working to keep the meal on point, and at the end your livelihood is out of your hands if the person you’ve been waiting on hand and foot decides they want to be a chiseler that day. Adding another layer of torture into that where you’re pulling away dollars of your already-shitty tip like you’re training a dog is just a scumbag move. If it were me, I’d not only ban any customer pulling that shit from my restaurant, I’d club them to death with a baguette in the name of everyone trying to make ends meet by bringing food and drinks to others. Respect the people who get you fat, drunk or laid, a man’s gotta have a code.

In the interest of fairness, this is the only acceptable time to be a shithead tipper…when you’re a character in a Tarantino movie going on a hell of a rant: