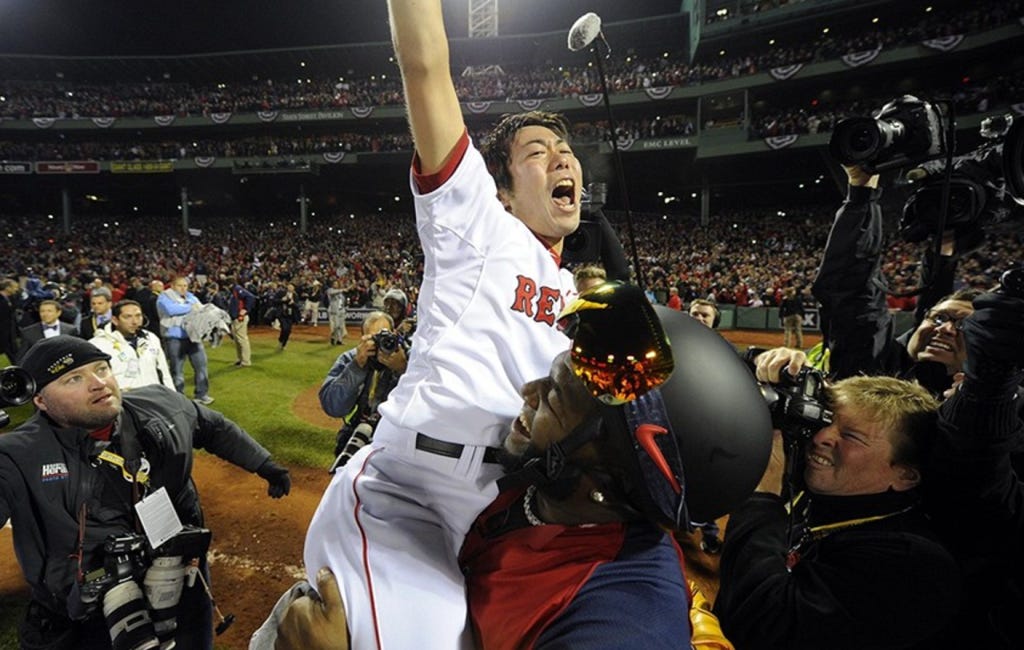 It’s crazy to think about now, considering how great of a reliever he is, but Koji was the third string closer that year. The Red Sox had to burn through Joel Hanrahan AND Andrew Bailey before they settled on Koji as their full-time closer in late June. But once he took over the ninth inning duties, it was game, set, match. From the point that Koji took over as closer in 2013, he appeared in 41 games, pitched 44.1 innings, struck out 59 batters, and recorded a ridiculous 0.41 ERA and 0.36 WHIP, while going 20-for-22 in save opportunities. He was about as automatic as they come, and that trend only continued throughout Boston’s championship run that October.

That postseason, Koji appeared in 13 of the 16 games that the Red Sox played en route to claiming their third World Series title in ten years. In his 13.2 innings that October, Koji struck out 16 batters, walked zero, and allowed just one earned run. That boils down to a 0.66 ERA and 0.51 WHIP, which also earned him ALCS MVP honors. Of those 16 strikeouts, the final strikeout just so happened to be the final out of the 2013 World Series, clinching Boston’s first World Series title at Fenway Park in 95 years.

But it wasn’t just in 2013 that Koji shined for Boston. Really, it was the entire time he was here. He just never really got enough credit outside of 2013, and I suspect there are a couple of reasons for that. One, the Red Sox were in last place the following two seasons, and nobody really cares about closing out games when the games don’t matter, and then you mix in the fact that he wasn’t Boston’s closer in 2016 when they were in first place again.

But the biggest reason, I think, is because of his velocity, or lack thereof. Everybody goes crazy for the closers that light up the radar gun, while the only year that Koji’s fastball averaged more than 89 MPH in Boston was 2013 (90.08 MPH). He didn’t need to blow hitters away, though. That’s how good his splitter was. And when his splitter was on, he could throw you an 88 MPH fastball up by your eyes, and you’d swing at it, thinking that it was coming in at 99 MPH.

Speaking of his splitter, since the start of the 2013 season, playoffs included, opponents have hit .164 with a .506 OPS when Koji threw a splitter, and he threw 1,778 of them. Also, since Koji joined the Red Sox in 2013, he has the lowest WHIP of any relief pitcher in the majors over that four-year span (0.81), and also issued the third fewest walks per nine innings (1.47), while accumulating the ninth lowest ERA (2.19), tied with Kenley Jansen, who will likely sign a free agent contract somewhere between $85-90 million this offseason. In his four years in Boston, Koji netted a grand total of $27.25 million. Saying that Koji was a steal for the Red Sox would be an understatement.

On Opening Day, Koji will turn 42 years old, so bless his heart for still doing his thing at the major league level, but he’s off to defend the Cubs‘ World Series title in Chicago. All of us here in Boston wish him nothing but the best, and he’ll always be a part of Boston lore as the man who recorded the final out of one of the most important championships in the history of our city.