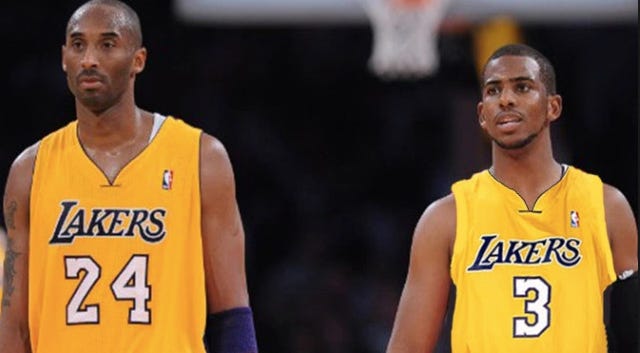 Five years ago today, David Stern did us all a favor, stepped in, and vetoed a trade between the Lakers and Hornets that would have brought CP3 to Lakerland. Thank fucking Jesus.

Here’s a quick backstory for those who may not know the situation, or simply forgot. In 2010 the NBA had to buy the Hornets owner George Shinn. They were coming off a pretty good year (46 wins), but fell in the first round against a team from LA, the Lakers (who would then be swept by the eventual champs Mavericks). At this point in his career Paul had established himself as one of, if not the best PG in the entire league. At 26, Paul was poised to enter the prime of his career playing for one of the most historic franchises in the league. This trade would have shifted things not only in the West, but the entire NBA. Here was the initial deal:

It’s no secret how much HOU had a hard on for Gasol, the Hornets were getting a young PG prospect who turned out to be pretty good, Kevin Martin who used to not be shitty, and a 1st rd pick. While not a terrible package, not exactly an unreal return. Had this trade gone through, this is your 2011 Lakers lineup: CP3/Kobe/Metta World Peace/Bynum and someone else they probably sign to play the four. Remember this was a time when Bynum and Metta were still serviceable NBA players. That Lakers team is good, real good most likely.

If this trade is allowed to go through, the Lakers don’t sign Nash the next season, probably don’t bring in Dwight either, and things are drastically different across the landscape of the NBA.

On no planet is that second offer a better deal. It wasn’t then, and it sure as shit isn’t now. To make the story that much sweeter apparently Dan Gilbert of the Cavs was the driving force behind pushing Stern to reject the deal, claiming it made the Lakers too good. What a little butthurt baby since this was still post Lebron leaving. This whole thing became an ordeal because the league was supposed to stay out of the team operations, that’s why they hired Dell Demps. But Stern gave the old “not so fast my friend” and broke that promise with this veto.

Paul would have been without a doubt the best guard Kobe ever played with, and the fact that instead of going to the Lakers he ended up in the same city, playing in the same arena, yet turned around the pathetic Clippers instead is something I think every Lakers hater can get behind.

David Stern did some shady shit during his tenure as commissioner, but I for one have absolutely no problem with this one. It is fun though to imagine “what if?” Perhaps CP3 would have one or more titles by now. Think of what that does for Kobe’s legacy, and Phil’s. I remember I was at a company holiday party when this all went down, and I can’t remember a time my emotions had a quicker 180.

So thank you David Stern, you sneaky bastard.