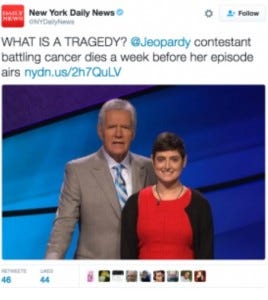 Cindy Stowell was a 41-year-old science content developer from Austin, Texas battling Stage-4 cancer when she fulfilled her dying wish to go on “Jeopardy!” Sadly, she died Monday, before she could see the episode, which will air next week.

So it was only fitting that such a touching story of courage in the face of mortality, the New York Daily News would do a nice, human interest story on Cindy’s journey. And promote it with a hilarious, Jeopardy-style answer on Twitter. Because you get it? She died. And it’s a tragedy. But she’s a Jeopardy contestant so you put in the form of a question! Get it? That’s the joke!

Right. Because the only proper way to Tweet out a link about a woman succumbing to cancer is with a David Caruso “CSI: Miami” pun.

How about we try it? I’ll take “Terminal Illness” for $200, Alex! Bwahaha! Or how about Looks like sarcoma and carcinoma were the “Deadly Double”! Rimshot!!! Wait. Wait … I got one. I guess someone got their final, “Final Jeopardy! Hey YOOOOO!!!

And the old school American press wonders why they’re swirling the drain and disrespected by everyone while Barstool is taking over the information universe. We’re a bunch of irresponsible, vulgarian slobs. But there’s not a man or woman among us who would’ve Tweeted this out.