Bruuuuuutal. I’m always nervous about playing in beer league games with a visor on because there’s always going to be that guy on the other team who just learned how to lift the puck off the ice last week and is going to drill you with a dump-in attempt. As somebody without dental insurance, I can’t afford that bender knocking out my front row of teeth. But this isn’t beer league. This is the NHL. Even if Roman Polak seems like he’d fit in better with your team than the Maple Leafs, he’s a profession hockey player. Leading me to believe there was some intent behind this clapper.

We knew when Dennis Wideman took out Don Henderson last season that there would be some copy cats. I just didn’t think it would ever come to this. NHL players using linesman for target practice. Do the zebras need some enforcers out there? I’d say Tim Peel is the closest thing they’ve got right now so they may want to work on cloning that son of a bitch. But for real… what a dick move from Polak whether he meant to drill the dude or not. You can tell nobody had confidence in him to dump that puck in cleanly judging by the reactions on the Minnesota bench. Just flip the puck in deep and let the boys go chasing after it. You try wrapping it around the boards like that against the Parise line and they take it down the other way on a 3-on-2 to stuff it down your throat. What a goon.

Speaking of the Wild… I hope all you kids at home are paying close attention to what Devan Dubnyk has been doing over the past couple seasons. 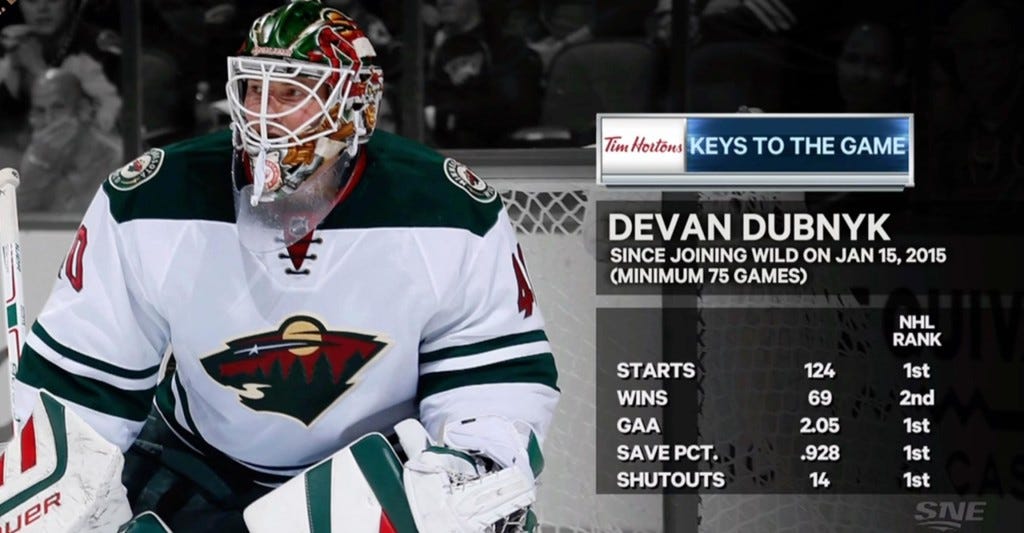 Still don’t think he has a good enough team in front of him to do anything with these stats. But what a career turnaround he’s been able to make since getting shipped off to Minny.

Elsewhere in hockey last night since apparently AHL clips aren’t considered blog worthy on their own…. here is the most beautiful saucer pass to clap bomb you’ll see in your life courtesy of the Grand Rapids Griffins.

It’ll get it’s well-deserved encore appearance next Monday on the Dangle Days Recap. But it was too beautiful to not include here today. Sauce So Hard.