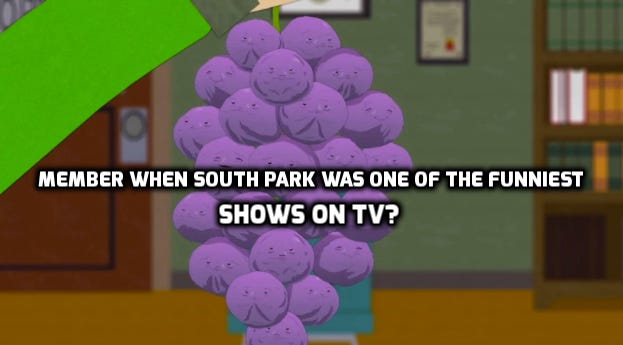 I think Trey Parker and Matt Stone are geniuses. I think that if you look at the breadth of what South Park has accomplished, 20 seasons on the air, mastering comedy ranging from slapstick to satire, becoming a cultural and even political force, it is hands-down one of the great TV comedies of all-time. I think it’s produced some of the funniest characters ever. I think it has pushed the boundaries of what comedy on TV can be in a way that puts it up with the Simpsons, Seinfeld, Daily Show and other groundbreaking shows.

Which is why, as a diehard fan, this season was incredibly and bitterly disappointing. There’s no other way to slice it. There is no spin zone. It was probably the worst of all of South Park’s 20 seasons, and we can all expect that the whispers that started coming during Season 19 that Matt and Trey have lost their fastball (save for that incredible premiere that debuted PC Principal) are only going to get louder.

While there were funny moments and lines in this season (Garrison/Trumps standup comedy routine stands out as the high point), it just didn’t seem to cut it compared to the consistent excellence we’ve come to expect of South Park. The list of reasons are long: Mrs. Garrison as Donald Trump didn’t deliver the way we wanted it to. The trolling storyline became tired. There wasn’t enough conflict between familiar characters and it relied too much on outsiders. The inevitable Cartman heel turn, when the other shoe would drop, the nice-guy façade would crash and he’d return to his usual, Hitler-y self, sort of just happened instead of coming with any sort of spectacular bang. The most memorable part of the season, the Memberberry storyline, didn’t really go anywhere and fizzled out. Danish accents stop becoming funny pretty quickly.

I found myself watching South Park every week just because it’s what I’ve always done, not necessarily because I wanted to. I found myself trying to convince my brain what I was watching was hysterical satirical genius because I wanted it so badly to be. I’m such a huge fan of the show and always will be, so I tried to will South Park into being in top form. It just wasn’t.

I’m not sure what’s going on with Trey and Matt. They had the formula. Create episodes every week on current events by the seat of their pants so they’re as cutting-edge and blisteringly funny as possible. No one could do it better than them. This new format the past two years of season-long storylines just doesn’t work as well. All the points, critiques and observations they made throughout the entire season would have, in the old South Park, been contained in a single episode. That made for so much wasted potential. I understand if the old schedule is too grueling for them now, or they want a creative change or want to try something different. That’s fine and their right to evolve as artists. But then we have every right as an audience to call it out if the product isn’t as good.

The most disappointing thing is that I felt like this was a time we needed South Park. With this fucked-up election, social tensions at the highest point that I and everyone else in the 9/11 Generation can remember, an effort from the extreme of both sides of the political spectrum to censor and silence comedy, I thought this season of South Park was teed up to be an all-timer. Every other fan of the show I know said the same. I thought that during this time when there’s so much bullshit coming from every direction, when it’s exhausting just to log on to social media or read the Internet for a couple of minutes, where it’s impossible to ignore or tune out real-life for just a couple of minutes, South Park would come through. It’d bring us huge laughs and devastating social critiques as the one show that truly can claim to call out both sides equally and fairly, and we’d get some sense of clarity along with being able to fall off our couches laughing. It was probably unfair for me to put all of that on to a TV show and set my expectations that high. But after that finale and season, I just can’t help but be disappointed.