So this gif from the Devils game has been posted a couple times, but nobody has officially ranked the drummers.  That’s what I’m here to do today.  So without further ado from worst to first.

I hate using the R word.  I’m on the record as saying if you call somebody a retard than you are an asshole. It’s my mythical line in the sand. However I don’t know how else to describe Brett here.  Just looks mentally challenged.  Bro who drums like this?   It looked like he was driving a car with his hands too close together.   Pathetic performance. 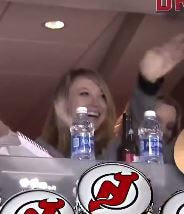 I’m not gonna lie.  I had no idea who this was when I first saw her and I’m still not 100% this is even her.   But whoever she is she sucks at drumming.  It looks like she’s Taylor Swift dancing at an awards show and that’s not a compliment.  Also who drums with open hands?  How do you hold the drumsticks like that?  And even if we suspend belief and assume she could hold the sticks like that they’d still never make contact with the drums in the first place.

Real herky jerky motion from Smitty.  Far superior than the bottom 2 drummers on this list, but he kind of drummed how an infant would didn’t understand how drums worked and just banged because they like loud noises.  Actually now that I think about it that actually seems like a perfect drumming style for Smitty.

I could see Connor griping with being #5 on this list.   He finished real strong, but the beginning was so weak I already wrote him off before he pulled out the late moves.   Controversial pick. Kinda like the Penn State of drummers.

Just really solid drumming from Riggs right from the jump.  I loved the little air move after 5 seconds of rapid fire drum roll.  And I’m not gonna lie his fucked up eyes are perfect for being a drummer.  Just a dude sitting in theback, looking crazy playing the sticks. 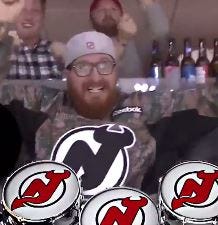 Really the only guy who looked like they knew what they were doing up there.  That he actually could have been playing a real set of drums.  In fact I’d be surprised if he actually hasn’t played a couple sets in his life.   A real renaissance man. 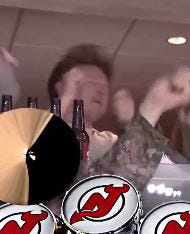 If there is one thing that Feitleberg has proven over the years it’s that he excels in situations like these.  He’s almost like a drama class kid.  The only person who involved the head in the drum routine like a true rock n roller.   Sure Chaps had better form, but performance wise it was all Lady Feitleberg.