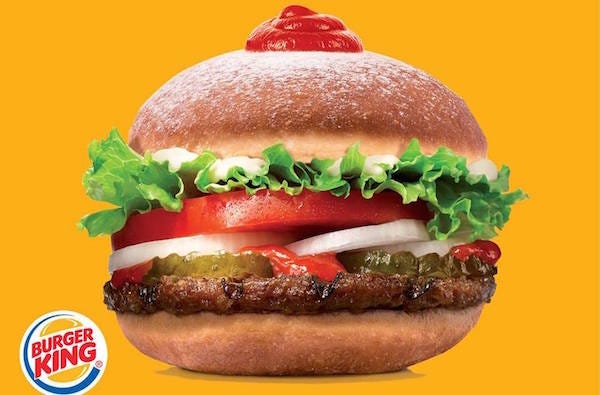 JTA- Burger King restaurants in Israel have introduced a doughnut burger for the Hanukkah season. The SufganiKing is a Whopper with savory doughnuts in place of buns. Its name is a play on the Hebrew word for doughnuts, sufganiyot, which are ubiquitous on every Israeli street corner in the weeks leading up to Hanukkah.

The burger “proves that miracles still happen,” Burger King Israel said in a Facebook post, a reference to the miracles at the heart of the holiday story. The SufganiKing will be sold for about $4. It will be available through Jan. 1, the last day of Hanukkah, according to reports.

What a move by BK and Israel trying to take back the throne from Mickey D’s and Christmas by aggressive, sugary force. As dirty a move as there is in fast food and religion. Sure it’s probably (definitely) trash, but I guess you need to pull desperate moves like this since Christmas has a one billion mile lead on Hanukkah when it comes to holiday power rankings. More gifts, better songs, and better food.

However I would be a hater if I didn’t acknowledge how awesome that ketchup yarmulke is. Swagger on a hundred, thousand, trillion. Throw some potato pancakes on the side, ship to to the U.S. and The Chosens at least have a meal that can lose 200-1 to the combo of Little Debbie’s Christmas cakes, candy canes, Santa Coke, and Hershey Kiss peanut butter cookies.