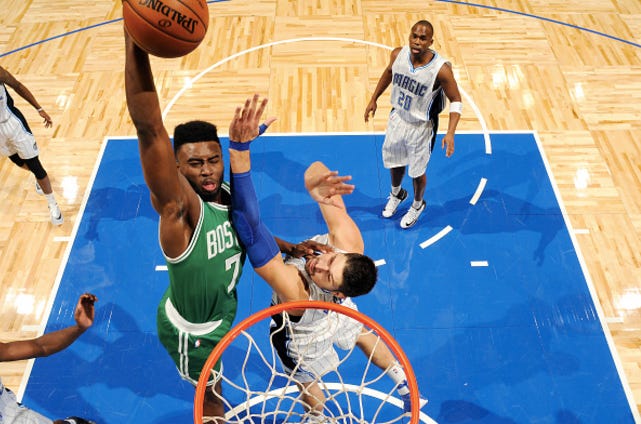 Sure, maybe it took over 20 games, but we finally got a complete 48 minute effort from our beloved Boston Celtics. It certainly helps that their opponent was the 10-12 Orlando Magic who were coming off a back to back, but they were playing well, winning four of their previous five, and history has shown the Celtics and Magic play each other pretty well.

Once word came out that Isaiah wasn’t playing (more on this later), there was reason to be both excited and terrified. Excited because this meant we probably were getting more Smart/Rozier running the point, but also terrifying because we were probably getting more Smart/Rozier at the point. The last game of a road trip, and with a much more important date with TOR on Friday, teams of Celtics past would probably not be focused for this game and drop it, ruining the momentum of what had been a pretty good trip.

Instead, they smashed. A 30 point win was just what the body needed after a heartbreaking loss on Monday, and after all the hoopla and all the panic about this Celtics team, there they are at 13-9 and just 1.5 games behind TOR (14-7) for that 2nd seed in the East. Weird what happens when you decide to not form complete assumptions a week into the season wouldn’t you say?

– If I told you that a guard from the Seattle area had a big night in a Celtics win, you might be thinking I mean Isaiah. Well, with his buddy down, Avery Bradley stepped it the fuck up. Not only did he play all 12 minutes in the first quarter, but he again showed by this name is Mr. First Quarter with a team leading 7 points and 3 assists. Immediately you could tell there was a difference in Avery’s style of play, he was much more aggressive than we usually see him with Isaiah in the lineup. King of the midrange jumper, he attacked the basket and probably had more drives in that one quarter than I’ve seen him take all year. I mean when was the last time you ever saw Avery drive hard to the basket, get fouled, not get the call, and be so mad about it he gets a tech? The answer is never.

A +24 on the night, his 23 points on 7-14 shooting (3-5) 4 rebounds and 3 assists were just what the doctor ordered. It was important for him to not disappear after a strong start, and he certainly didn’t. He played the most of any starter in this game, and continues to be one of the more underrated players in the entire league. A healthy Avery Bradley makes SUCH a difference for this team, on both ends.

As good as he was offensively, the defense is still what gives me a little Scalabrine in my pants, and in my opinion, this was peak Avery defense.

Watch how he gets run through multiple screens, stays with his man, and then the closing speed, ohhhhh man the closing speed to get to a position to block this shot was tremendous. You can’t hear it in the GIF but he gave a “GET THAT SHIT OUTTA HERE” for good measure. It was beautiful. Remember when Mazz said Avery hasn’t played defense in two years? People (me) don’t forget.

– You can’t win by 30 unless you play really well offensively (no duhhh), and it surprised me that without their best offensive player, the Celtics played great on that end of the floor. As you know we have a rule in this blog, when the Celtics shoot 51% for the game, we do not complain. The reason they were able to flourish like this offensively, was because of how fucking well they moved the ball. A total of 29 assists on 43 makes (67%) it wasn’t as if this was the best they’ve moved the ball all season, but think of how they started. The Celts started with 9 assists on their first 10 baskets. That’s called setting the tone.

With no Isaiah, everyone on this team had to be just a little bit better, a little more efficient on the offensive end, and they as a group rose to the challenge. The scoring was about as balanced as we’ve seen all season with seven players in double figures, and Olynyk right outside with 9. Four players had at least three assists, and when your lead by Al Horford’s 8, you know you’re moving the ball well. This was absolutely a welcomed sight.

– Let’s actually talk a little more about Horford because while his line wasn’t outrageous (10/6/8), his impact was tremendous. I would rather Horford have a night like this, than him drop 20/10 but the Celts lose any day of the week. A game high +31, things in this game swung because of the decision making of Horford out of the post, specifically in that third quarter. It’s unique that in a quarter where he only took 1 shot (and made it), that he would have such an impact, but it’s true.

I know I talk about it all the time, but with the game close at half, it was Horford’s patience in the post that truly allowed them to start to pull away. This type of passing out of the post is NOT something the Celtics had last year, and when you have a big that is this smart, and this unselfish, it shouldn’t surprise you when good things happen

Once upon a time Ibaka used to be a good defender, but Horford ran circles around him. When Horford turns and faces on his man, he becomes one of the most versatile big man in the league, and if you’re wondering why the Celtics found him so attractive, you’re seeing it.

– Was Jae Crowders 17/10 on 60% shooting the quietest 17/10 on 60% shooting in the history of basketball? I’m ready to declare his ankle injury 100% over because he is playing at the same level now as how he started the season, and that should excite you very much. My hope for Jae to take the next step was for him to turn into a 17-19 point scorer after averaging 14.2 last year. Since he got his conditioning right after coming back, he’s not only been around that area (and on good percentages), but the team is winning. I believe they call this an impact player, but I dunno

– Speaking of SFs, how about Jaylen!! After basically not really playing for the second half of November, Jaylen has seen a nice uptick in minutes here in December. His 22 minutes last night were his third highest of the season, and he’s been averaging around 18 minutes a game this road trip. Well, in this game, we got just enough of a glimpse to make us all feel much better. Seeing other rookies like Jamal Murray, Ingram, Saric etc play well was tough because as Celtics fans we weren’t given that same luxury with our young stud. I warned about this to start the year, that Jaylen’s situation was so different from the other rookies, it would be hard to judge them all the same. Well, in those 22 minutes Jaylen attacked, shot the ball well 5-8 (1-3) and gave us one of the best dunks of the season

I’m sorry, what were we talking about?

– Credit where credit is due, the Celtics backcourt needed to step it up with Isaiah out of the lineup, and step up did they ever. Both Marcus and Rozier played well, and when I said they needed to be efficient I am happy to report that I am pleasantly surprised.

Let’s start with Marcus. We all know about his shooting issues, and his extreme love for three pointers. Well, I’m proud of Marcus for only taking two, and he made one of them. That means 4 of his next makes came from doing something other than shooting a three. He only took 7 shots, and when you factor in the rebounding, assists, and defense, Smart was a more than adequate fill in with the starters.

Having said that, the story of the night for me is Terry Rozier. Up until this game Rozier had seen his minutes somewhat decline over the last handful of weeks. Well last night he got 26 minutes, which is more than Marcus. With those 26 minutes he did this

Everything you just saw in that clip should excite you. That crossover? Are you kidding with that? How about when he used it to free up his jumper at the top of the key? How about the aggressiveness that he showed attacking the rim not only off the dribble, but off the ball! Then also throw in his defense, and this type of performance is important for a couple reasons.

1) This type of play only helps you when it comes time to putting a package together for a player. Whether someone is interested in Rozier, or you now feel more confident getting rid of someone else because you feel you have something in Rozier, both are important.

2) The better he plays, the more cautious they can be with Isaiah’s injury.

– What if I told you the Celtics out rebounded the Magic 49-37. They owned the paint with a 58-26 advantage. Second chance points? Celts won that too 19-15. Oh and they turned it over less and got to the FT line more. They also fouled less. When I say they played a complete game, this is what a complete game looks like for future reference.

– Hard to imagine given the final score, but things were close for the first 24 minutes. Celtics again decided to start a game off by not defending the three, or really playing any defense at all. They allowed DJ Augustine to go off, which is frustrating, but the same could be said for Evan Fournier. We saw how good their perimeter defense can be later in this game, which is why it bothers me that they slack off to start these games.

– Of all the games to not have James Young active, a 30 point blowout sure does sting.

– Jordan Mickey only getting 1 minute of action? Those 3 second half Tyler Zeller minutes should have been his! Mickey had 4 points and 3 rbeounds in 1:47 of action. Unleash him!!

– It sounds like Isaiah’s groin injury is no joke, and word is he’s going to miss tomorrow versus TOR. That really sucks. Not only is this an important game for the Celtics, but Isaiah vs Lowry is usually great for anyone who loves watching basketball.

I’m with Ainge & Co though, you absolutely cannot risk it with groin injuries. Those linger, and Isaiah is TOO IMPORTANT. Give him as long as he takes to get to 100% and then give him a few games off in addition. I care about health in March/April, not December.

– On a night you win by 30, I usually skip this section. But, if one thing warrants it, it’s this.

I’ll admit, not having Isaiah for the upcoming stretch of TOR/OKC/SA/CHA does give me some concern, but if the Celtics play the way the did last night each of them is going to be a dogfight. I much like everyone else am waiting for the Celtics to beat a good team, and the rest of December provides an opportunity. But for now, we enjoy this win.