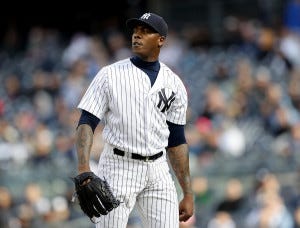 OXON HILL, Md. – The game’s hardest-throwing pitcher — and one of its more controversial figures — is back in the Bronx.

The Yankees and Aroldis Chapman agreed to a five-year, $86-million deal late Wednesday night, a source told NJ Advance Media. The source requested anonymity because the deal hadn’t yet been finalized.

Fox Sports’ Ken Rosenthal was the first to report the agreement.

Jut woke up to this news and this has to be what it feels like to wake up to nudes on snapchat, because I’m feeling the same excitement. The Yankees obviously still have a ton of holes to fill but this deal secures the back end of the bullpen and will definitely have us covered through our big free agent spending in 2018. With Chapman leading relievers in strikeouts since his debut and being near the top in many other categories, this acquisition was a no-brainer.

Betances has struggled in the 9th inning and with Chapman returning, Dellin can move back into the 8th inning with Tyler Clippard taking the 7th. This gets our starters back to only needing to find 6 inning leads to be able to leave the game in secure hands. At the same time his set-up leaves no doubt on who will be used in different situations, so Girardi won’t be put in the position to over-manage as often as he was last year.

Don’t get me wrong, the Yankees still have moves to make and to be honest will probably not be anything more than Wild Card contenders for the next 2 seasons, but this isn’t a bad team. Bad teams blow late leads and drive their fans nuts. Brian Cashman has built a team for 2017 that will still contend and win more games than they lose, while at the same time building a structure to contented on the free agent and trade markets over the next few seasons.

Sale makes the Red Sox a favorite in the AL right now, but the Yankees aren’t that far behind, with a big spending period coming up. No one does that better than New York.

PS: He was never charged with a crime.