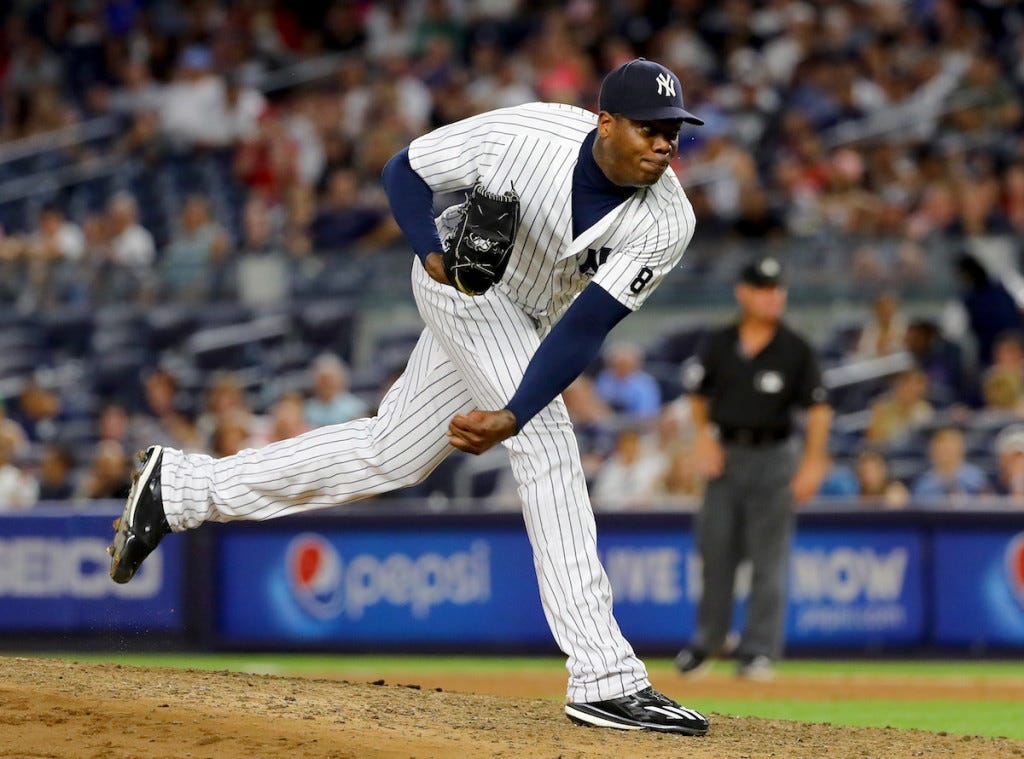 Ultimately, I think this is where everybody expected Aroldis Chapman to end up, back with the New York Yankees.

They were the team that took him in after his domestic violence suspension, when a lot of other teams didn’t want to touch him, and he obviously enjoyed his brief time there, because he’s headed back to the Bronx for the next five years on a deal that has set the new record for the most lucrative contract that a closer has ever reeled in, a total of $86 million and an average annual value of $17.2 million. It falls short of the $100 million that he was reportedly in search of, and it also falls just short of the $90 million that MLBTR predicted he’d land, but I’d say that a record deal, regardless, is a big win for Chapman. But more than anything, it’s a big win for the Yankees.

As far as what the Yankees are getting, they already know. He’s one of the most dominant relief pitchers in the game. But just in case you Yankee fans wanted some numbers to spout off at the water cooler on Thursday, here ya go. Since his first full season in the big leagues in 2011, Chapman leads all major league relievers with 617 strikeouts. Of the 91 relievers who have appeared in at least 250 games since 2011, Chapman’s 2.08 ERA is second to only Craig Kimbrel (1.94), and his 0.99 WHIP is sixth best in the majors over that six-year stretch. His 15.27 strikeouts per nine innings leads the majors over that span, as well.

Chapman’s return to the Bombers allows Dellin Betances to slide back into his role as a setup man, once again creating one of the most dominant one-two punches that any bullpen has to offer. But, as the Yankees learned in 2016, they’re going to have to bolster their rotation, because having a great bullpen doesn’t matter all that much when you don’t have a lead to turn over to them.