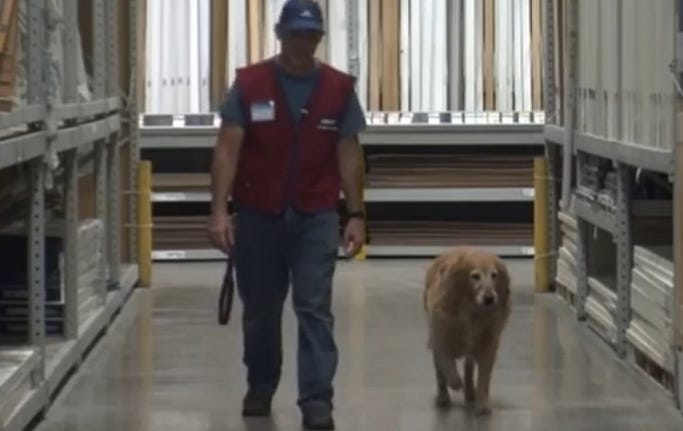 (CNN) –Getting a job these days is tough enough. Getting a job for you and your service animal? It’s as hard as it sounds. But Clay Luthy did it. Luthy, a disabled Air Force vet, had been struggling to find work since he needed his service animal, a dog named Charlotte, to be with him. But he got hired for a part-time job at a Lowe’s in Abilene, Texas. Hiring Luthy meant Lowe’s was also hiring Charlotte. “We were interviewing people for his position. And he was one of the applicants. And so he showed up for the interview and he had Charlotte with him,” Jay Fellers, a human resource manager at Lowes, told CNN affiliate KRBC. Luthy and his furry friend have been together for 10 years and working at the store for two months. Charlotte alerts Luthy and helps him calm down. “Instead of medications, I have Charlotte,” he said. Lowe’s often schedules Luthy to work in departments like paint, where Charlotte has a place to sit. Fellers said Charlotte — who wears her own Lowe’s vest while on duty — has been a hit with customers.

It is STUNNING to me that stories like this happen. I don’t know how many jobs Clay Luthy applied to before this one but the fact that he wasn’t given an opportunity at the very first one is incredible, for multiple reasons. First of all, you have just, you know, regular human decency. Someone fought for our country, saw unspeakable things, and came home with some demons. An adorable golden retriever relaxes those demons. That’s it. No medications, no substances, no nothing but a masterfully trained and remarkably cute dog is all he needs to feel safe. Instead of extending your hand with a kindness and helping a hero get used to life stateside, you tell him thanks but no thanks.

Next, you’ve got the whole Americans with Disabilities Act thing. Obviously, I’m sure those other companies found another reason to “go in another direction” but it’s pretty clear that Clay felt he wasn’t qualified because his dog, the one that makes him feel at home in the country he fought for, wasn’t welcome at work.

Finally, if things like “being a good person” and “the law” aren’t what inspire you to give a person a job, and I’m sure they’re not, how about this one? The outrageous free press and goodwill you get for going viral. That sounds bad to say, but most of these companies only speak bottom line. Well, nothing’s gonna make those profits skyrocket like Americans seeing a veteran treated decently and fairly. I mean this story is viral as fuck. Everyone’s talking about it and saying how great Lowe’s is. That picture of the dog? Advertisement fucking CITY.

So, like I said, I cannot believe things like this still happen. Give a veteran with a service dog a job. You support the troops, help those who fought for us, follow the law, and get monstrous free, and good, press, and your customers are going to be thrilled to get to see a cute puppy punching the clock. There’s literally no downside.