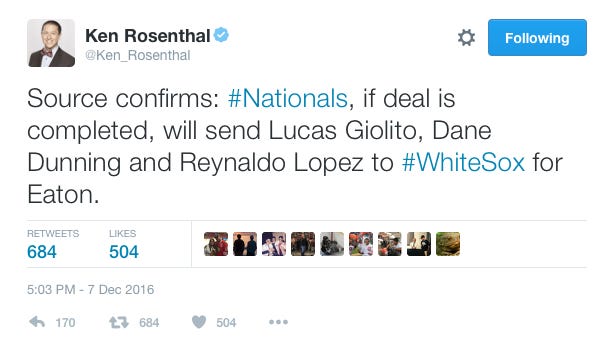 I’m gonna cut to the chase here… this trade was highway THIEVERY for reasons I’ll get into in am minute.  Real quick though – Adam Eaton is a very, very good baseball player.  He was worth 6 fWAR last season, has accumulated almost 14 fWAR over the last 3 seasons, and had he not had to move to CF where he struggles defensively, he could have very well won the Gold Glove, on top of his more than solid top of the order slash line of .284/.362 with 14 bombs from the lead off spot.  On top of that, he’s signed through potential 2021 for pennies on the dollar for a player who produces like he does at just $38MM total.  He will immensely improve Washington’s chances at winning now, which is obviously their goal with Harper about to up and bounce on them.  Though his “at a glance” stats aren’t too sexy, a player who possesses his surplus value and productivity is always gonna return a good haul in a trade.  The Nationals got themselves a great baseball player.

But that’s not what’s hilarious about this trade is I didn’t expect him to be traded at all, let alone for this kinda haul.  Here’s the timeline of Rick Hahn and Nat’s GM Mike Rizzo the last two days.  The Nats offered Giolito, Lopez, Dunning and Victor Roblez to the Sox for Sale.  Hahn has his pawns in the twittersphere float a few rumors out to idiots like me that the Nats and Sox are close on a deal for Sale.  Dave Dombroski says FUCK THAT and tosses them Moncada +++ for Sale.  And then we get to today, just 24 hours later – Rizzo whiffs on Sale, Cutch, etc. and flat out PANICS.  He says “okay we need to win now, here’s my offer for Eaton.”

and BAM… The Sox returned all of the guys they would have gotten for Sale anyways, sans Robles.  Masterful, masterful job by Hahn.  He flat out bent Rizzo and the Nationals over a hand rail these last few days.

So, here’s what the Sox farm rankings look like (via MLBpipeline.com) after the trades of Sale and Eaton:

and the third piece in the trade, not in the MLB Pipeline top 100, but who also grades as a mid-rotation start, Nationals’ 6th ranked prospect, Dane Dunning

* Note – Benintendi and Swanson will exhaust their prospect status almost immediately in the 2017 season, shifting everyone up

And the best part???

THE WHITE SOX STILL HAVE THE MOST COVETED PITCHING ASSET BY FAR (!!!) LEFT TO TRADE IN JOSE QUINTANA!!!  (Get me more bats please…)

Not to mention they can get a decent return on Abreu, Frazier, Robertson and Nate Jones as well.  If they burn it to the ground, I’m talking scorch this thing like fucking Hiroshima, the Sox will have the best farm system in the league and their might not be a close second.  They now possess the best position and pitching prospects in all of baseball.

As I said yesterday, there’s always risk when trading an established asset for what potential, but assuming these players pan out, they Sox 2018 Rotation is just about set with Rodon, Kopech, Giolito and Lopez.  That’s a rotation that can be scary, scary good.

This is the most excited I’ve been as a fan in forever.  It’s so goddamn refreshing.  Trade Q and now we’re cooking with gas.