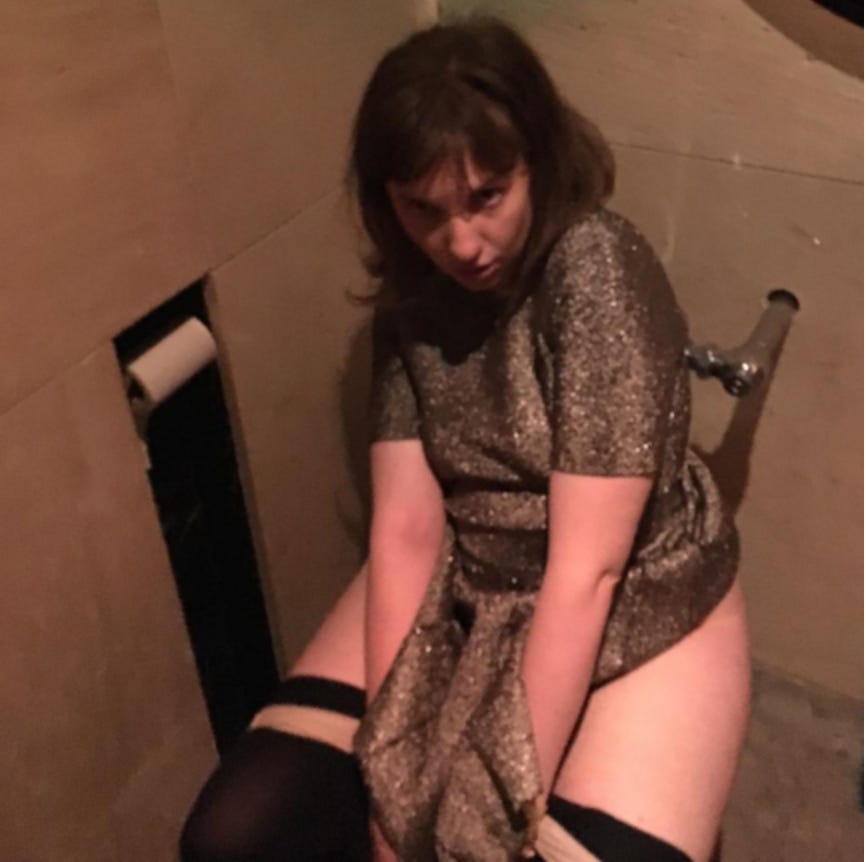 Heatstreet – Recently, Dunham posted a series of drunken video rants on Instagram, in which the raging feminist called herself as “a human wastebasket” and “wastoid” after drinking one and a half glasses of wine. She has attributed her begotten state to Hillary Clinton’s defeat in the general election.

Not quite sure what’s going on here. Lena is doing this new thing where she basically trashes on herself. Calling herself a human toilet and shit like that. Maybe she’s trying to B Rabbit the situation? Get out in front of all the insults before buffoons like me can say it to her. Next thing you know she’s gonna be posting instagrams saying she looks like a ball of fresh mozzarella that’s been floating in that murky milk water all day long. Officially take the mic out of Papa Doc’s hands. Well played, Lena. Our little dance continues.

Anyway as for this picture it’s absolutely abhorrent. Repugnant. And it’s shots like this where I ultimately have my biggest beef with her. You can’t post pictures like this and then complain about any of the feedback you get. ANY of it. This type of “humor” is bottom of the barrel. Lowest hanging fruit. If you want to go this route for cheap laughs and publicity, than just don’t be surprised when you get cheap feedback. Sitting on a toilet with your underwear around your knees intentionally looking as gross as you can is going to illicit the worst type of response on the internet. It’s going to be people calling you fat, people saying you’re disgusting, people questioning your talent, people saying you have no standards and will do anything to be famous. And if you can take all that nonsense, then great. Good for you. Go for it. But I don’t wanna hear about Safe Spaces and crying on the internet when that happens. You brought it on yourself posting gross pictures with pee pee jokes. You wanna scrape the bottom of the barrel for laughs, you’re gonna get bottom of the barrel trolls saying nasty shit.

I’m sure her whole point is that she’s at rock bottom and this is how she feels because Hillary lost and blah blah blah. But its also gonna be followed up eventually with some long blog post or interview where she complains about people being mean too. As always with her, cant have it both ways.