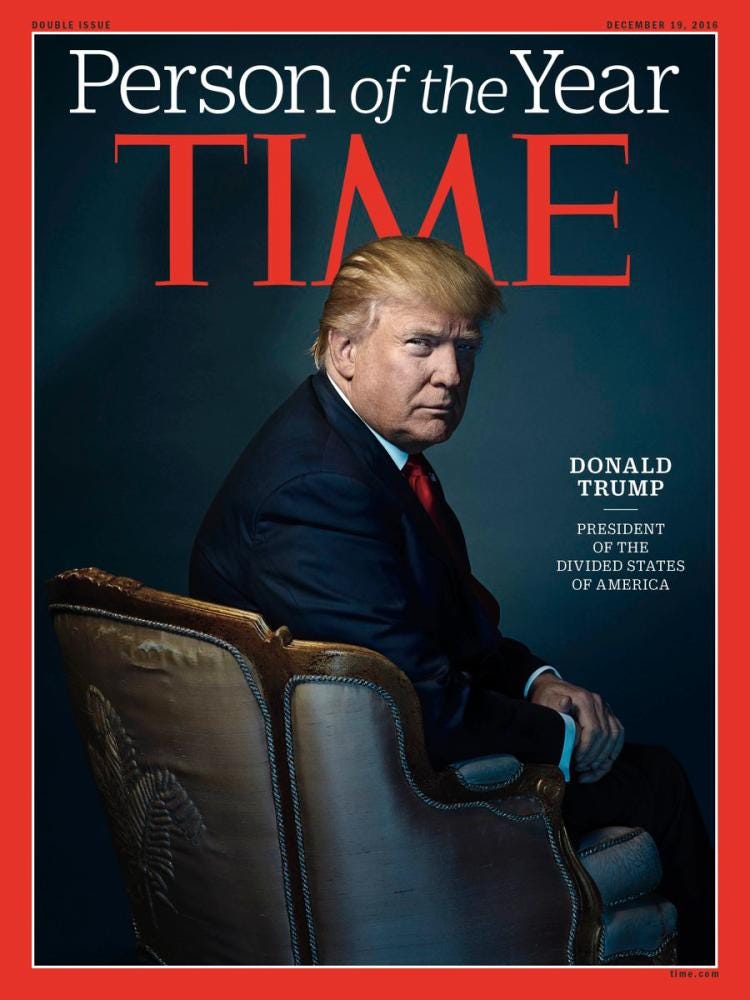 Pretty much impossible to argue any other candidate for Person of the Year. It was the Donald in an absolute landslide. I cant even think of another person who would even come close. The criteria for this distinction is for the individual who had the most influence on events, for better or worse. Its not the nicest person. Its not the person who is most popular or likable. Who influenced and changed this world more than anyone. In 2016 that is undoubtedly Donald Trump. The man completely flipped Americas political system on its head. Accomplished something nobody else ever has, reaching the highest office in this country with no prior experience. He rallied 60 million people who were sick and tired of the same old politics and threw the rulebook out the window. Beat The System and gave a voice to a shit ton of people who felt they were forgotten.

Now, whether or not he can follow through for these people and deliver on his promises and give those forgotten people the life they are looking for, that remains to be seen. Whether or not he carries out some of his pretty Anti-American ideologies, that remains to be seen.  But thats not what this award is about. Its about influencing this world. And when you add up all the headlines, and interviews, and discussions and internet domination along with the fact that he convinced this country to elect him its leader, I dont see how anybody else could have been named the most influential of the year. The President Elect is always going to be at the top of the list of candidates for Time, and there has never been one like Donald Trump. Its that rarity, polarization and ultimately success that has Donald on the front of that magazine cover.