(Source) — A gun-wielding Mannequin Challenge video led to the arrest of two men and the seizure of several firearms and marijuana at a north Alabama home. The video, which shows several people in still poses holding guns, led Madison County Sheriff’s investigators to serve a search warrant at 5012 Powell Drive N.W. in Huntsville around 5 a.m., said Capt. Mike Salomonsky. The video has been shared nearly 86,000 times since it was posted to Facebook on Nov. 9. Those arrested are Kenneth Fennell White, 49, and Terry Brown, 23. White is charged with first-degree possession of marijuana and possession of a firearm by a violent felon. He is being held in the Madison County Jail with bail set at $30,000. Brown is charged with possession of drug paraphernalia and loitering. Once he was taken to the jail, authorities found marijuana in his possession and added a charge of promoting prison contraband. His bail is set at $3,800. Two handguns, an assault rifle and a shotgun, along with several rounds of ammunition and magazines were seized at the home, Salomonsky said. Investigators also discovered several bags of marijuana that were packaged for resale along with scales and a device used for grinding the drug.

I know it’s 2016, I know the ultimate goal in life isn’t success or riches or even happiness, it’s to go viral just once. But maybe… I don’t know, maybe not the best idea to try and accomplish that goal in front of the trap house? I know a thing or two about drug dealing (I’ve seen R-rated movies, not to brag) and they’re often quite secretive. Burner phones, secret knocks, killing snitches with loose lips, all kinds of stuff like that. They do their very best to remain anonymous and under the radar, that’s like the number one step in successful drug dealing. Don’t believe me? Give Biggie’s Ten Crack Commandments a spin, “Rule nombre uno: never let know where your house, handguns, assault rifles, shotguns, ammo, mags, drugs, scales, and grinders are at by posting a stupid viral video on Facebook to see how many likes you get.” Look it up, that’s what he says. You gotta listen backwards, like finding the Satanic message in “Stairway to Heaven,” but that’s exactly what he says. If you fail rule nombre uno then you deserve to get arrested. In fact, if you’re doing mannequin challenges then you deserve to get arrested. So this is just a feelgood story about justice here.

PS – Hey dude, get off the phone! You’re in the middle of an intense drive-by shootout, the likes of which I haven’t scene since Victor Sweet’s gang rolled up on Marky Mark and his three brothers in the classic 2005, “Four Brothers.” Tell your girl you’ll call her back. 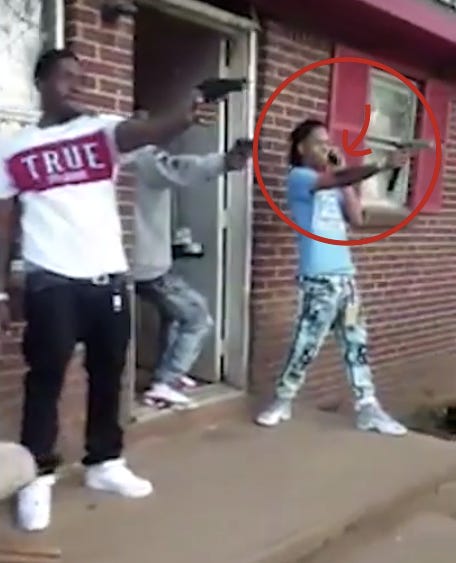