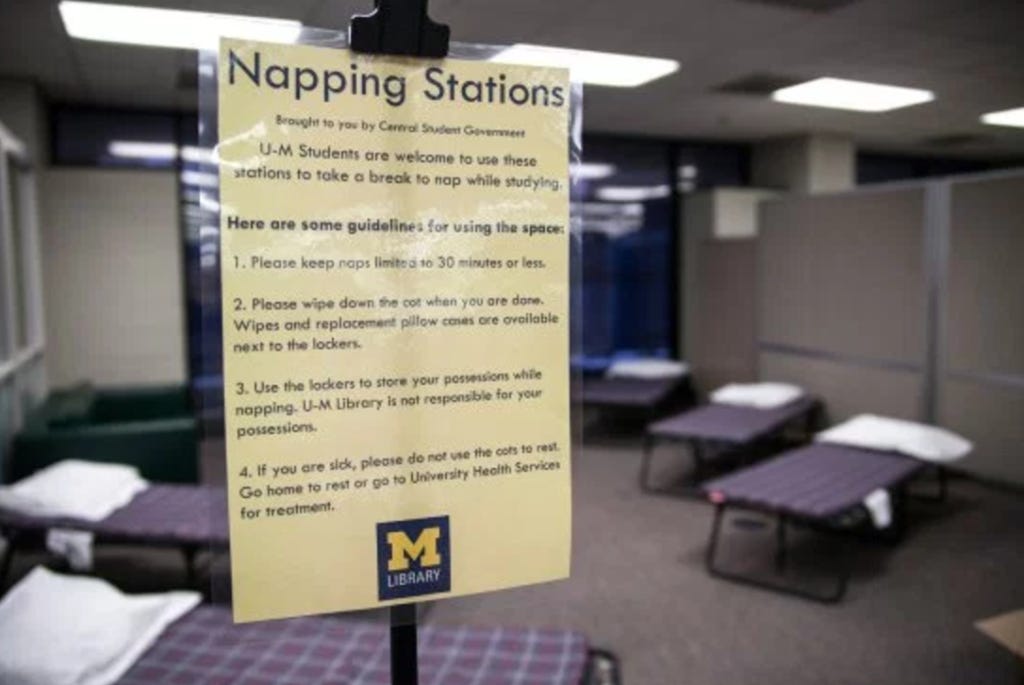 DBK News - The mid-afternoon crash hits, and the coffee just isn’t cutting it. There’s no time to make it back to the dorm or apartment for quick nap until after evening classes.

The solution may be a campus “napping station.” The Student Government Association will revisit a bill next semester that, if passed, would support a pilot program for this type of facility in Stamp Student Union.

Students who live off the campus are at a disadvantage if they need to take a nap during the day but cannot head home, said Coello, a commuter and a freshman engineering major. A.J. Pruitt, SGA vice president of student affairs, said students who rely on public transportation schedules have limited opportunities for midday rest.

The program would limit students to 30-minute naps. SGA’s Committees on Student Affairs and Health and Wellness are still discussing other details, Pruitt said.

The University of Michigan implemented napping stations in campus libraries in 2014. Michigan’s stations also limit nappers to 30 minutes. James Madison University runs a similar room in its student center, and the University of Colorado Boulder sponsored one from 2009 to 2011 but discontinued it after lack of use.

I’m the biggest nap guy I know. I love naps. I live for naps. Napping is like my family. During college, there was nothing better than the mid-day nap. When working from home was a thing for the last 3 years until Dave sold out, there was no better feeling than banging out a few blogs, scheduling them, and then shutting them eyes on the couch for a quick slumber. So in theory, I am all about college nap stations. But in practice, they just sound fucking gross.

Look at those cots offered at Michigan. Who the fuck would sleep there? Your head 10 inches away from someone else? All snoring and tossing and turning, lights beaming into your eyes. 18 year old boys getting untimely erections if the wind hits them the right way. That is no way to nap. That is a slap in the face to nap culture. Don’t be appropriating nap culture like that. It looks like prison.

And a 30 minute time limit for naps is horseshit. I don’t decide the length of my naps, my naps decide the length of me. What if a student has 2 hours between classes and wants to snooze for the majority of that? They are expected to set an alarm…which then wakes up every other napper? That is no way to live life. Quite literally the worst napping situation I’ve ever heard of.

So while I commend Maryland for taking an innovative approach into solving the napping problem at the University, I believe they need to really think this one through to make sure it’s done correctly and with the professionalism and respect to the napping game it deserves.