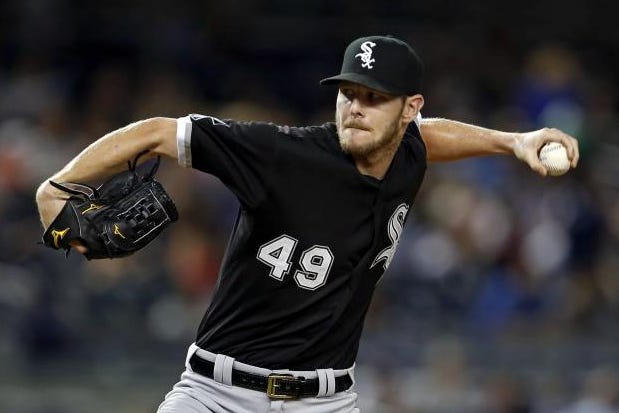 I want to give a big ol FUCK YOU to the Chicago White Sox for wasting the prime of the best pitcher in franchise’s history.  I won’t say anything else, but the fact that Chris Sale, with his productivity and his contract had to be traded to *hopefully* be good again in 2-3 years makes me wanna puke.

Anyways, let’s break down this trade.  The White Sox and the Red Sox have been a match made in heaven for the better part of 2 seasons, even after Boston signed David Price to a massive contract prior to the 2016 season.  It’s simple; Boston is ready to win World Series now with a core of Betts, Boegarts, and so on.  What they needed was a stopper.  A grade a bona fide ace to pair with Price.  And that’s what they got with Chris Sale.  Even though Porcello had a great year in 2016, my eyes lead me to believe that there will be regression.  Perhaps not much, but he’ll never win a Cy Young again.  Ever.  He had the best run support in baseball by .7 runs a game in 2016, as Boston scored 7.6 runs/ game for him.  That, and his BABIP was 40 points lower than his career average of .306 and his LOB% was up a tick to about 75% from a career average of 69%.  Couple (my) expected regression from Porcello, a power pitcher in David Price on the wrong side of 30 who can’t win in big games, a knuckle baller, a young (but very promising) E Rod and a depth arm in Pomeranz and it was a no brainer for the Red Sox to ante up for Sale.

What the Sox need is organizational depth. A SHIT TON of it. The Sox lost a LOT of compensation picks over the years after signing Dunn, Robertson (I think, this is off the top of my head) and until Anderson and Rodon, had a bunch of 1st and 2nd round busts for draft picks.  Their farm depth was thin until Nick Hostetler took over the scouting department and reengineered how the team scouts.  With Boston’s return, it’s injected with players who project to be upper-echelon players. 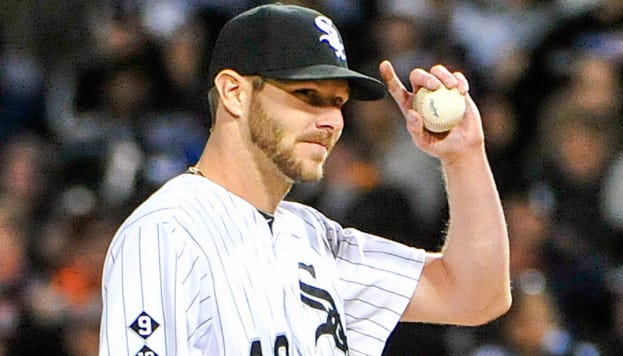 Chris Sale needs no introduction.  He’s a top 5 pitcher in baseball.  His shit is second to none, has the All Star appearances and the Cy Young votes and yada yada yada.  Simply put, he’s the best.  I love him.  I will always love Chris Sale.  Him and Frank Thomas are my two favorite athletes ever.  I hope he eventually wins a Cy Young and World Series and winds up in the Hall. That said, this move doesn’t come without risk for Boston, either.

Chris Sale has a very unorthodox delivery and baseball people have projected him to break down for years.  This will make or break the deal for the Red Sox.  The White Sox keep players off the disabled list better than any team in baseball – their training staff, led by Herm Schneider works wonders keeping pitchers healthy.  Sale will no longer have access to Herm’s magic, so we’ll see if he starts to break down because of it.  He’s entering his age 28 season, which is an age where pitchers with mechanics like that who throw 95 start to break down.  That is Boston’s #1 risk in this deal.

Now, it goes without say – though they lost Ortiz, the Red Sox probably have the most balanced team in the American league.  I would imagine they’ll be the odds on favorite to win the AL pennant this season, even before Cleveland who returns two of their best players from injury.  That’s the give and take the Red Sox are making with this trade; sacrifice prospects (we’ll get to why that’s bolded later) for an opportunity to win now before Betts, Boegarts are extrended and before Pedroia enters his decline and it took mortgaging the consensus best prospect in baseball to do so. 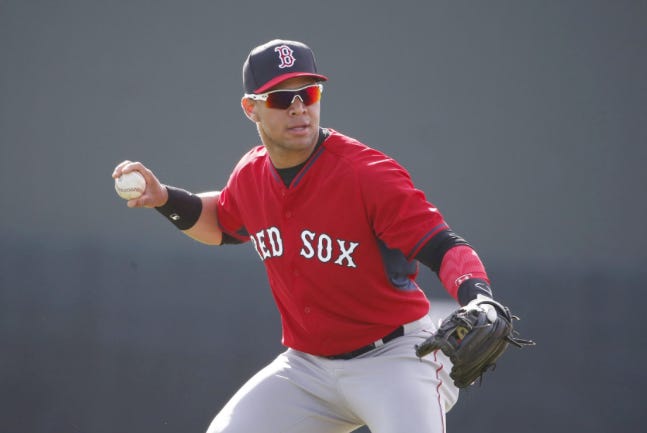 Still think this was light and the Sox coulda held out for a Sam Travis or someone, but fuck it.  I probably was overvaluing Sale just like seemingly everyone overvalues prospects.

Moncada is obviously the headliner.  He’s ranked as the #1 prospect in baseball by both Baseball America and MLB Pipeline.  The Cuban transplant signed for about a $30MMsigning bonus, and Boston had to pay a $30MM tax because of it.  They really, really liked this kid.  As they should.  His tools are on another planet.  Here are his MLB Pipeline scouting grades:

He projects as a Robinson Cano type player.  Again, keyword is projects.  Here’s a little breakdown of his swing from both the left and right side (switch hitter).   I’m going to keep this as short as possible while at the same time being as in depth as possible.  It’s not me copy and pasting ESPN or Fangraph articles, giving a ‘take’ on it, and then adding on base and slugging percentages to get an OPS.  Any asshole can do that.  It’s me getting really baseball-y.  Have a watch at the video below:

From the left side, his swing plane is great.  It’s short, level through the zone, and his hands are explosively fast.  There’s not a ton of excess movement either; it’s simple and to the point.  No hitch, a light to tap into loading position.  Once loaded his momentum is linear and to the pitcher.  There isn’t much rotation in his swing; it’s short, compact and to the point.  Once his pitch recognition against major league pitching develops he’ll make consistent, hard contact from gap to gap, and with his strength and bat plane, will eventually develop into a 25ish/ year home run threat as well.

To nit-pick a bit, when he’s making contact in these videos, his plant foot tends to spin on its heel.  This can cause major problems with a hitter’s balance, which leads to head movement, which leads to eyes moving up, down all around, which leads to hitters swinging through pitches, which leads to strike outs.  This, along with elementary pitch recognition so far in both MiLB and The Show, can explain his 30% K rate over the 2016 season.  It’s not necessarily an easy fix, because it’s obviously ingrained in his muscle memory, but an off season with a focus on it can help his contact rate pretty immensely I’d bet.

Now from the right side – in my opinion it’s pretty ugly.  The best switch hitters are mirror images of themselves from each side of the plate.  Moncada is not.  His swing is stiff, kinda long, and rotational.  His head dives towards home plate while at the same time is jumping all over the place and he’s pulling off the ball badly. When he makes contact from the right side, I’d expect a ton of roll over ground balls to 3B, a lot of swings and misses and pop outs.  You can tell it’s unnatural to him at this point.  I wouldn’t be surprised if he puts the kibosh on switch hitting eventually.  We’ll see how he progresses this winter.

Other than that, he’s fast as shit.   Could peak out at as a 30/30 player (that’d be fucking sick), but a reasonable expectation is 20/20 from 2B.  He apparently possesses great instincts as a fielder, but sometimes has trouble making the routine play.   Once he’s established in the league, watching him and Timmy Anderson turn two up the middle will be a thing of beauty

All of this is just pure conjecture though; the best prospects fizzle out allllll the time.  Jay Bruce, Matt Wieters, Byron Buxton and Jurickson Profar were all #1 overall prospects in the last 8 years.  They’re all bums.  Gordon Beckham is another guy who was top 10ish who we all though was gonna hit 25 bombs, .300/.375 for years to come. While Moncada has a chance to be great, it’s not a sure thing.  Nothing ever is in baseball.  The Red Sox were trading for a right now sure thing; the White Sox were trading for a package of what they hope to be sure things.  And guess what? Prospects will break your heart.  Hopefully Moncada turns into the HOFer Red Sox fans guaranteed me he was going to be, but for now let’s temper our expectations and let him get his feet wet.

This blog has been long as fuck.  I’m going to break down the supplementary piece in the deal, Michael Kopech tonight.   All in all – it is a good trade.  No team got fleeced.  The Sox got their MLB ready-ish guy, and Boston is better right now.  I would have liked just oneeeeee more piece, but beggars can’t be choosers.  What Hahn should do now is go to Washington and say, “Hey, you know what you offered us for Sale?  Sorry, he’s already traded to Boston, but we have this guy named Quintana and we’ll take that package for him.”

Really weird time.  I’m gonna miss the FUCK out of Sale.  Keep the ball rolling, Rick.  The South Siders can have the best farm system in baseball by the end of this week with just another trade or two.