The Philadelphia Flyers are currently in the midst of a 5-game winning streak. But you and I both know that eventually, this team will come back to reality and go on a losing streak sooner or later. So what better way to drink your sports sorrows away than with some “Ghost Bear” Golden Ale courtesy of the good people over at Conshy Brewing? Could they have made it a little stronger since Philly sports drives us all toward alcoholism? Surely. I think maybe a 5.3% would have been a nice touch. But that’s besides the point. Because in just his 2nd year as a Flyers, Ghost Bear has already received the highest honor that any Philly athlete can receive; becoming an alcoholic beverage.

I don’t see Erik Karlsson having his own beer anywhere. Or Duncan Keith. Or Drew Doughty. Or Brent Burns even though I’m sure Brent Burns probably distills his own whisky. The fact of the matter here is that Shayne Gostisbehere is asserting his dominance on the blue line across the league right now. He may not be having an incredible season as far as stats are concerned, but the Ghost Bear Golden Ale has to count for something. And the best way to enjoy an ice cold Ghost Bear Golden Ale beer? By pairing it with your very own Ghost Bear shirt. BUY ONE NOW!!!! 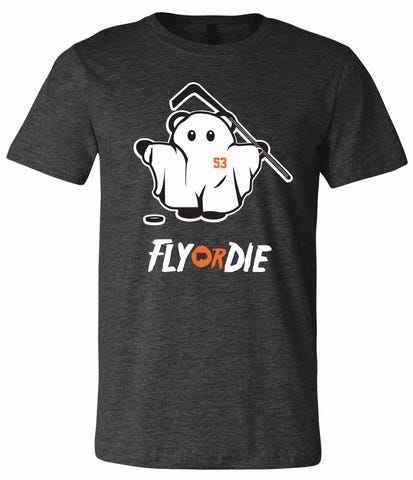