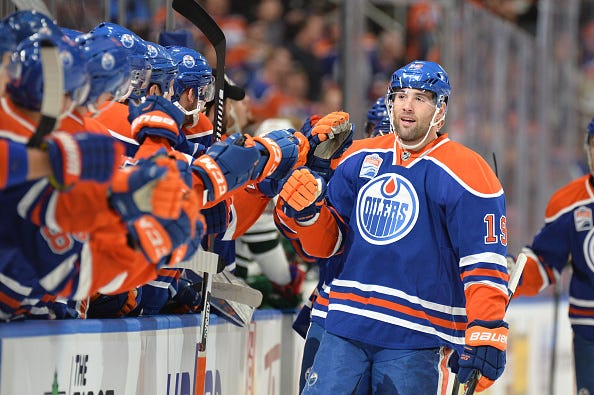 Former Philadelphia/Adirondack Phantoms legend Pat Maroon now plays for the Edmonton Oilers. He’s the definition of a grinder. You can usually tell the heart players from the crowd because their equipment doesn’t match. Bauer gloves, skates and stick, but a CCM bucket? That’s a guy who worries more about what he’s got on the inside as opposed to what he’s wearing on the outside. That’s besides the point. Because right now he’s managed to get Hockey Twitter all riled up (which isn’t exactly hard to do) after his comments on Sunday night on this incident that resulted in Connor McDavid getting pulled from the game by concussion spotters.

Connor McDavid is the future of the NHL so I really don’t have any issues with concussion spotters being a little more cautious when it comes to incidents involving him. Think about how many games Sidney Crosby has missed in his career already due to concussion symptoms. Last thing the league needs is for McDavid to go down the same path. With that being said… McDavid is a competitor, felt completely fine after smacking his mouth on the ice and didn’t want to be taken out of a 1-1 game. Here’s how Pat Maroon described the situation and ipso-facto got the entire hockey community’s panties in a bunch.

CBC – “This is a man’s game,” Maroon said after the game. “People are going to get hit, get high-sticked. They’re going to go through the middle and get hit. That’s part of hockey, and that’s why we have all this gear that protects us.

“Yes, if someone gets seriously hurt, we’re concerned. But he just fell, got tripped … I just don’t get it.” He repeated once more: “It’s a man’s game.”

In this day and age, any time an athlete opens their mouth they are walking through a minefield with DOZENS of people on the internet ready to get outraged at their every word. And there’s no better way to get on the outrage crowd’s bad side quicker than bringing gender into the equation. It’s bullshit but I get it. I understand what these assholes are talking about. Being able to tolerate pain isn’t something that is inherently masculine. But it’s not like Pat Maroon went out to make this comment specifically to say women can’t tolerate pain. It’s not like he is going out of his way to say that women can’t play hockey. Or that you’re not a real man until you smack your face on the ice and play through the pain. It was an offhand remark that was maybe a little poorly worded, but there was no malicious intent behind it. But then when he goes to defend/explain himself…. 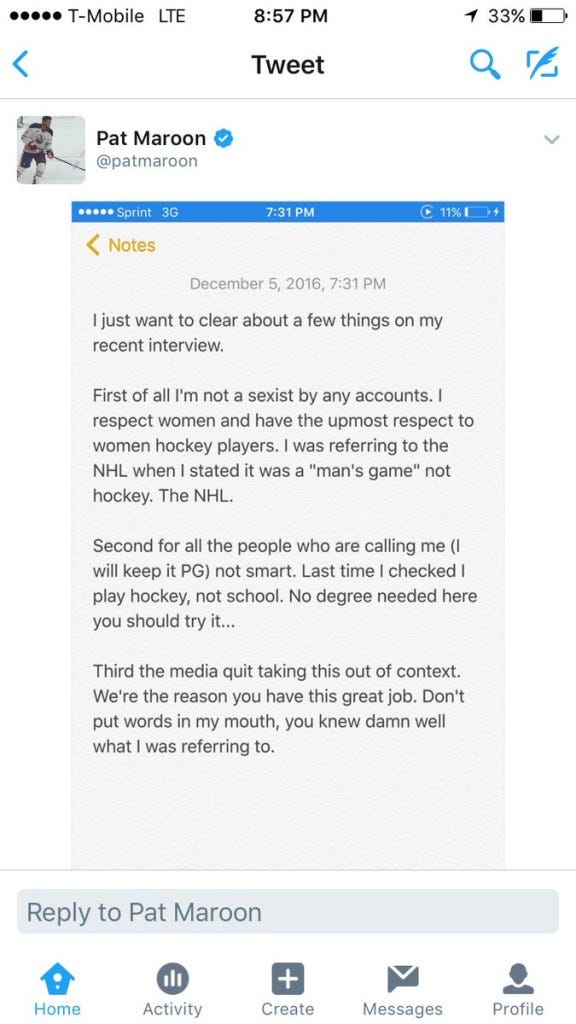 He gets ripped even more. Which sucks. You make one poorly worded remark and all of a sudden you’re labeled this sexist pig who thinks women are second class citizens or some shit. You can’t expect Pat Maroon to be this eloquent speaker who is fully aware of today’s social climate at all times. (Quick Sidenote: “Last time I checked I play hockey, not school” is an all time quote. And I can’t imagine he knowingly ripped that from Cardale Jones. This is just a case of great minds thinking alike). But that doesn’t mean that he’s some casual sexist. He’s just a guy who is going to tell you how it is. And how it is, is that the NHL is an all-male league. I’m sure that if he has a daughter who wants to become the first female to play in the NHL, he’ll do whatever he can to help her reach that dream. But for the time being, the NHL is a man’s game. Not because women or transgender or whoever can’t play hockey. But because there are 30 teams in the NHL with 23-man active rosters and all of those rosters are comprised of men. That’s not a sexist thing to say, it’s a factual thing to say.

Lastly–nothing is worse than Hockey Twitter’s war against playing through injuries. These guys are all adults who are capable of making decisions for themselves. They laugh and scoff at anybody who applauds players for staying in the game after getting hurt. And I’m not saying that guys who are clearly concussed should head back onto the ice to get their brains mashed into applesauce even further. But they aren’t delicate little snowflakes. I know that playing through pain doesn’t show up on their little computers and algorithms. I know the calculator boys in the hockey world don’t have a stat for that kind of thing. But it’s something that the rest of the team responds to and it’s energy that they can feed off of. It’s a warrior’s game. I’m sure that people who don’t identify as warriors will get offended by that statement, but I’m pretty sure that’s what Pat Maroon was trying to convey. And he’s not wrong.