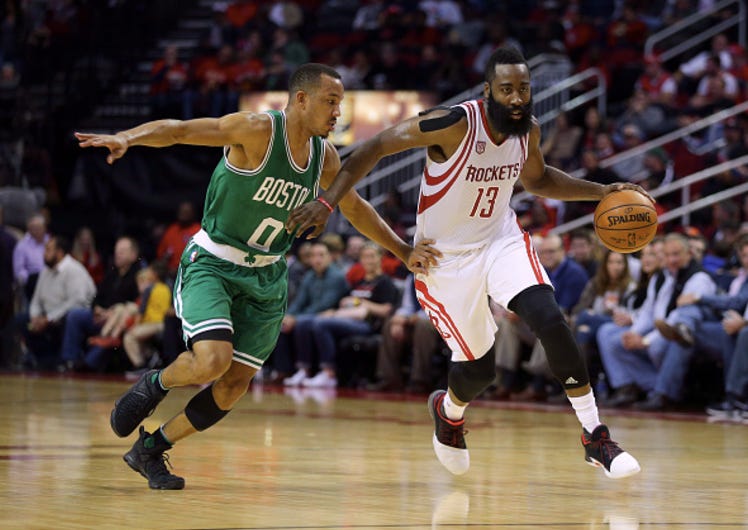 Layups are hard, everybody knows that. I just want to get that out of the way first. Last night the Celtics had every opportunity to get a great road win against a pretty good HOU team, and much like their road game against SA during Thanksgiving weekend, they are instead left with a “moral victory”. That fucking sucks. For me, this one hurt a little more than the SA loss because the Celtics had not one, but two chances in the final 10 seconds to win this game, and our two best players both missed layups. Now before we go any further there are a couple of ground rules that I am setting.

1. I will in no way tolerate conversations around “See this is why they don’t have a superstar and can’t ever win with this roster”

2. Horford is a bust

I think it is totally acceptable to be angry about this loss, but try and take a couple deep breathes. Players miss game easy winning shots all the time.

That’s just basketball, shit happens. Had Horford or Isaiah made that layup, the narrative about this team is probably different, and that bothers me. Remember that game winner against DET? Or how huge he was against SAC and Boogie? One missed shot does not ruin his entire body of work thus far. It just really sucks.

But there was also some positives to take away from this game, so we might as well get started.

– You know what, let’s start with Al because guess what, without his 21/6/9/2 the Celtics are not even in this game to begin with. After all the complaining about Horford not getting enough shots, I didn’t hate his 22 attempts which were a season high. What we’re seeing with Horford offensively that really gives the Celtics something they didn’t have before he got here, is how he works in the post.

I can’t deny it, I absolutely LOVE when Horford turns and faces his player in the post. Whenever I see him do this I am about 97% confident that something good is going to happen. Just thinking of all his options makes me feel all warm and fuzzy. He can pass out of the post, he can take a jumper over you, and then he can also put the ball on the floor and attack the rim. These are all very valuable skills. We got our first glimpse literally on the Celts second basket of the game

Not only does Horford start some beautiful ball movement, but then once the ball works its way back to him, he kills Capella with the face up jumper. I’m not sure I saw this come from Sullinger but I could be wrong.

Also let’s not forget how important Horford was to the huge third quarter run. His 7 points and 4 assists in just 8:35 were absolutely instrumental in the Celtics comeback.

– For a majority of his career, I’d say the talent of Avery Bradley has been underappreciated. People who don’t really watch just call him a defensive specialist, and really he is so much more. Yes, he does play All NBA defense, but this season we’ve seen him grow in a number of different areas. Last night marked the fourth time in six games that Avery has shot 50% or better from the field, and in one of the games he didn’t, he shot 46%. A small sample size yes, but so far in December he’s putting up a beyond solid 17/9 on 51% shooting. Looking at the entire season it’s 17/8 with 47/39% splits. He’s taking and making more shots than he ever has before in his career. Another double double in this game, his rebounding is so impressive it is now a law that I mention it whenever it happens.

Remember when people were mad about his 4/32M contract? Those were funny times.

– Hey I knew when I laid eyes on Terry Rozier this summer that things were going to be different this year. It’s why we fell so hard for him after he hit that game winner to win the Utah Summer league. But, not even I could have seen this sort of development. Terry Rozier is getting his opportunity, and all I can say after watching his 13 minutes is he is finally starting to figure out how to play at the NBA level. We saw what Terry looks like when he plays under control, and it’s scary. Sure maybe the jump shot still needs work, that’s OK, because I care more about how he runs this team as a PG. Well,

As impressive as he was early, Rozier really stood out to me in that fourth quarter. See Isaiah had played 10 of the 12 minutes in the third so it was up to Rozier to keep the momentum going once they reached the final frame. Everyone knew Isaiah wasn’t going to come back until around the 7 or so minute mark, and it was great to see Rozier come in and not shit the bed. His 4 points 2 rebounds and 2 assists in those 8 fourth quarter minutes were huge, and it allowed Isaiah to get some much needed rest.

– How about Jonas Jerebko! Reports of his being dead after Saric’s crossover seem to be incorrect! In his first start of the season, Jerebko lead the team in +/-, hit a couple threes, and overall played pretty well. He had some issues defensively, he got burned baseline once or twice, but all in all I’d say this lineup change from Brad worked out. Jerebko has long said he wants to start, and performances like this will certainly make Brad think.

– It sucks it was wasted, but the second unit actually came through again which is a pleasant surprise. Marcus did Marcus things, flopping included, Kelly was OK in his 15 minutes (7/5), and as a unit everyone shot the ball at a decent clip, which is rare for this group.

– The best part of that second unit? Jaylen Brown showed life!! His form looked great on that made three in the first quarter, he got out in transition and scored off turnovers which has always been my dream for him, and better yet, his defense was good!

I especially enjoyed this defensive possession for Jaylen early in the second quarter.

– Another first quarter that blows, another opportunity for the Theory to flourish, and as it usually does, it came through. I knew once that first quarter ended and the Celts had 17 points on 32% shooting that the third quarter was going to be one of the best of this young season.

The result, 35 points of 57% shooting, a great comeback, and a lead heading into the fourth. I’m telling you, as you watch these games, try not to overreact when the Celtics come out slow, you should know by know what that means.

– Harden was nasty. Look I know this is a Celtics blog, but Harden and I have a personal history, and I will always be a Team Harden guy. He is incredible to watch and it pains me when you hear about how hard Ainge tried to get him from OKC. My ideal scenario was he drop 40 and the Celts win. We got pretty close.

– Ok we need to talk about it. The defense is regressing again. The 107 points scored by the Rockets marked the 6th time in seven games that the Celtics have given up over 100 points. Good teams, bad teams it hasn’t seemed to matter, they are giving up way too many points. The Rockets had 59 points at the half, and if it wasn’t for a great third, probably would have been up in the 115-120 range if not more.

What’s crazy is the better defensive lineups the Celtics throw out have been getting shredded. Giving up three quarters of 26 or more points is not how this team usually wins games.

– I say it all the time, this blog is a fair space. When you do well you get the praise, and when you play like shit, it is my duty to be honest about it. Isaiah, this was not one of your better games (despite the 20 points). I thought this was the first game of the season that Isaiah forced his offense a little too much. Finishing with just 3 assists is not who Isaiah is as a basketball player. I thought there were times like on that fast break with Avery that he tried to force a bucket instead of making the right basketball play.

Now don’t get me wrong, he did come up huge at times because that is what Isaiah does, but for a guy who has been incredible in every fourth quarter this year, last night was not in his favor. Once he came in for Rozier, it was a disaster, brutal turnovers early, he went only 1-4 from the field, and that final miss is something we’ll get to.

Again let me be clear, this does not suddenly mean Isaiah is not a “closer” or “go to guy” because he had one bad fourth quarter in 20 games. If you think that you are a fucking moron.

– I know it’s how he makes his living, but it has officially become impossible to guard James Harden. I’ve never seen the Celtics foul so many times while someone is taking a three in my entire life. Credit to him for earning that call, but jesus christ was it frustrating.

– A big part of the reason the Celtics lost this game for me wasn’t so much a missed layup, but instead every time they got any sort of lead, whether it was four, or six whatever, they couldn’t take that next step and go for the throat. They always immediately gave up a HOU run, to either tie it, or fall back behind. They simply needed that like 6-2 run after going up by 6 to give them just enough cushion. Didn’t happen.

– What is going on with Amir Johnson? Suddenly he looks 75 years old. I hope it’s not his feet or something, that shit lingers.

– OK, fine, let’s talk about the misses. First off, this isn’t just all on Al Horford, Isaiah missing his layup was just as bad….and painful. Once he gets past Harden, Horford does a great job in sealing his man which gives Isaiah a WIDE OPEN strong hand layup. Cannot have an easier look for your best player. It’s a layup we’ve seen him make a thousand times. He just didn’t.

With Horford, same thing. A layup we’ve seen him make a thousand times in his basketball career. He got it with plenty of time, and just rushed ever so slightly and put it too strong off the glass. He maybe should have dunked it, but I don’t think the lane was clear enough for how he was coming off that one foot.

Incredibly shitty luck that you’re two best players are going to get two wide open looks at strong hand layups and both are going to miss to lose you the game. I can’t imagine that is ever going to happen again to this team.

– Celtics lost 107-106….this was counted as a two pointer when in real life it is a three pointer. That’s a difference of one point. Hmm.

Big picture, the Celts are still 3rd in the East, and I care more about their upcoming matchup with TOR than I do this game. There’s no way to sugar coat this loss though, it absolutely sucks dropping these winnable games, and it makes you fear that at the end of the season a loss like this comes back to bite you. The beauty of the NBA is they play tomorrow night and we can forget all about this disaster. 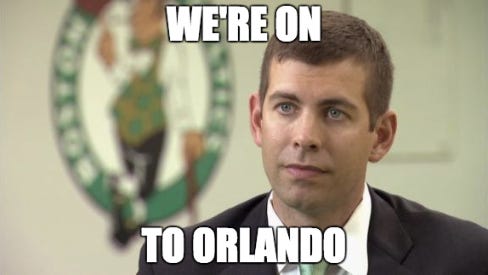