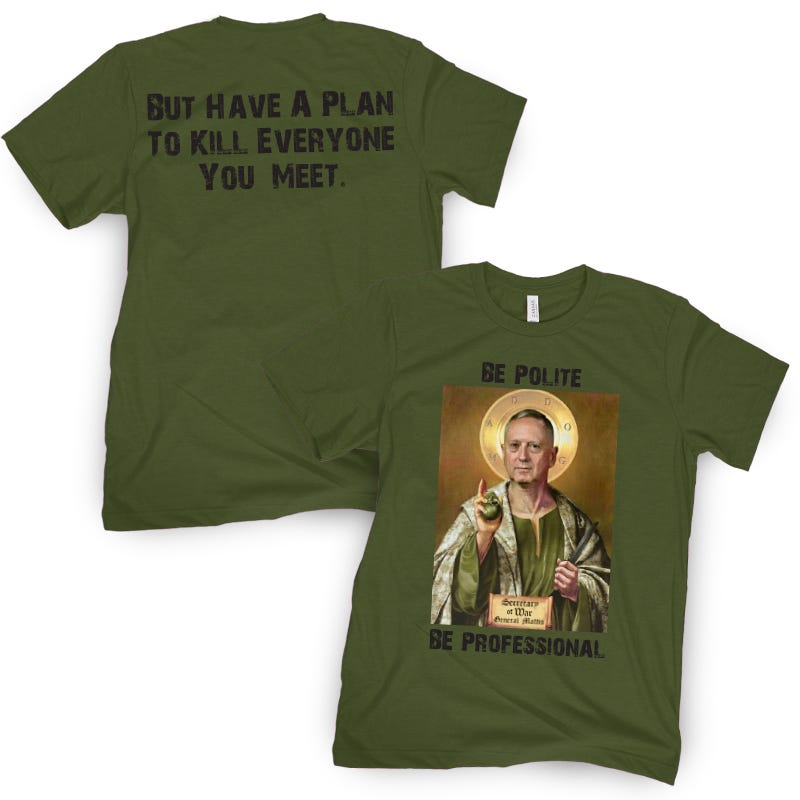 Last week Trump officially tapped General James Mad Dog Mattis for Secretary Of Defense. We’ve talked about this guy pretty extensively on Zero Blog Thirty — he’s a complete savage. A list of some of his top quotes will bring a gigantic smile to your face. Basically the entire country is behind this guy and for good reason.

Our favorite of those quotes?

“Be polite. Be professional. But have a plan to kill everyone you meet.”

Amen, Mr. Secretary. Here’s the list Chaps whipped up detailing how great this guy is and why you should buy his cool new shirt.

“I don’t lose any sleep at night over the potential for failure. I cannot even spell the word.”

“The first time you blow someone away is not an insignificant event. That said, there are some assholes in the world that just need to be shot.”

“I come in peace. I didn’t bring artillery. But I’m pleading with you, with tears in my eyes: If you fuck with me, I’ll kill you all.”

“Find the enemy that wants to end this experiment (in American democracy) and kill every one of them until they’re so sick of the killing that they leave us and our freedoms intact.”

“You go into Afghanistan, you got guys who slap women around for five years because they didn’t wear a veil. You know, guys like that ain’t got no manhood left anyway. So it’s a hell of a lot of fun to shoot them. Actually, it’s quite fun to fight them, you know. It’s a hell of a hoot. It’s fun to shoot some people. I’ll be right up there with you. I like brawling.”

“I’m going to plead with you, do not cross us. Because if you do, the survivors will write about what we do here for 10,000 years.”