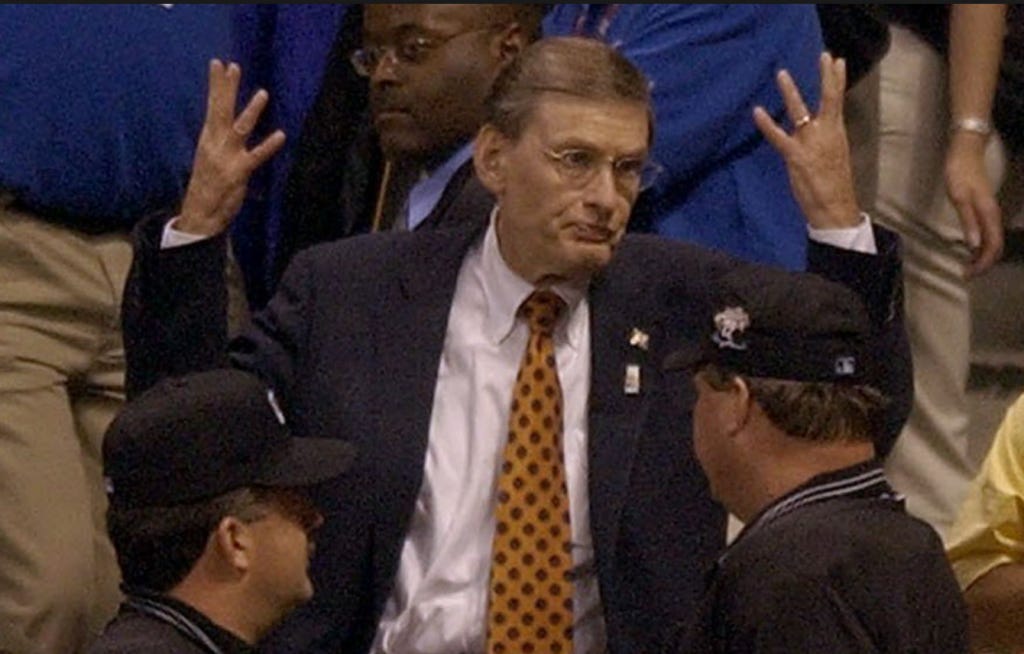 First, let me be clear: it is not Bud Selg’s admission to The Hall that makes me think that the greats from the Steroid Era should be in Cooperstown. I’ve thought that since I was first given my brain. Bonds, Clemens, A-Rod, the lot of them. If don’t give a fuck if they were shaped like GI Joe action figures, they deserve to be in the Hall of Fame. I’m not even talking about in a special wing, or with an asterisk, or any of that dumb shit. I’m talking about just in there like everyone else is in there. All the guys who didn’t have to play against black people or Cubans, and the ones who did greenies, and speed, and the ones who didn’t play night games. Put the steroid guys in the Hall of Fame, it’s that simple and it always has been.

But now? Now there’s no argument at all. You can’t elect the man who GREATLY benefited from looking the other way while players and trainers concocted science experiments in clubhouse bathroom stalls but not elect the actual players. He presided over the home run chase that “saved” baseball and he did it by enabling steroid use. Yeah the players “deserve” some blame if you’re the kind of person who gives a shit about steroids (I’m not, in case you haven’t noticed), but plenty of that falls on Bud Selig. If your boss kept letting you show up late for work and drunk and do drugs in the bathroom without reprimand, and he very clearly knew because everyone from players to executives were talking about it openly and to the media, would you ever stop? Of course not. But Selig knew those steroids were furthering his legacy just as much as the players knew it was furthering theirs, so he let it happen.

Now we’re gonna recognize him as a legend of the game while keeping the door locked on the men who provided him with that title? That’s ridiculous. It was bad enough when Tony LaRussa go in, but Selig is legitimately infuriating. Without the guys like Barry Bonds and Roger Clemens saving the game, Bud Selig’s legacy is that of a man who was at the helm for baseball’s only World Series-less season in 100 years and allowed an All Star game to end in a tie then “fixed” that by implementing a marvelously stupid rule that made the ASG “matter” by declaring that its winner will have homefield advantage in the World Series. That man is in the Hall of Fame but Barry Bonds and Alex Rodriguez won’t be?

Don’t keep out those deserving because of suspicion of steroids or even a failed test. That’s always been the move, but now there’s not even a “morals clause” for the BBWA to invoke. If Bud Selig deserves it, they all do.